Myanmar will not tolerate any violation of its sovereignty and territorial integrity.

Nay Pyi Taw, 31 May—The Ministry of Foreign Affairs of the Republic of the Union of Myanmar issued a press release on 31 May. The full text of the press release is as follows:-

On 28 May 2014, around (MST) 09:00 hour, the Myanmar troops opened fire on two suspected armed Bengalis in yellow camouflage uniform who entered into the Myanmar territory within 80 feet from the Myanmar-Bangladesh border fence between Boundary Pillars 51 and 52 in the Maungdaw Township, Rakhine State and the exchange of fire between the two sides followed. One person was caught dead with one M-22 automatic rifle, four magazines and 98 rounds. The remaining person withdrew into the Bangladesh territory.

With respect to this incident, the Bangladeshi side alleged that the Myanmar side started opening fire on a team of the Border Guard of Bangladesh (BGB) which was patrolling along the border, and captured corporal Md. Mizanur Rahman.

Another exchange of fire between Myanmar and Bangladesh border forces near the Boundary Pillar No 50 occurred on 30 May 2014 at (MST) 16:00 hour, and it lasted about 20 minutes. Again, the Bangladesh side alleged that the Myanmar troops started opening fire on a team of BGB which was waiting to retrieve the dead body captured by the Myanmar side on 28 May 2014.

As for the incident of the exchange of fire on 28 May 2014, there was no BGB team patrolling along the border between Boundary Pillars 51 and 52 on that day, as claimed by the Bangladesh side. The Myanmar troops just opened fire on two suspected armed Bengalis for security reason who were intruding into the Myanmar territory about 80 feet from the border line. The Myanmar troops neither opened fire on any BGB members nor captured a BGB corporal. It was found out that the outfit worn by the person caught dead did not match the BGB uniform.

Concerning the incident of the exchange of fire on 30 May 2014, the Myanmar side informed BGB to come and fetch the dead body at the Boundary Pillar 52 where the exchange of fire had occurred. The allegations by the Bangladesh side that a BGB team was waiting near the Boundary Pillar 50 to fetch the dead body was not relevant and that the Myanmar side started to fire was far from the reality.

The facts stated in these two diplomatic notes from the Bangladesh side are totally far from the real situation on the ground.

Regarding the incidents on 28 May 2014 and 30 May 2014, Myanmar will not tolerate any violation of its sovereignty and territorial integrity; still, the Government of the Republic of the Union of Myanmar will resort to diplomatic means to solve problems peacefully in view of existing bilateral friendly relations and good neighbourliness. 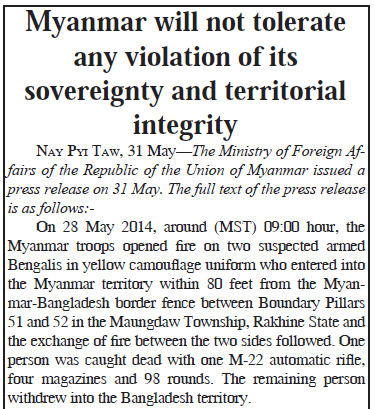