(Ryan Mauro’s article direct from the CLARION PROJECT on 25 June 2014.)

US Homeland Security's Mohammed Elibiary tweeted that Islamist Caliphate in the Middle East is inevitable. Elibiary inferred that he wants the U.S. to support a future caliphate, framing it as a Muslim version of the European Union.

A firestorm has erupted online after senior Department of Homeland Security advisor Mohamed Elibiary tweeted that a “Caliphate” is inevitable and compared it to the European Union. He also recently criticized “drive-by” attacks on Islamism. Elibiary has a history of pro-Muslim Brotherhood advocacy and has close ties to a Hamas financier.

Mohammed Elibiary is on the Department of Homeland Security’s Advisory Council. He is also a long-time official in the Texas Republican Party and was a delegate for Republican presidential nominee John McCain in 2008.


As Clarion Project reported in May 2013, Elibiary sat on a committee tasked with reviewing counter-terrorism training guidelines. The result was predictable: An Islamist-friendly product designed to marginalize Muslim reformers and Brotherhood opponents.

On June 13, Elibiary tweeted that the creation of a caliphate is “inevitable,” and America’s choice is whether to support it or not. He inferred that he wants the U.S. to support a future caliphate, framing it as a Muslim version of the European Union. The tweet is below:

Online supporters of the Islamic State of Iraq and Syria (ISIS), a terrorist group that fights to reestablish the caliphate with Baghdad as its capital, distributed and praised Elibiary’s tweet.

In a follow-up tweet, he claimed that both political parties are “heading in that direction” of supporting a modern caliphate. As evidence, he pointed to the Bush Administration’s appointment of an envoy to the Organization of the Islamic Conference and the Obama Administration’s engagement of the Muslim Brotherhood.

In another tweet on June 21, Elibiary compared “drive by media slander of Islamism” to the segregation-era when African-Americans were treated as second-class citizens. In other words, the critics of the Islamist ideology are bigots. The tweet is below:

The governance of a potential caliphate would be based on sharia. Mosque and state would be combined. Elibiary is aware of this, but says the U.S. should not oppose sharia governance.

“We should remember that them [Islamists] ruling their countries with sharia law doesn’t mean them coming to our country and using our planes to destroy our buildings,” he told me in an extensive interview last year.

The reestablishment of the caliphate presents a direct threat to the West. A future caliph, or leader of a caliphate, would have widely recognized authority—or even an obligation—to declare and wage jihad. Some non-violent Islamists who believe only a caliph can declare jihad would become violent. Daniel Benjamin and Steven Simon write in The Next Attack: 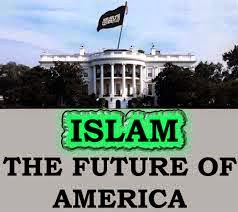 “Some [Salafists] have argued that Al-Qaeda’s tactics violate Islamic standards of honorable combat. Others, including even Omar Bakri Mohammed, argue that only the caliph can declare jihad. Since the caliphate is defunct, there can be no jihad.”

This disagreement about the legitimacy of jihad goes away once there is a caliph. It is universally understood among Islamists that all Muslims are required to participate in a caliph’s jihad to whatever degree they can.

The Reliance of the Traveller is an authoritative manual on sharia law. It is endorsed by Al-Azhar University, the preeminent Islamic authority for Sunni Muslims, as well as the International Institute of Islamic Thought, a Muslim Brotherhood front in the U.S. Here are its official rulings on the duties of a caliph:

O9.8: “The caliph makes war upon Jews, Christians and Zoroastrians…until they become Muslim or else pay the non-Muslim poll tax.”

O9.9: “The caliph fights all other peoples until they become Muslim.” This is referring to those who are not Jewish, Christian or Zoroastrian. The text acknowledges that some scholars believe it is permissible to allow any kind of non-Muslims to live under sharia except those that leave Islam or are Arab “idol worshippers.” The only choice for those are to convert or die.

The resurrection of the caliphate is not in the interests of the West or Muslims that oppose the Islamist interpretation of their faith. It is shocking that a senior Department of Homeland Security official would take such a disingenuous view of the caliphate and boost the morale of Islamists by stating that its resurrection is “inevitable.”

For more on Mohamed Elibiary, read our previous articles:

(Ryan Mauro is the ClarionProject.org’s National Security Analyst, a fellow with the Clarion Project and is frequently interviewed on top-tier TV stations as an expert on counterterrorism and Islamic extremism.

Founded in 2006, the Clarion Project (formerly Clarion Fund Inc) is an independently funded, non-profit organization dedicated to exposing the dangers of Islamic extremism while providing a platform for the voices of moderation and promoting grassroots activism.

Clarion’s award-winning movies have been seen by over 50 million people. They grapple with issues such as religious persecution, human rights, women’s rights, the dangers of a nuclear Iran and what the concept of jihad means for the West. Our dynamic website, viewed by over 900,000 unique visitors in 2013, covers breaking news and provides commentary on relevant issues.