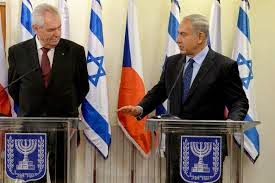 Miloš Zeman, the president of Czech Republic, gave the following speech last Monday (May-26) at a reception to celebrate Israel’s Independence Day. Many thanks to Gemini for the translation from the official text posted at the Czech government’s website.

Following is direct translation of that speech by the president of the Czech Republic at the reception held to celebrate Israel’s Independence Day on May 26, 2014.

Let me thank you for the invitation to celebrate Israel’s Independence Day. There are dozens of days of independence being celebrated every year in the Czech Republic. Some I may attend, others I cannot. There is one I can never miss, however: it’s the Israeli Independence Day.


There are states with whom we share the same values, such as the political horizon of free elections or a free market economy. However, no one threatens these states with wiping them off the map. No one fires at their border towns; no one wishes that their citizens would leave their country.

There is a term, political correctness. This term I consider to be a euphemism for political cowardice. Therefore, let me not be cowardly. It is necessary to clearly name the enemy of human civilisation. It is international terrorism linked to religious fundamentalism and religious hatred.

As we may have noticed after 11th of September, this fanaticism has not been focused on one state exclusively. Muslim fanatics recently kidnapped 200 young Christian girls in Nigeria. There was a hideous assassination in the flower of Europe in the heart of European Union in a Jewish museum in Brussels.

I will not let myself being calmed down by the declaration that there are only tiny fringe groups behind it. On the contrary, I am convinced that this xenophobia, and let’s call it racism or anti-Semitism, emerges from the very essence of the ideology these groups subscribe to.

However, I know of one anti-civilisation movement calling for the mass murder of Jews. After all, one of the paragraphs of the statutes of Hamas says: “Kill every Jew you see.” Do we really want to pretend that this is an extreme viewpoint? Do we really want to be politically correct and say that everyone is nice and only a small group of extremists and fundamentalists is committing such crimes?

Michel de Montaigne, one of my favourite essayists, once wrote: “It is gruesome to assume that it must be good that comes after evil. A different evil may come.” It started with the Arab Spring which turned into an Arab winter, and a fight against secular dictatorships turned into fights led by Al-Qaeda.

Let us throw away political correctness and call things by their true names. Yes, we have friends in the world, friends with whom we show solidarity. This solidarity costs us nothing, because these friends are not put into danger by anyone.

The real meaning of solidarity is a solidarity with a friend who is in a trouble and in danger, and this is why I am here.

Czech President Refuses to Apologize for His Anti-Islam Remarks 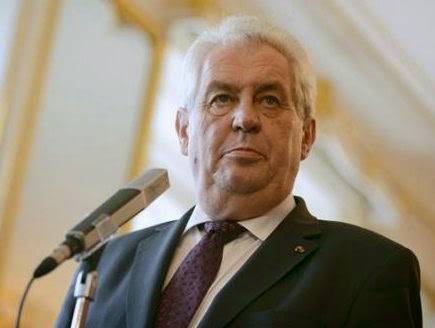 President Miloš Zeman of the Czech Republic had some forthright and unflattering things to say about Islam at a closed-door reception to celebrate Israel’s Independence Day. The Organization of Islamic Cooperation (OIC) took note of Mr. Zeman’s speech, expressed its disappointment and disapproval, and demanded an apology.

True to form, the Czech president has declined to apologize for his words, giving a sound theological justification for his decision. Our Czech correspondent Gemini has translated the quote released in the Czech media, and includes this note:

There is only a brief response from Miloš Zeman. The media quote only those two sentences; the rest of their reports consist of quotations of parts of his previous speech, the OIC’s response, etc.

President Miloš Zeman is not going to apologise for his statements in which he linked Islamic ideology with violence. His words were conveyed by his spokesperson Jiří Ovčáček: “President Zeman definitely does not intend to apologise. For the president would consider it blasphemy to apologise for the quotation of a sacred Islamic text.”


As far as I am aware, Miloš Zeman is the first Western head of state ever to tell the OIC to go jump in a lake. So this is an historic occasion.

(Following video is the ISIS Islamists executing Iraqi Soldiers and policemen.)
Posted by Hla Oo at 12:06 AM