(Extracts of Prologue from Dexter Filkins’s “The Forever War” published in 2008.) 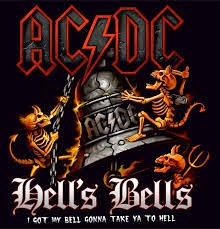 Fallujah, Iraq, November 2004: THE MARINES were pressed flat on a rooftop when the dialogue began to unfold. It was 2 a.m. The minarets were flashing by the light of airstrikes and rockets were sailing on trails of sparks.

First came the voices from the mosques, rising above the thundery guns. “The Americans are here!” howled a voice from a loudspeaker in a minaret. “The Holy War, the Holy War! Get up and fight for the city of mosques!”

Bullets poured without direction and without end. No one lifted his head. “This is crazy,” one of the marines yelled to his buddy over the noise. “Yeah,” the buddy yelled back, “and we’ve only taken one house.”

And then, as if from the depths, came a new sound: violent, menacing, and dire. I looked back over my shoulder to where we had come from, into the vacant field at Fallujah’s northern edge. A group of marines were standing at the foot of a gigantic loudspeaker, the kind used at rock concerts.


It was AC/DC, the Australian heavy metal band, pouring out its unbridled sounds. I recognized the song immediately: “Hell’s Bells,” the band’s celebration of satanic power, had come to us on the battlefield. Behind the strains of its guitars, a church bell tolled thirteen times.

I'm rolling thunder, pouring rain
I'm comin’ on like a hurricane
My lightning's flashing across the sky
You're only young but you're gonna die

The marines raised the volume on the speakers and the sound of gunfire began to recede. Airstrikes were pulverizing the houses in front of us. In a flash, a building vanished. The voices from the mosques were hysterical in their fury, and they echoed along the city’s northern rim.

“Allahu Akbar!” cried one of the men in the mosques. “God is great!” There is nothing so glorious as to die for God’s path, your faith, and your country!”


I won't take no prisoners, won't spare no lives
Nobody's putting up a fight
I got my bell I'm gonna take you to hell
I'm gonna get ya,  Satan get ya!

The shouting continued until the houses in front of us were obliterated and the firing and the music began to die. 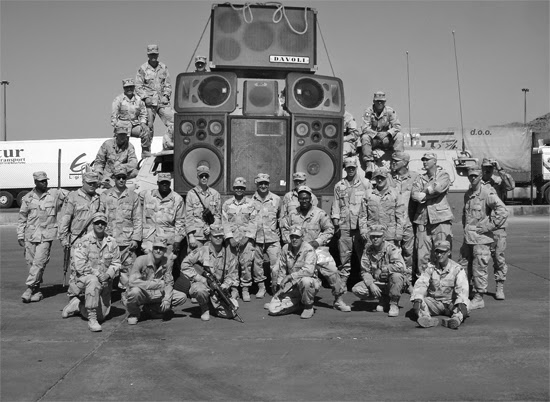 We broke into a trot, our boots thudding on the pavement like hooves, rounding a corner, to the right, to the left, up Tharthar Street, when a jeep, a blue Cherokee, entered our flowing ranks. The doors swung open.

I was still running and wrenching my head to see when a bunch of men piled out with guns and rocket-propelled grenades. Suddenly I saw them: black eyes, pale skin, and baggy gray suits with ammo belts. 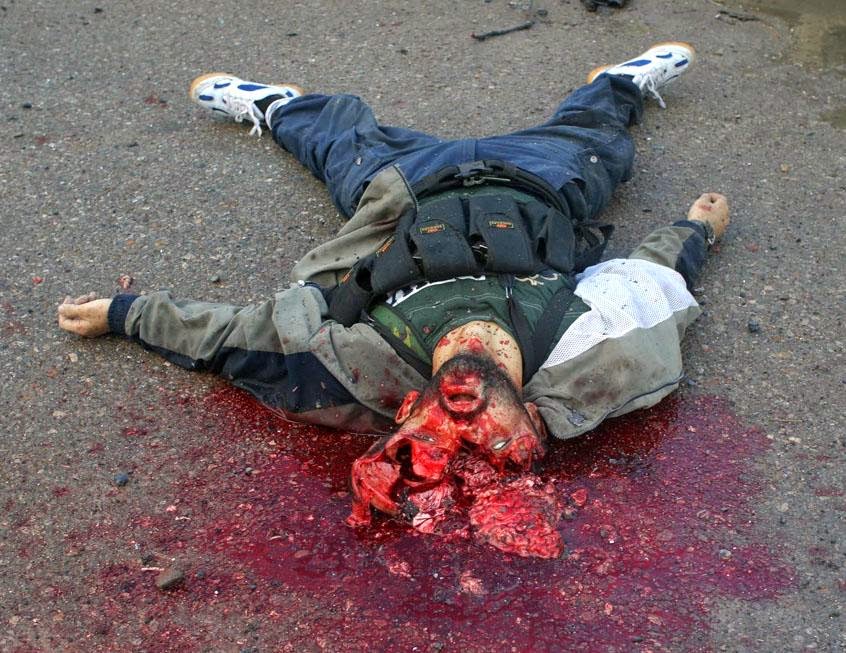 I thought they had us, they thought they had us, when the marines on the roof opened fire. The head of one of the jihadis burst like a tomato, the deep red of his brainy blood spattering against his clammy skin and his head disappearing. The jihadi fell back onto the street and spread his arms wide like a headless Christ.

Three more jihadis died right there on Tharthar Street and two of them scampered away. A couple of kids (really-young marines) ran them down and shot them, and one of the wounded jihadis rolled over on the ground and pulled something on his jacket and exploded.

The kids started slapping plastic explosives onto the Cherokee, taking out big cakes of it and throwing it on, and one of them said it’s going to blow, and somebody yelled, “Fire in the hole!” and we got behind a wall and the earth shook and the jeep disappeared. An axle remained in the road and a piece of engine block and some smoke. The jihadis were gone. Like the moment never happened.

We gathered in an enclosed area behind a brick wall, spilling into it, the clop-clop of boots and clangs of metal and heavy breathing.

There were forty of us, Bravo Company’s First Platoon, and Australian photographer Ashley Gilbertson and me. More nineteen-year olds (marines) went up to the roof with their giant guns. A road lay in front of us, a six-lane boulevard, one of Fallujah’s main drags called 40th Street.

Just then the insurgents spotted us, and they opened up from both ends of the road. Bullets flew up the boulevard and down, thousands of bullets, multitudes of them, crisscrossing in front of us.

The marines opened fire at once, screaming and shooting, everybody’s guns on full auto, shouting and shooting. All the testosterone of forty young men. They clambered for space along the top of the wall where they could fire, standing on oil drums and old washing machines.

I stood against the bricks, the boots of the kids level with my head, and felt strangely safe, almost serene against the roar of the guns. The one safe place. Bullet casings tumbled over my shoulders.

Captain Read Omohundro (the34-year old stocky Texan and the Commander of Bravo Company, First battalion, Eighth Marine) was on his knee, and his radio man, Sergeant Kenneth Hudson was handing him the radio. Omohundro yelled something and the American artillery started coming in.

One shot after another landed on the building from which the gunfire was coming, one of them Mohammadiya Mosque. The artillery was too accurate to believe; American guys a mile back were dropping 155 mm howitzer shells right through the ceilings, one after the other after other, each one coming in with the whistle of a train. 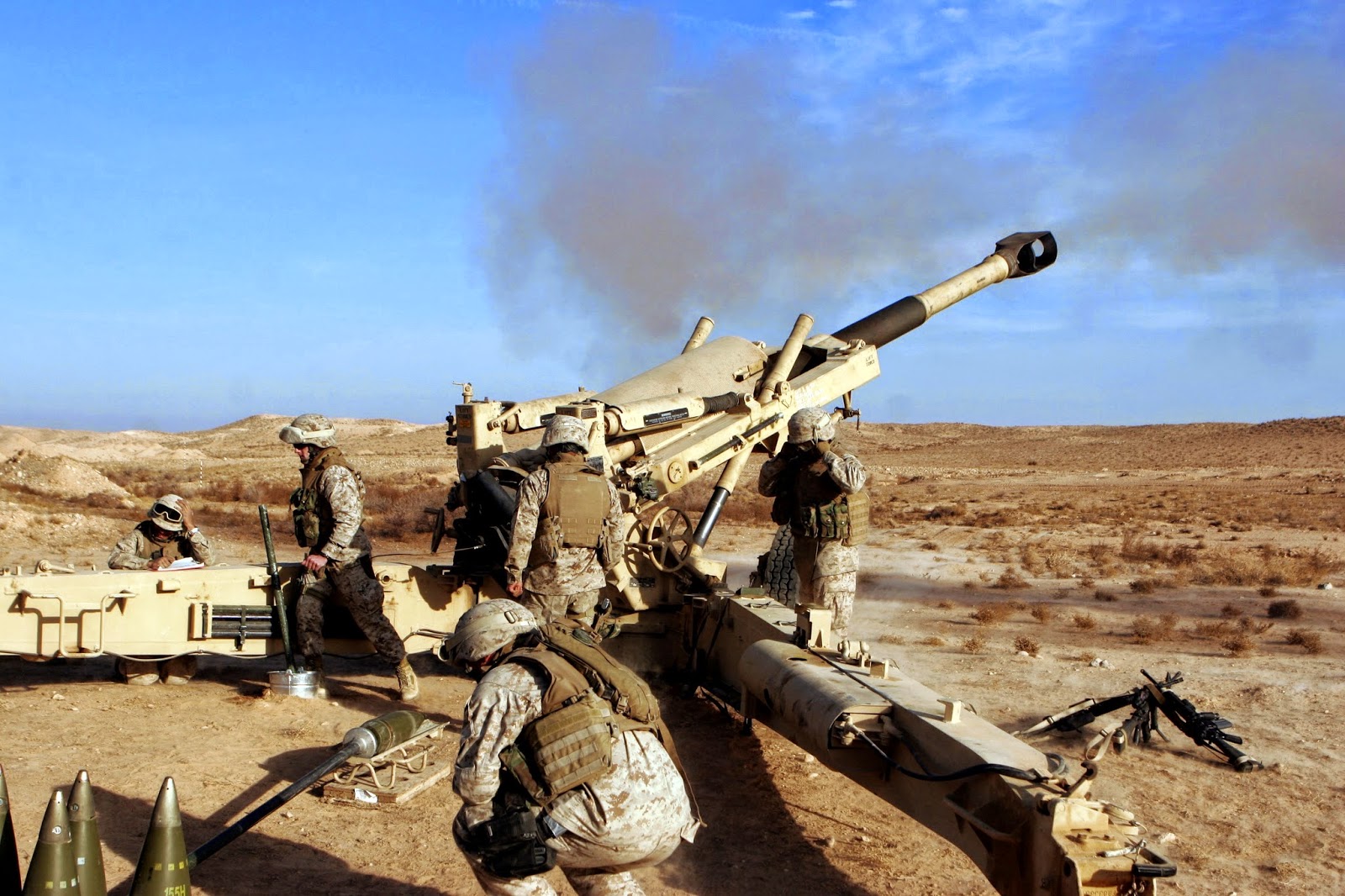 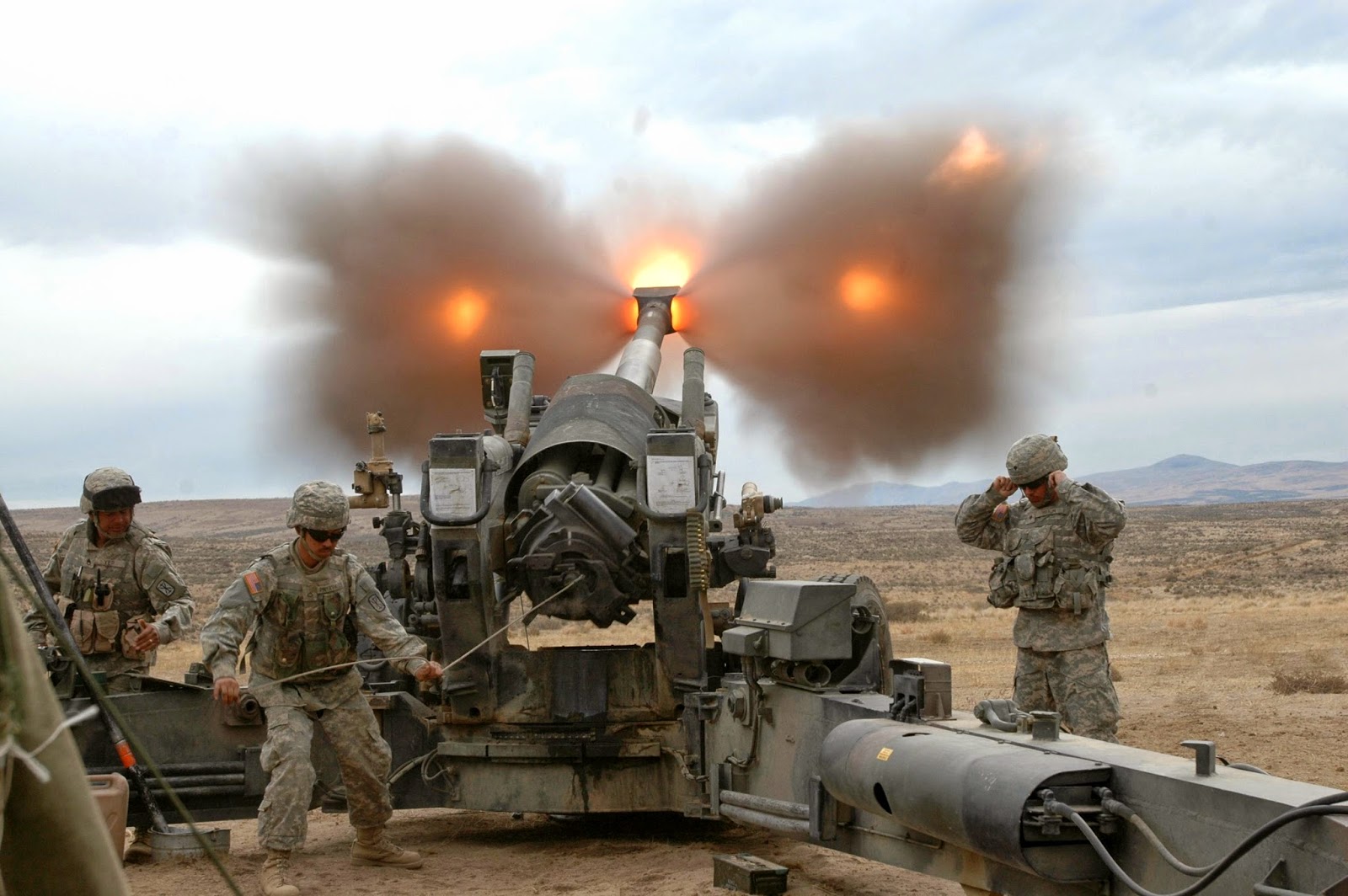 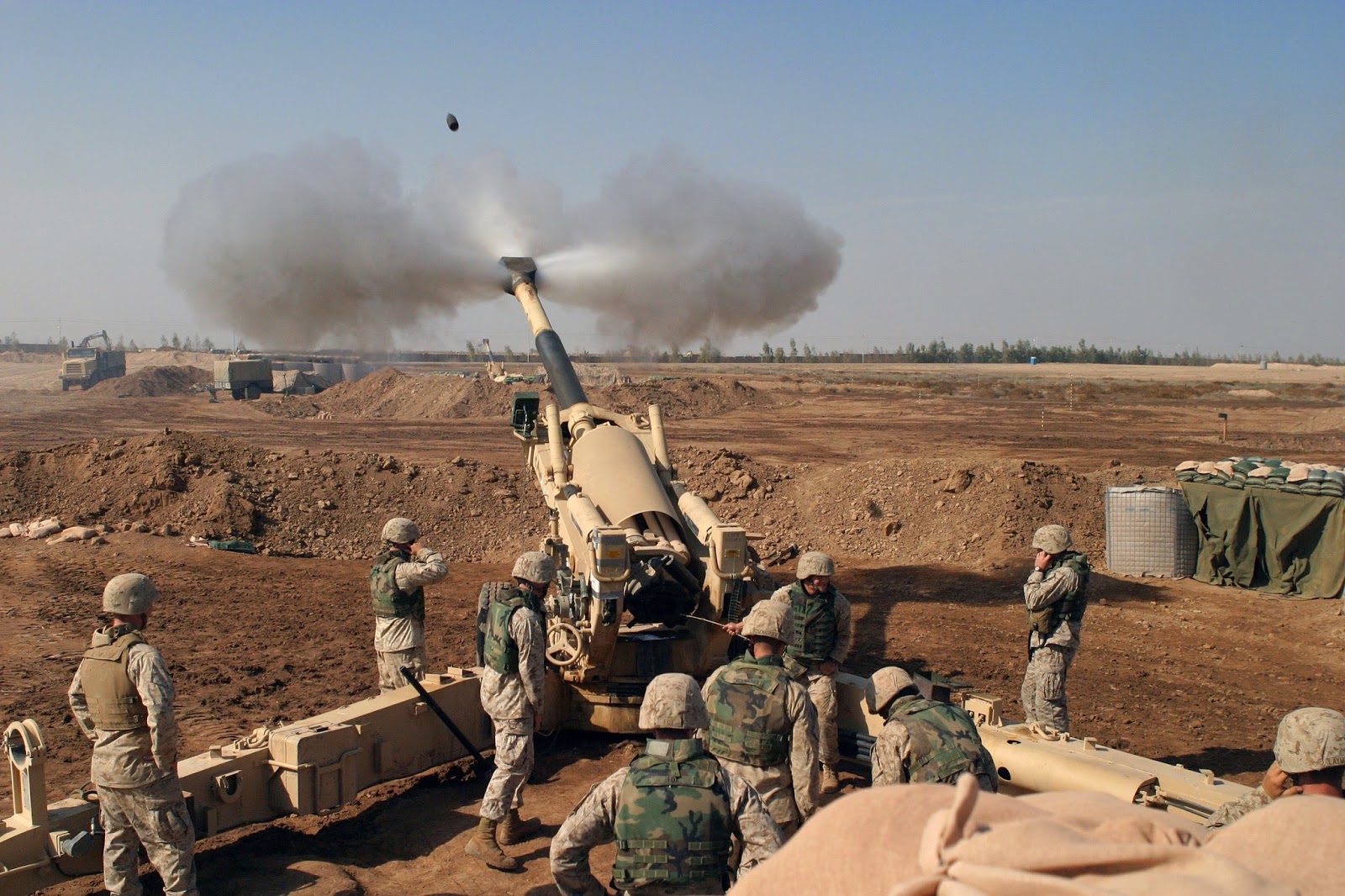 I kept running, pumping, flying toward the other side as fast as I could with my seventy pounds of gear when I saw a pair of marines standing in a doorway and waving me to come on, come on.

I ran straight for them and I could see by the looks on their faces they weren’t sure I was going to make it. They were holding their arms out like they wanted to save me, and I reached them and they grabbed me by my pack and threw me through the door.

I lay on the floor for a minute as I regained my senses and thought I was nothing so much now as a child. A child in his crib in the care of his parents, they nineteen and me forty-three.

I found Ashley lying against a wall; he nodded that he was okay. Then I found Captain Omohundro, who had planted himself on the second floor. Steady as a brick. He was standing next to a window, scanning the scene, and he raised his hand over his shoulder and asked for the radio. Snapped his fingers.

“Hudson, radio,” Omohundro said.
“Hudson, give me the radio,” he said again.
He turned around.
“He’s been shot, sir,” someone said.

Hudson was one of five guys hit crossing 40th Street; he lived. Sergeant Lonny Wells, of Vandergrift, Pennsylvania, bled to death on the spot, right in front of us. His worried eyes looking upward as his life ebbed away.

The shooting began to fade. I looked out the window with Omohundro. We were standing across the street from the Mohammadiya Mosque, badly damaged and smoking but still resplendent with its shot-up green dome. A squad of bedraggled marines were circling the mosque, moving around and peering into the windows but not venturing inside. 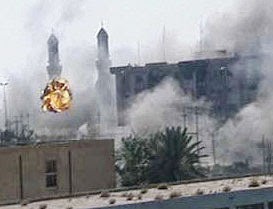 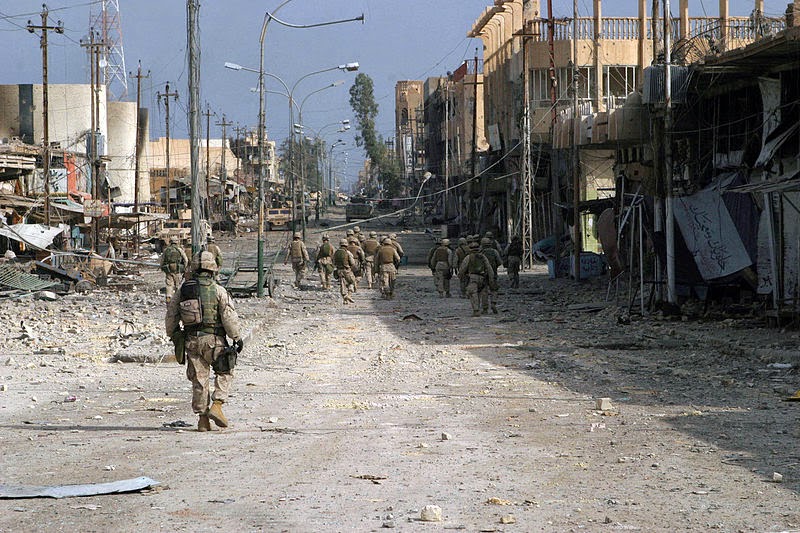 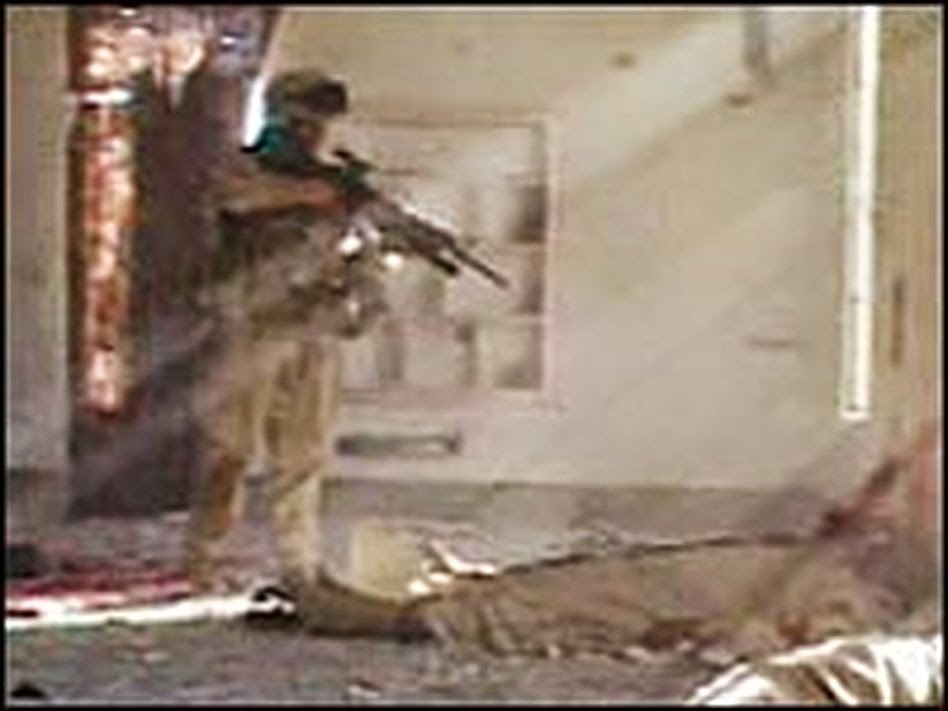 The Marines were part of a U.S.-led offensive to clear Fallujah of its insurgent strongholds. Sites' video shows five men wounded from the previous day's fighting lying on the floor of the mosque. One Marine can be heard shouting to others that a man was only "playing dead." The Marine corporal in question appears to fire a round from his weapon into the Iraqi's head, and another Marine says, "Dead now."

The U.S. Marine Corps later announced that it won’t prosecute that Marine corporal, who was not identified, for his actions. In a statement, Maj. Gen. Richard F. Natonski said that an investigation including a review of the videotape of the shooting had determined that the Marine's action "was consistent with the established rules of engagement and the law of armed conflict."

According to press reports, General Natonski said that the Marine corporal involved in the shooting could reasonably have assumed that the wounded Iraqi posed a threat. The general said that the tape showed the Iraqi fighter's left arm was concealed behind his head, and that feigning death or serious injury was a common tactic among insurgents who would then continue to fight.

It was led by the U.S. Marine Corps against the Iraqi insurgency stronghold in the city of Fallujah and was authorized by the U.S.-appointed Iraqi Interim Government. The U.S. military called it “some of the heaviest urban combat U.S. Marines have been involved in since the Battle of Huế City in Vietnam in 1968.

This operation was the second major operation in Fallujah. Earlier, in April 2004, Coalition Forces fought the First Battle of Fallujah in order to capture or kill insurgent elements considered responsible for the deaths of a Blackwater Security team.


When Coalition Forces (the majority being U.S. Marines) fought into the center of the city, the Iraqi government requested that the city’s control be transferred to an Iraqi-run local security force, which then began stockpiling weapons and building complex defenses across the city in mid-2004.) 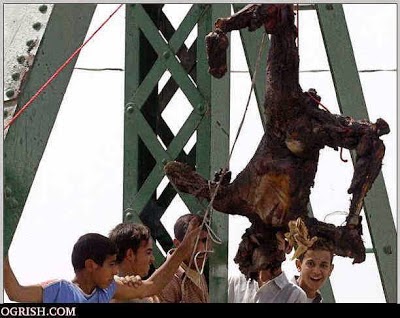 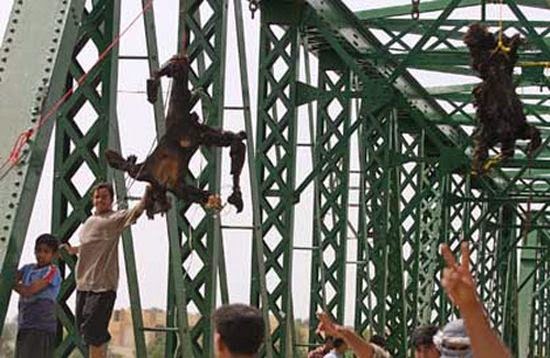 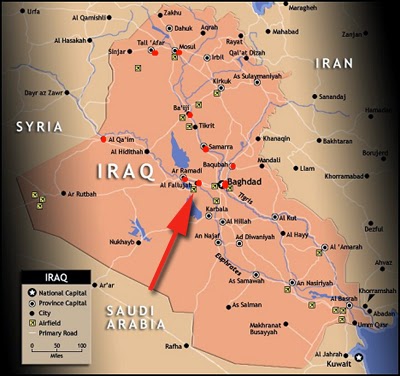