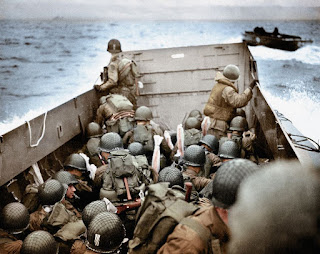 D-Day: Veterans and world leaders mark 75th anniversary: Hundreds of veterans gathered in France to honour the sacrifice of those who died in the D-Day landings, drawing to a close two days of commemorations.

World leaders attended ceremonies honouring Allied forces who fought in the largest combined land, air and naval operation in history. Wreaths were laid, a minute's silence was held and veterans linked arms and sang, before watching an RAF flypast.

Theresa May and Emmanuel Macron thanked veterans who took part in June 1944. President Donald Trump called former US soldiers "the pride of the nation". Throughout the day, key events were marked from the wartime operation at the start of the campaign to liberate Nazi-occupied north-west Europe.


By nightfall on 6 June 1944, some 156,000 Allied troops - including British, US and Canadian forces - had landed on Normandy's beaches, despite challenging weather and fierce German defences. The Allies established a foothold in France and within 11 months Nazi Germany was defeated and the war in Europe was over.

At 06:26 BST - the exact minute the first British troops landed on the beaches in 1944 - a lone piper played on a section of the Mulberry Harbour in the French town of Arromanches. Mr Macron and Mrs May - in one of her final engagements as Conservative leader - were in Ver-sur-Mer to see the first stone laid for a memorial to commemorate the 22,442 British troops who died there in the summer of 1944.

The memorial, which overlooks Gold Beach, depicts three soldiers advancing across the sand.Mrs May said she was humbled to be able to mark the moment with veterans, who belonged to a "very special generation".

"A generation whose unconquerable spirit shaped the post-war world. They didn't boast. They didn't fuss. They served," she said. "And they laid down their lives so that we might have a better life and build a better world. If one day can be said to have determined the fate of generations to come in France, in Britain, in Europe and the world, that day was 6 June, 1944," she added.

Also paying tribute, Mr Macron said: "This is where young men, many of whom had never set foot on French soil, landed at dawn under German fire, risking their lives while fighting their way up the beach, which was littered with obstacles and mines."

The French president also went on to say he was proud to have worked with Mrs May. "Leaders may come and go but their achievements remain. The force of our friendship will outlast current events," he said. 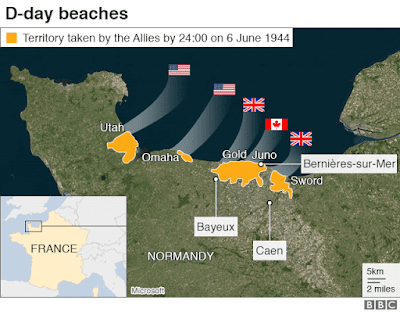 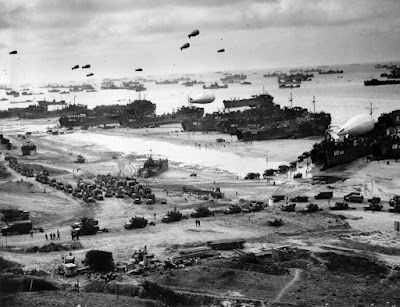 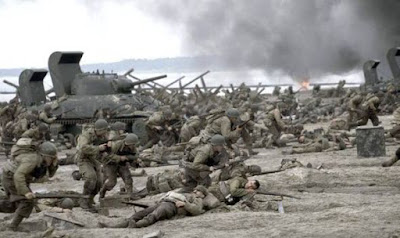 Mrs May, the Prince of Wales, the Duchess of Cornwall, Labour leader Jeremy Corbyn and Scotland's First Minister Nicola Sturgeon later attended a service at the cathedral in Bayeux, the first city to be liberated by the invasion.


A message was read out on behalf of Pope Francis, in which he said D-Day was "decisive in the fight against Nazi barbarism". He also paid tribute to those who "joined the Army and gave their lives for freedom and peace". The service was followed by a ceremony at Bayeux War Cemetery, where many of the fallen are buried.

Among the veterans who attended the commemorations was Len Fox, who took part in a rendition of We'll Meet Again. The 94-year-old, who lives in Norwich, landed in the town on D-Day with the 53rd Welsh Division as a dispatch rider. He said: "Being here for the anniversary is my way of paying back a little to my comrades who didn't make it. "I wasn't a hero, I was a frightened 19-year-old. They were the brave heroes."

Harry Billinge, 93, from St Austell in Cornwall, was on a final pilgrimage to Normandy to see how thousands of pounds he raised had helped the construction of a national memorial honouring his fallen comrades. He handed over more than £10,000 to the Normandy Memorial Trust after collecting donations in his local high street and Arromanches.

As an 18-year-old Royal Engineer, he landed on Gold Beach at 06:30 on 6 June 1944 as part of the first wave of troops. Mr Billinge said this was his "swansong" and he did not think he would return again, but he was eager to see the first foundation stones of the monument laid on Thursday morning. 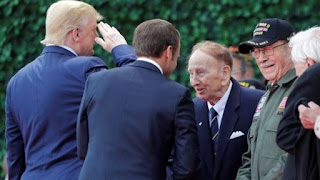 Meanwhile, Mr Trump accompanied Mr Macron at a ceremony at the US war cemetery at Omaha Beach, Colleville-sur-Mer. He told veterans gathered there: "You are among the greatest Americans who will ever live. You are the pride of the nation. You are the glory of our republic and we thank you from the bottom of our hearts."

He read: "Four years ago our nation and empire stood alone against an overwhelming enemy, with our backs to the wall. Now, once more, a supreme test has to be faced." He added: "This time, the challenge is not to fight to survive but to fight to win the final victory for the good cause. At this historic moment, surely not one of us is too busy, too young, or too old to play a part in a nationwide, perchance a world-wide, vigil of prayer as the great crusade sets forth."

During Prince Harry's visit to Royal Hospital Chelsea, he joked with Chelsea Pensioners and asked them "Who's your favourite?" while gesturing to hospital staff. On Wednesday, leaders from every country that fought alongside the UK on D-Day joined the Queen in Portsmouth for the first day of the 75th anniversary events. The Queen paid tribute to the "heroism, courage and sacrifice" of those who died.

Around 300 veterans were then waved off on the cruise ship MV Boudicca as it headed to the Normandy commemorations. Two veterans - Harry Read, 95, and John Hutton, 94 - parachuted back into Normandy, 75 years after their first landing, accompanied by members of the Army's Parachute Regiment display team. 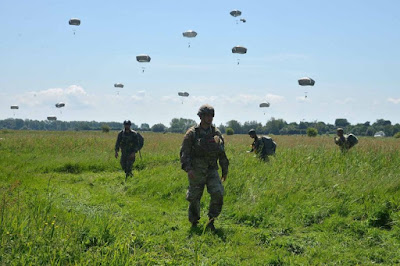 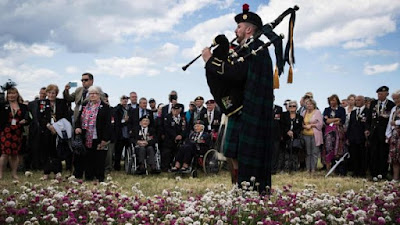 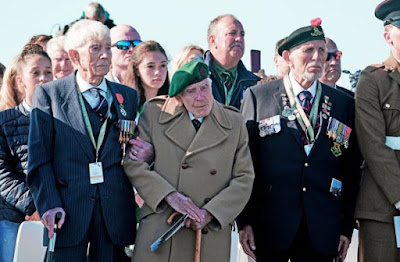 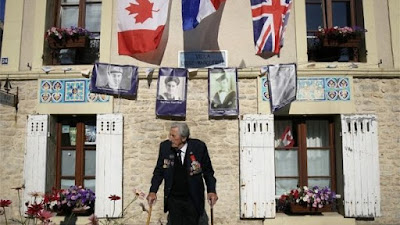