The Los Angeles Disease Renaissance: Typhoid And Typhus Make A Comeback. As the homeless population in Los Angeles grows, so does the unfortunate revival of many third world diseases.

Despite hundreds of millions of dollars flowing through Los Angeles to stem the rising tide of homelessness, a resurgence of medieval diseases has the city – and neighboring states – on edge. Typhoid fever and typhus, borne by fleas, body lice, and feces, are turning the once glitzy and glamorous city into a third-world worthy environment.

Yes, Typhoid Mary is back, in a sense, living on the streets and wreaking havoc on unsuspecting people in the Golden State. These diseases, along with an uptick in tuberculosis, hepatitis A, and staph, are easily and rapidly spread and have wide-reaching consequences. They’re highly contagious and can infect anyone through casual contact.


An LAPD officer was recently diagnosed with typhoid, and several other city employees are exhibiting the classic symptoms of high fever, muscle pain, and weakness. Left untreated, the disease can be fatal – and let’s face it: The malady wiped out entire populations during the Dark Ages and took a heavy toll on American Civil War soldiers and early American settlers. Some historians blame the malaise for obliterating the Jamestown settlement.

Where The Heck Did They Come From?

Los Angeles Homeless Services Authority recently released a report showing 59,000 people living on the streets in Los Angeles County – a 12% increase since 2018 – with 36,300 of them within the city limits of Los Angeles. The U.S. Department of Housing and Urban Development (HUD), reports that “California accounted for 30% of all people experiencing homelessness as individuals” throughout the United States.

The progress of these once eradicated and near eradicated diseases is so alarming that the politicians who once spent copious amounts of time covering up the warts and putrid pustules in their liberally run cities and state are now showing disbelief and disgust.

California Governor Gavin Newsom (D) broke his silence during his state of the state speech in February: “Our homeless crisis is increasingly becoming a public-health crisis. Typhus, a medieval disease. In California. In 2019.” 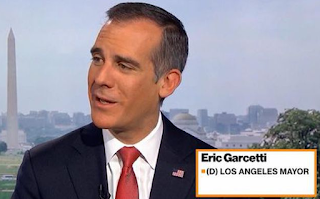 Los Angeles Mayor Gil Garcetti (D), who many believed would be a 2020 presidential contender, calls the crisis, “the biggest heartbreak for me and my city.” Garcetti campaigned extensively for the initiative known as Proposition HHH, which designated $1.2 billion over the next ten years to build homeless housing.

Voters passed Propositions 47 (2014) and 57 (2016), downgrading theft and drug offenses to misdemeanors and redefining many felonies from violent to nonviolent to release a horde of inmates – some addicted to drugs and suffering from now untreated mental illness.

And they wonder why there are so many people on the streets living, sleeping, and breathing surrounded by urine-soaked sidewalks and piles of human feces? And, of course, they don’t have to show symptoms to carry and transfer these diseases – simple casual contact from a carrier will do just fine.

Asymptomatic Mary Mallon was presumed to have infected over 50 people between 1907 and 1915, yet never experienced a day of sickness. She died under quarantine – from complications of a stroke, not typhoid. Her body was cremated and her ashes interred, but her legacy as Typhoid Mary lives on.

Garcetti is doubling down on his homeless housing project, but his highest hurdle is his choice for building sites. It seems no Angeleno wants drugs, typhus, and hepatitis bubbling and festering on their own block. A short story made long, aside from Proposition HHH, there is no solid plan to curb the worsening rotting of Los Angeles.

There is a long-held belief that two American presidents succumbed to Typhoid. The ninth Commander in Chief, William Henry Harrison, is remembered to have died of pneumonia after only 31 days in office, but recent studies suggest he likely died from typhoid. Number 12, President Zachary Taylor, was most likely felled from the disease as well – due to the unsanitary conditions in the Swamp in the mid-19th century. Ironically, the only thing that seems to have changed in Washington, D.C. is that the deadly infections are in the heart and soul and not the body of the toadies on the Hill.

Here we are in the throes of the 21st century with running water, inoculations for just about every known malady of the last millennia, and welfare programs to heal the poorest of our citizens. Yet Los Angeles remains a hot, malodorous, infectious mess – and it could be spreading toward a city near you.
Los Angeles Provides Ugly Picture of America Under Democrats

Los Angeles is known as the City of Angels but in today’s reality, it has become the city of demons, devils and Democrats, which may all be the same entities. Since July 1, 1961, Los Angeles has only had 1 Republican mayor and he, Thomas Bradley, wasn’t the greatest representative of the Republican Party.

The current mayor, Eric Garcetti is a great representative of the Democratic Party. Garcetti has been running the city since July 1, 2013. Garcetti has pushed to increase the minimum wage in Los Angeles, including an increase to $15.37 an hour for hotel workers. In 2014, Garcetti declared Los Angeles to be a sanctuary city for illegal aliens and announced that the Los Angeles Police Department would not honor most requests from federal officials to detain illegal aliens.

Basically, Garcetti is continuing the tradition of running Los Angeles the way Democrats want to run the United States. Consequently, if one takes a look at Los Angeles, they will see a really ugly and bleak view of America under Democratic rule as recently reported:

“The City of Angels is looking a whole lot more like a Den of Demons these days, as the second-largest city in the United States descends into ‘complete breakdown,’ according to Dr. Drew Pinsky, a longtime L.A. resident and radio personality who gave his take on the current crumbling state of the world’s biggest entertainment hub during a recent episode of ‘The Ingraham Angle’.”

“Rampant illegal immigration, homelessness, rodent infestation, and infectious disease are just a few of the many serious problems afflicting today’s LA, according to reports. And in the eyes of Dr. Pinsky, the California mecca is now, in many ways, worse off than many Third World countries because of it all.”

“‘We have a complete breakdown of the basic needs of civilization in Los Angeles right now,” Dr. Pinsky stated frankly to Laura Ingraham during the segment. “‘We have the three prongs of airborne disease, tuberculosis is exploding, (and) rodent-borne. We are one of the only cities in the country that doesn’t have a rodent control program, and sanitation has broken down,’ he further explained.”

“Dr. Pinsky’s contentions come on the heels of disturbing reports about the spread of life-threatening illnesses like typhoid fever and bubonic plague, both of which are making a comeback in L.A. An L.A. police officer reportedly contracted typhoid fever recently, and bubonic plague, which killed tens of millions of people during the 14th century, is also ‘likely’ spreading in L.A. as well, according to Dr. Pinsky.”

Additionally, Los Angeles has been among the nation’s top 5 cities for homicides in recent years, and yet, California has been busy passing many gun control laws to prevent violence. There are entire areas of Los Angeles that are not safe for women and children of any skin color or ethnic background.

In many of those areas, it’s not safe for a Caucasian male to wander the streets or even drive through them. One person told me that portions of Los Angeles reminded him of the ghettos and drug cartel-controlled and gang-controlled areas in Mexico.

Given the chance to take control of the White House and both branches of Congress, much of the rest of the United States will soon look just like Los Angeles, which should be renamed Los Diablos, the city of devils instead of angels. 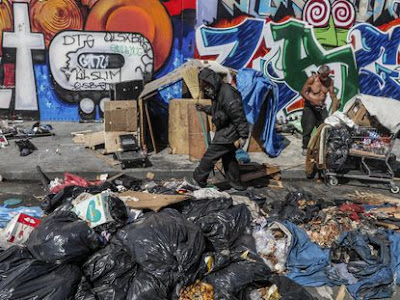 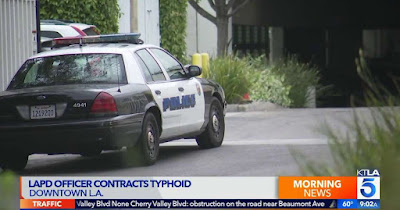