(Translation of News article direct from the MYANMAR NAVY on 31 March 2014.)

At the ceremony the newly-built second stealth-frigate with hull-code F14 was named UMS Sin-phyu-shin. Sin-phyu-shin or Sinbyushin meaning literally “The Possessor of White Elephant” was a famous Burmese king from Burma’s glorious imperial past.

Burma Navy’s second locally-built frigate Kyan-sit-thar (F12) -- the first locally-built stealth-frigate of burma Navy -- is now being fitted with her latest electrical and communication and weapon systems and expected to be commissioned this year 2014.


Burma Navy’s first locally-built frigate Aung-zay-ya (F11) is already the proud flag-ship of our Burma navy successfully turning itself into a blue-water navy from a formerly muddy-water navy of coastal and inland water naval boats. Another 108m frigate F13 still unnamed is currently being built at Thilawar Naval Dockyards.

Frigate Sin-phyu-shin is expected to be fitted with latest Chinese-made ship-destroyer C-602 missiles and the outcome clearly is Burma navy will soon have the best anti-ship missiles of any navy in Southeast Asia. Burma Navy currently deploys two other types of anti-ship missile from China, the C-802 and C-802A, on most of her guided-missile frigates and FACs (Fast Attack Crafts).

Other advanced anti-ship missiles on board two of Myanmar's most advanced frigates, the F11 and F12, are the Russian-made Kh35 missiles with a range of 130 kilometers. With a diisplacement of more than 3,000 tons the F11  Aungzeya and F12 Kyansitthar are each carrying eight 3.85 meter-long Kh35E missiles. 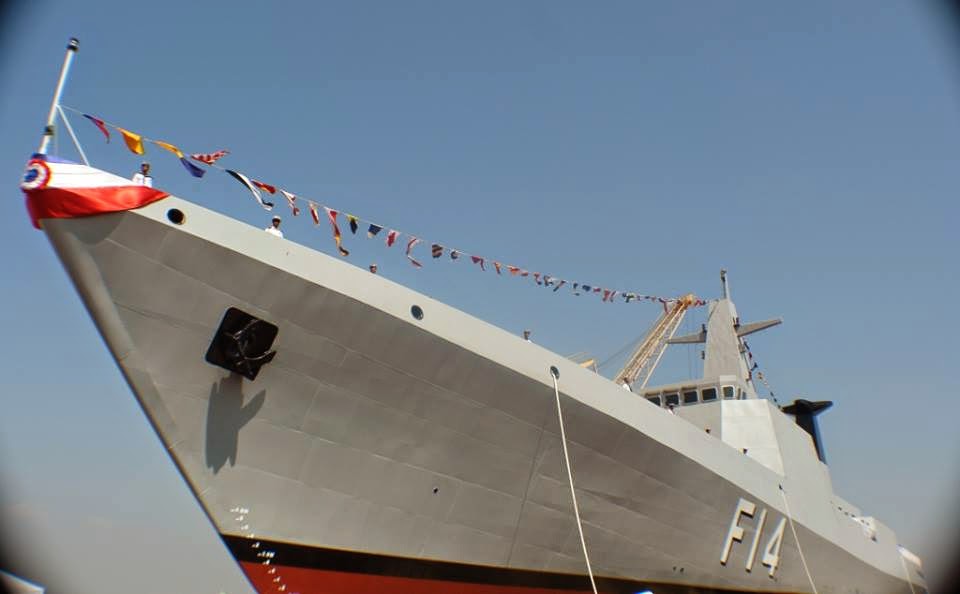 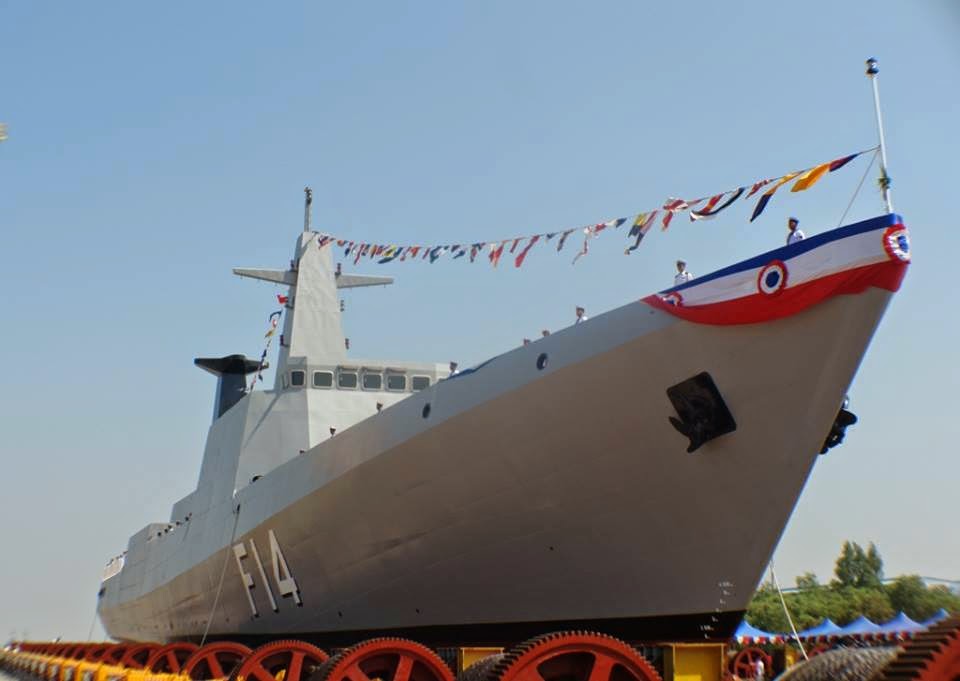 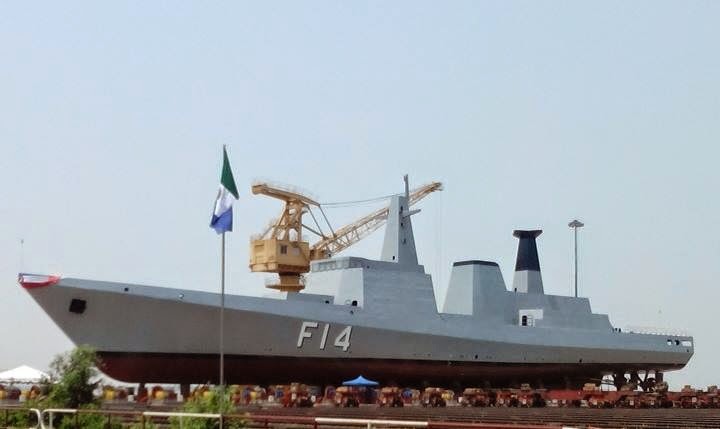 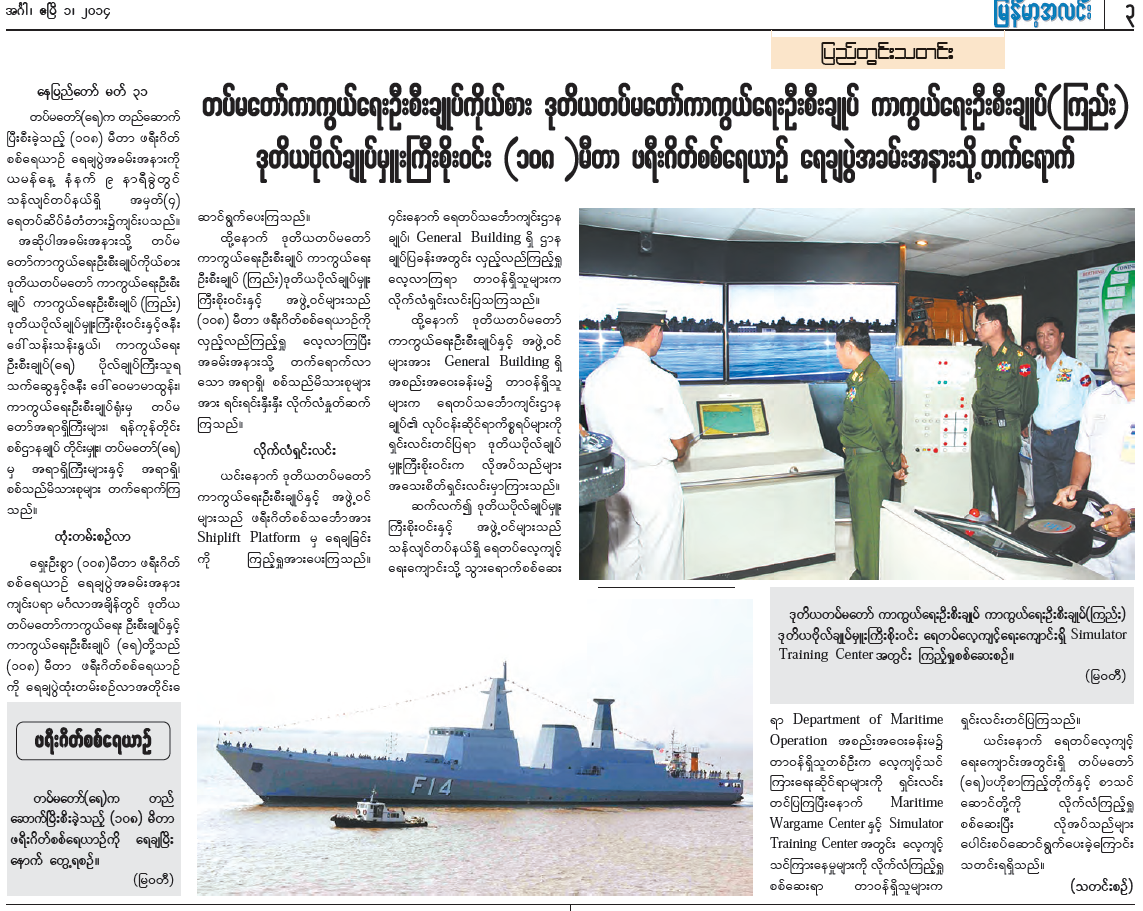 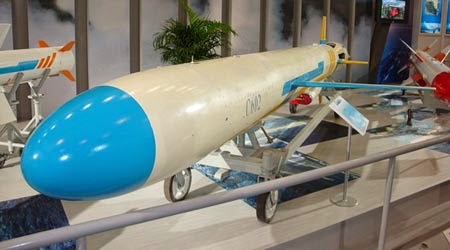 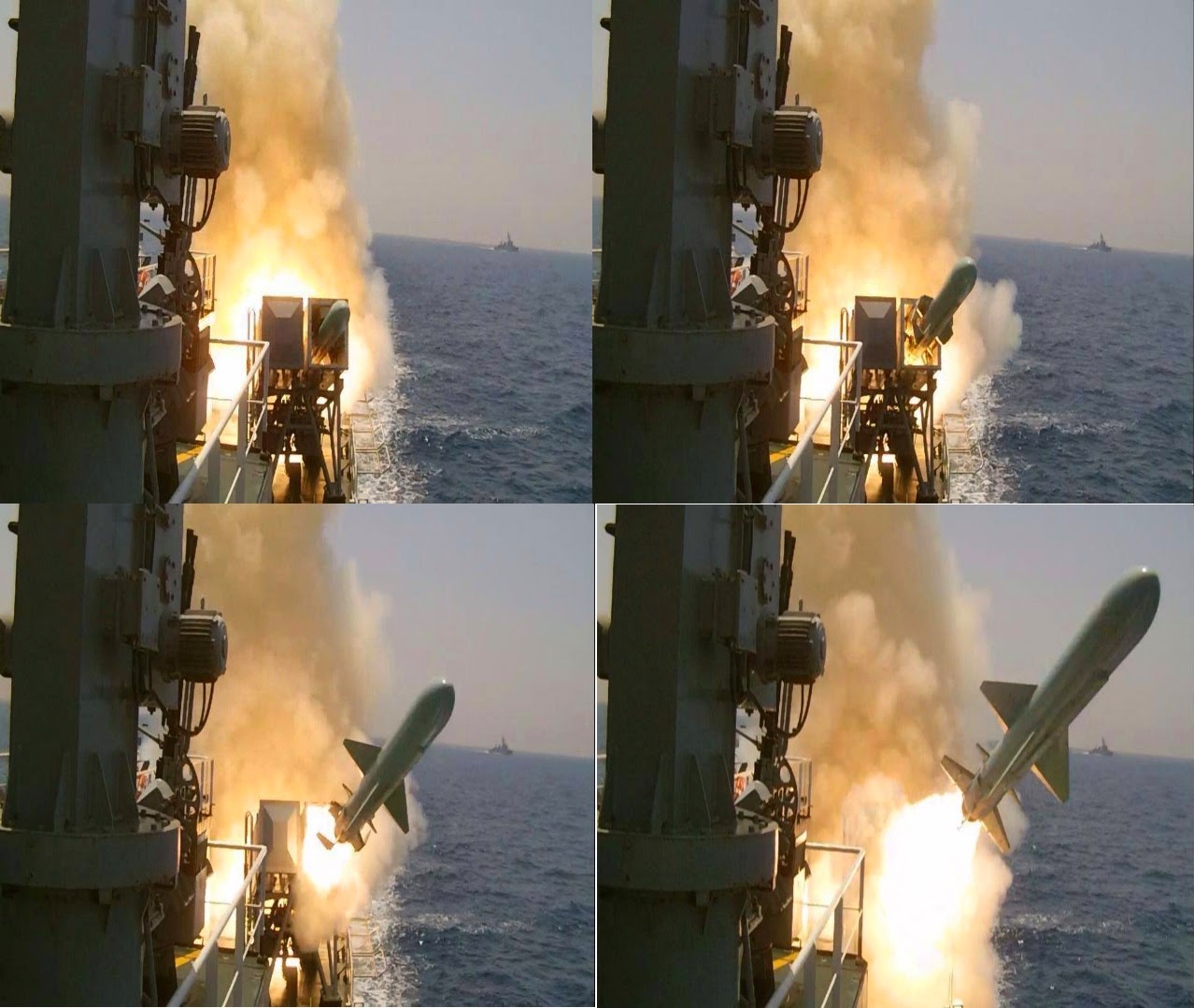 
F14 became the second Stealth frigate for the Myanmar Navy and used the same hull and propulsion as the preceding F12 frigate UMS Kyansitthar which was also built at Thilawa Naval Dockyards.

While the F12 used a mixture of Russian and Chinese systems, the F14 used predominantly Chinese systems, with a few sensors being notable exceptions. The F14 is designed for the fleet air defence role, and will be mounted with Type 346 radar and HQ-9 air defence missiles.

F14 UMS Sinphyushin will also carry C 602 anti-ship missiles which has the maximum range of 280 km. Aviation facilities included a rear hangar and flight deck for one Ka-28-A or Z-9 helicopter.

Burma is planning to build six figates of (108 meter) Aungzeya class and four (122 meter) modified-Aungzeya class at the Thilawa Naval Dockyards. Apart from these frigates Myanmar Navy is also operatng two light frigates F771 and F491. Following is the list of Burma Navy’s Frigates now in service and coming soon into service.


At an astonishing speed our Burma Navy has expanded from a fleet of ZERO frigates to NEARLY-NINE guided-missile frigates in just last four years. From zero anti-ship missiles to hundreds or even thousands ship-destroyer missiles. Absolutely incredible achievement to pull off by such a poor country like our Burma.


King Sin-phyu-shin or Hsinbyushin (12 September 1736 – 10 June 1776) was king of the Konbaung dynasty of Burma from 1763 to 1776. The second son of the dynasty founder Alaungpaya is best known for his wars with China and Siam, and is considered the most militaristic king of the dynasty.

His successful defense against four Chinese invasions preserved Burmese independence. His invasion of Siam (1765–1767) - nowadays Thailand -- and total destruction of Ayuhtayar City ended Siam's Ayuhtaya Dynasty. The near simultaneous victories over China and Siam has been referred to as testimony "to a truly astonishing elan unmatched since Bayinnaung." He also raised the Shwedagon Pagoda to its current height in April 1775.

The deputy commander-in-chief during his father's reunification campaigns (1752–1759), Hsinbyushin as king pursued an expansionist policy against his neighbors. By 1767, his armies had put down a rebellion in Manipur, captured the Laotian states, temporarily defeated Siam, and driven back two invasions by China.

But his reckless decision to wage two simultaneous wars against China and Siam nearly cost the kingdom its independence. The third Chinese invasion of 1767–1768 penetrated deep into central Burma, forcing Hsinbyushin to hastily withdraw his armies from Siam.

While the reinforced Burmese armies defeated the Chinese, and reached an uneasy truce in 1769, the Chinese threatened another invasion for another decade, and prevented Hsinbyushin from renewing the war with Siam.

The specter of war kept the state heavily militarized, setting the stage for army commanders to mistreat the population. In 1773, the army command provoked a rebellion by ethnic Mon troops, only to suppress the mutiny with "undue severity".

The warlord behavior by local governors and army commanders only increased in 1774 when Hsinbyushin suffered from what turned out to be a long illness that would ultimately claim his life. In 1775, periphery vassals states of Lan Na and Manipur both revolted. He died in June 1776 while the Burmese forces were still engaged in Siam and Manipur. The Burmese armies withdrew from Siam right after his death, leaving Lan Na in Siamese hands.


While most of his military victories were short-lived, the present-day Burmese control of Taninthayi Region, northern and eastern Shan State and Kachin State is an enduring result of his reign. 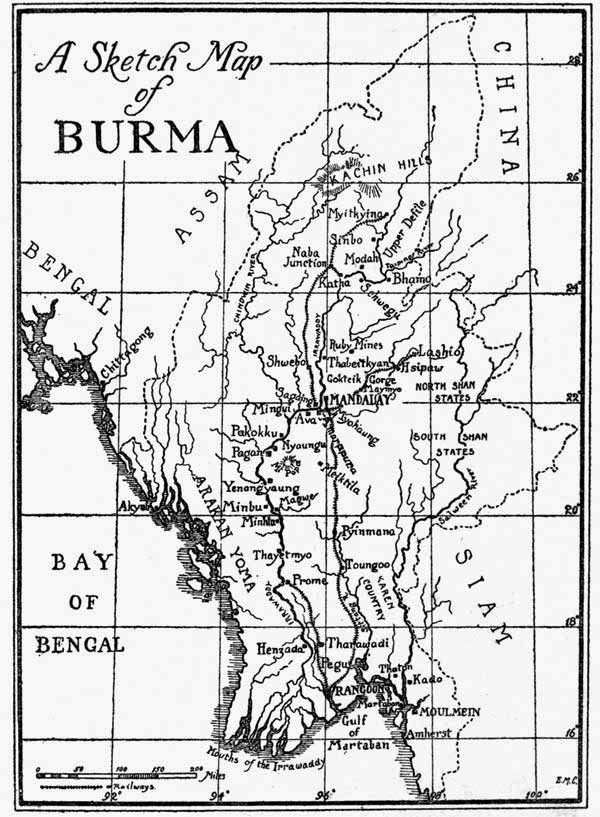 (Blogger's Notes: The way ever-stronger Burma military is rapidly building and expanding her naval fleet of guided-missile frigates with massive financial and technological supports from both Russia and China last few years has serious strategic implications on the global geopolitics as Burma controls an important part of Indian Ocean vital to the flow of crude oil to SE Asia and East Asia. 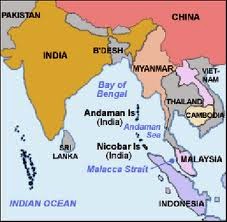 Burma Navy is able to build her many guided-missile frigates just because of technology transfer from Russia in the form of highly-advanced education -- to young Burmese Naval architects and ship-building engineers graduated out of Burma's DSTA (Defense Services Technological Academy) -- provided at Russia's leading engineering universities and the naval academy last 20 odd years.

IMHO both China and Russia are also generously providing Burma Navy with advanced weapon systems especially the sophisticated anti-ship guided-missiles worth hundreds of million of US$ almost free for reasons non other than Burma Navy to stand guard her waters as a proxy for their navies to balance the choke-holding power of mighty US Navy and Indian Navy in the Indian Ocean.

With Burma Navy now patrolling her blue-waters with a fleet of  powerful guided-missile frigates both US Navy and Indian Navy can no longer enter Burmese territorial waters willy nilly as they both used to do in just recent past. No wonder US President Obama is visiting Burma again in later this Fall!)