(Translation of news article direct from the OPPOSITE EYES MEDIA on 25 Apr 2014.)

Tens of thousands of Kachin Refugees fleeing from recent fightings between Burma army and KIA (Kachin Independence Army) into China are being pushed back by Chinese Border Security forces into Burma.

In recent past China had willingly accepted the Kachin refugees fleeing Burma into China and even provided with food and shelter and other humanitarian assistances. But this time was different as the obvious result of major drift between Chinese Government and KIO/KIA leadership.

“Before, our people used to run into China whenever the fighting started. But this time China’s closed the border and all the refugees are now stuck on the border. They are in trouble now as Chinese wouldn’t even feed them let alone providing them with shelters like they used to do,” said San Aung the go-between figure between the Army and KIA/KIO.


The violent clashes with the Army units started from KIA unilaterally breaking the cease-fire agreement and ambushing Burmese Army units escorting the Census Collectors in the KIA-controlled Mansi Township of Bamaw District by the China border.

More than 7,000 Kachin Christians being caught between two warring sides had so far taken refuge at both “Baptist Kachin Refugee Camp” and “AD-2000 Catholic Refugee Camp” inside Mansi Town.

But nearly 10,000 Kachin refugees mostly the sympathizers and supporters and families of KIA insurgents trying to enter China as they usually did in the past are now being trapped between advancing Burmese Army units and the blocking Chinese Army units on the border as Chinese did not let them into China.

“KIA’s Vice Chief-of-Staff General Gun Maw’s now being in US made Chinese really unhappy. Chinese are dead worried that US will eventually accept Gun Maw’s demand for US to get involved in the ongoing peace process between KIA and Burmese Army. Chinese always consider KIA as one of their lackeys in Burma.

Chinese believe what KIA is soliciting the political and material supports from the West especially the United States is basically KIA now abandoning China their long-time supporter. They always welcomed Kachin refugees in the past and not letting them into China this time clearly shows that Chinese are now seriously displeased by KIO/KIA leadership.

If clashes stop soon the refugee situation will be solved. If it’s not there will be serious refugee crisis on Chinese border. Not just the Kachin refugees Chinese could even stop providing KIA with weapons and essential supplies like food and medicine.


Right now, by tightly sealing the border China has already cut business and trade flows to KIA-controlled area like Laiza and other border posts,” explained Aung Kyaw Zaw the Burma-watcher and a former CPB leader on Chinese border. 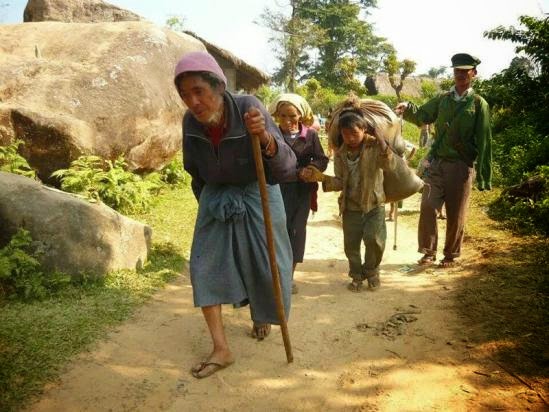