(News article and photos direct from the DAILY TELEGRAPH on April 4, 2014.)

Nathan Abela, president of Australian Defence League, an extremist anti-Islam group, was in his Gresytanes home last night when up to seven shot were fired into it. He escaped with minor injuries.

In yet another western Sydney shooting, the president of controversial anti-Islamic group ‘Australian Defence League’ became the victim of a targeted attack on his home last night. Nathan Abela, 24, said “up to seven” shots were fired into his Greystanes townhouse around 11.15pm in what police said they believed was a targeted attack.

He said a man walked to his door and asked if he had the right house before firing into his front door and windows, forcing him to duck for cover. The ADL are a right-wing extremist anti-Islam group who are very vocal in their opposition to the religion, regularly posting derogatory updates to their near 2,000 Facebook followers.


They have also held small scale protests in Sydney’s CBD protesting the religion’s presence in Australia. Mr Abela appeared on Ray Hadley’s 2GB show less than a week ago, with Mr Hadley describing him as a “liar” and a “grub” for secretly recording a conversation with his personal assistant and posting it on YouTube.

He regularly uploads videos to his YouTube channel, showing him phoning people to ask if they are ‘proud of being a Muslim’ or hands out anti-Islam flyers. Mr Abela said he was on the computer when he heard people knock on his door.

“When I heard the knocks I walked to the door knowing full well it wasn’t the police or anyone else, I could tell by their voice,” he said. “They said ‘Nathan, Nathan, is that you?’ and I said yes, and as soon as I said yes I knew I had to dive to the other side of the room. “

“That instant it was like bang, bang, bang, bang, I dove from one side of the room to the other, laid low to the ground, slid, and then got into position to defend myself and ready for whatever and that was it, they must have just fled.”

“I believe I tore every ligament in my shoulder because of the way I avoided getting shot. I wasn’t really thinking about the pain at the time. It happened very fast.”

On August-16 2008, would-be armed robber Kalid Dib a young Lebanese-Muslim man was shot dead by a security guard during an attempted robbery of an armoured van. Dib and another man were fired at when they tried to rob three Armaguard guards of cash at the National Australia Bank on George Street, Parramatta, on that Tuesday.


His two robber-mates took off with wounded Dib in their getaway Audi and later dumped dying Dib just outside the hospital in Auburn a seriously-troubled Muslim suburb in Inner-west Sydney. The 25-year-old died shortly after being discovered with a gunshot wound by Auburn Hospital staff at around 7pm.

As the dead Dib's family arrived at the hospital they were followed by a crowd of up to 100 young Lebanese-Muslim men who at one stage tried to storm the front door to prevent Dib’s body from taking away to Sydney Morgue for post mortem. Riot police were to be called in to disperse the violent group of Muslim thugs storming Auburn Hospital.

Next day after the hasty post-mortem Lebanese Muslims took away his body from Sydney Morgue to the Lakemba Mosque for immediate burial. Hundreds of defiant Muslim thugs showed up at the notorious Lakemba Mosque and later joined the funeral procession as a defiant show of Islamist force, the evil Muslims of Sydney.


In the early morning of June-7 2010 Gary Allibon and two armed security colleagues park their armoured van in a Sussex Street lay-by, just south of Market Street and alongside the Sydney’s Darling Park office towers where they are to make a routine delivery of cash. Allibon, 59, has been a security guard for the 11 years he has been a member of the Transport Workers Union.


As the guards alight from the armoured van a light-coloured European speedster - probably an Audi - is brought to a halt behind the armoured van. Four men - at least two with handguns - emerge in dark clothing and masks and demand access to the security van. Guns are pointed at the security guards. A weapon is fired and Allibon is hit at close range in the chest. Paramedics get Allibon to Royal Prince Alfred Hospital, where he dies soon after.


Police later revealed that Mr Allibon who had already been the victim of one armed robbery, handed over the cash, turned away from his attackers and walked towards the hotel. That should have been the end of it.

But inexplicably one of the thieves shot the 59-year-old guard in the back. He then walked over to the critically injured man, stole his pistol and left him for dead. Officers from Strike Force Lorimer released new surveillance footage of the gang's stolen silver Audi S8 and the robbery.


Police believe four bandits, wearing balaclavas and dark clothing, were in a stolen silver Audi that pulled up behind the guard's van about 5.50am on June 7, 2010. After the shooting, they sped away and were seen on Albion Street at Surry Hills, then on Flinders Street and finally travelling south on Anzac Parade. They later changed cars somewhere in the eastern suburbs and the stolen Audi was found burnt out in Deepwater Park at Milperra two nights later.) 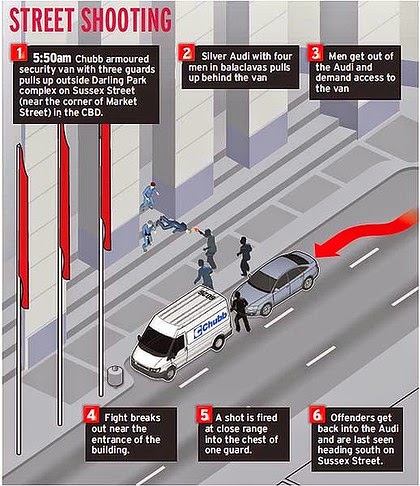 Related posts at following links:
The Scourge of Burma - Part 4 (Lebanese-Muslim Gangsters of Sydney)
Posted by Hla Oo at 11:03 AM