(Based on news articles direct from the Burmese and Kachin Blogs in April 2014.)

General Gun Maw the notorious rapist-warlord of so-called Kachin Independence Army (KIA) the bad-arse ethnic-insurgent mob in Burma is now in Washington D.C. after being invited by his US government backers. Funded generously by the US Government KIA General Gun Maw landed at the US capital on April-13 last Sunday.

His 12-days-long visit was sponsored by the US State Department and his four-member KIA team has plans to meet senior State Department officials and some members of US Congress who have blindly supported the thuggish KIA Christians in Kachins’ decades-long insurgency against Buddhist Burmese majority in our Burma.

Back in Burma Gun Maw has steadfastly refused to accept Burmese peace offers and also refused to let Burmese Government conduct Census collection in the border territories controlled by his KIA thugs.


His KIA terrorists had even tried to stop the 2014 Census in Kachin State by kidnapping and raping the census collectors the local female school teachers and attacking and killing their security escorts. Followings are just two cases of bad-arse KIA insurgents’ atrocities against people of Burma. 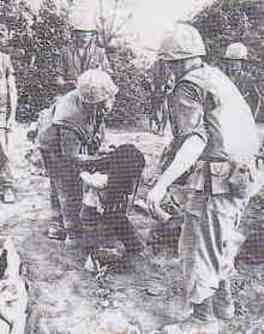 In the dark night of March-27 a four-member KIA unit entered the Aung Myay (3) village of Wai-maw Township in Kachin State for the specific purpose to kidnap and gang-rape a Lisu primary school teacher.

After entering the Lisu-Christian village they went up to Ward-5 house of young school teacher Ma Jar Bout who was sleeping with her sister and father inside the house. By exactly following the playbook of five-member US Army patrol depicted in the famous Hollywood movie “Casualties of War” they forced the pretty young teacher Ma Jar Bout to come along with them as a porter to carry their bags.


They then took her to an abandoned farm-hut about 3 miles away from the village and started beating her up as she refused to sexually-service them. Then for more than four hours all four KIA Kachin men brutally raped Ma Jar Bout till she lost her consciousness.

Only at next morning her father and villagers followed their track and found almost-dying Ma Jar Bout alone in the farm-hut. KIA men apparently had sadistically violated her genitals with not just their cocks but also with  various other instruments including bayonets and a sharpened-bamboo stick.

At the time of this report five days later Ma Jar Bout was still at the Wai-maw Hospital getting treatment for her serious vaginal injuries. One Kachin nurse there said the infection was serious and spreading fast and threatening her young life.

KIA has been seriously disrupting the process of Census collection in all over Kachin State and in the Mansi Township they went further by attacking the Burmese Army units escorting the census collecting teams.

Despite their formal agreement direct with Burmese President Thei Sein to let the Census collectors into their so-called KIA-controlled territories like Mansi region they still refused to cooperate and even threatened to attack the civilian census collectors. They ordered all the village-administrators in Mansi area not to let Census teams into their villages and to inform the KIA once the army-escorted Census teams arrived at their villages.

And believe it or not the bastard KIA has already signed the peace agreement with Burmese army just last year’s January when storming army units were right at the gates of their last stronghold Laiza on the China border and ready and willing to smash KIA into oblivion forever.
Burma Army Punishing Recalcitrant KIA in Mansi Township

As the retaliation for all those KIA atrocities Burma Army's elite Light Infantry Division LID-88 headquartered in Magway sent in its three infantry battalions including the Poppa-based Infantry Battalion IB-78 to Mansi Township last week. Eight mobile columns of LID-88’s battalions then began to attack Kachin insurgents from Mansi-based KIA Battalion-27 under KIA Third Brigade in the early morning of April-10.

Then in the late evening of April-10 more than a thousand troops mainly from LID-88's IB-78 stormed the KIA Battalion-27’s Ulampar HQ and forced the KIA insurgents to flee in disarray. The abandoned camp was then burned down to the ground by the Burmese troops.

Heavy weapons were used by both sides and the result is the fleeing of more than 2,000 from the nearby Kachin villages into neighboring China and some to international NGOs’ IDP camp at Lagartyan.

After five days of heavy fighting since April-10 all KIA positions in Mansi Township are now totally wiped out by the Burmese Army units and the Kachin insurgents are now taking their desperate refuge in the remote areas controlled by KIA Fourth Brigade in neighbouring Northern Shan State.


Meanwhile KIA Vice-Chief-of-Staff General Gun Maw is in faraway Washington D.C. in the US planning to report the current situation in Kachin Land to his supporters at a secret discussion meeting held on April-16 Wednesday at John Hopkins University’s Centre for Strategic and International Studies (CSIS) at its Washington D.C. Campus. 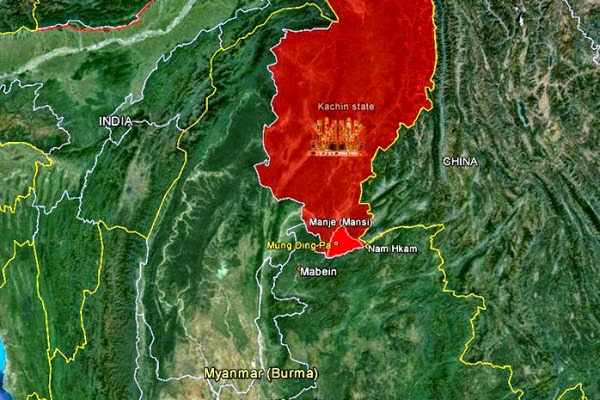 KIA Vice Chief-of-Staff General Gun Maw also is notorious for his sexual prowess among KIA’s so-called women warriors. Like late Moama Kaddafi of Libya our General Gun Maw has a troop of women bodyguards all pretty Shan girls plucked out from the Shan villages in KIA-controlled territory.

She was originally from the Sitarpu Ward in Myitkyinar and her family still live there. Her colleagues and friends including her boyfriend a young Kachin officer in the KIA didn’t like what happened to her, but they didn’t dare to say or do anything as they were all dead scared of Gun Maw and his Kachin thugs.
Related posts at following links:
KIA: The Highway Robbers and Rapist Cowards
KIA Chief Gam Shaung Wounded By a Burmese Helicopter Gunship
Posted by Hla Oo at 10:29 AM