Ko Ko Gyi (53) is well known in Burma as a former student leader during that failed 8-8-88 (Four-Shit) Uprising and one of the leaders of George Soros’ lackey “Open Society Myanmar” a loosely-formed leftwing-Socialist political grouping in Burma now known as Myanmar.

He had been jailed a very long time for his rebellious political activities by General Than Shwe’s  military government and he was released from Insein Prison in 2011 when President Thein Sein’s pseudo-civilian government took control of newly semi-democratic Burma.


Just recently the 53-year-old Ko Ko Gyi has abandoned his long-time girlfriend who has been at his side all those years of political struggle and extreme-hardship and abruptly married a young woman Khin Thu Thu Win the daughter of late Dr. Thein Win the 1990-elected MP for Kalay Town.

Compared to Min Ko Naing the “Open Society Myanmar” leader, Ko Ko Gyi is known to be politically sharper. Being a pure Buddhist-Burmese compared to half-Chinese Min Ko Naing is also a political advantage in basically still-stone-aged Burma where Buddhist-nationalism is mainstream political ideology of the majority.

But right now there is a serious ideological and political fight going on between these two so-called popular student leaders Min Kon Naing and Ko Ko Gyi. Min Ko Naing is known to have favoured to join NLD en-masse while Ko Ko Gyi has been openly saying for his 88-Generationers to stand alone as a separate political party.

Obvious result is that while NLD’s Aung San Suu Kyi has been actively trying to bring all those 88-Generationers into her fold, the main business circle in Burma the so-called Cronies or Oligarchs (unofficially led by truly-corrupt ex-General Shwe Mann the Parliament Speaker and his billionaire businessman son Toe Naing Mann and another billionaire Crony Shwe-Than-Lwin's Kyaw Win) are quietly supporting Ko Ko Gyi with massive funds and other assistances from behind the scene.

The obvious outcome is two extremely lavish wedding receptions (first one at Kalay and second one at Rangoon) for our lucky bride Khin Thu Thu Win (very young at 27) and famous groom Ko Ko Gyi (very old for Burmese standard at 53) and enormous amount of political Bribe (sorry, wedding presents) finally amounting to more than 100 million US Dollars. Who said our Burma is a very poor country? IMF and the World Bank please analyze us again!

Like many other poor developing countries our poor Burma also has developed a very elaborate system of delivering political bribes to the ruling class and influential politicians as expensive wedding gifts at their and their children’s lavish weddings.

Former Senior-General Than Shwe did it in the 2006 wedding of one of his daughters and the lucky couple received more than 50 million US$ worth of presents from the crony businessmen and the official wedding video that night dubbed “The Diamond-lined-Night (Sein-si-de-nya in Burmese)” went viral on You tube.

But Ko Ko Gyi did outdo even the very powerful military dictator by pulling in more than 100 million US$ worth of wedding presents from the Cronies at his not one but two lavish weddings. He wasn’t even ruling our Burma yet. What the fuck is going on in our strange Burma now known as Myanmar. I really hate that bloody name Myanmar which literally means MONGREL DOG in Thai.

The bride and groom signed their wedding papers on March-5 at the divisional courthouse in Rangoon and their first lavish wedding reception was held at the bride’s native town of Kalay in Middle Burma on March 21. Their second lavish wedding was held on April 6 in Rangoon.

88-Generationers’ “Open Society Myanmar” has been flushed with generous funds from George Soros’s “Open Society Foundation” and other Socialist supporters from Western Democracies and some of the money was allocated as advance cash for their leader Ko Ko Gyi’s two lavish weddings. 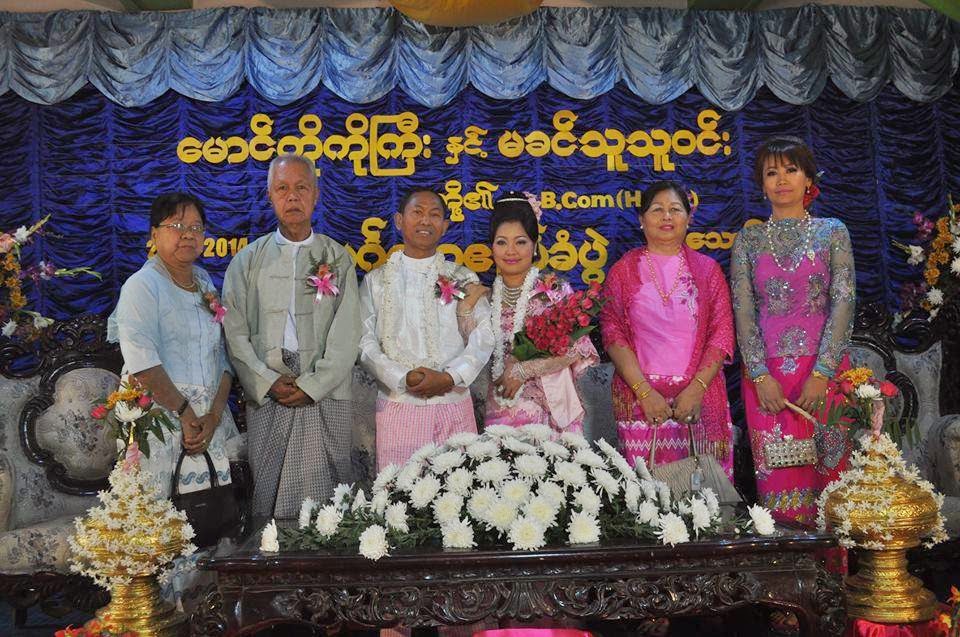 This was what Aung Lin the unofficial treasurer of “Open Society Myanmar” said of the financing deal for their Dear Leader’s lavish weddings.

“Sayar (Master) Ko Ko Gyi has already taken out 200 million kyats (about US$ 200,000) advance as expenses for transportation, preparation, catering, wedding dresses, accommodation, dowry, and honeymoon for his wedding reception in Kalay.”

Aung Lin added that his Dear leader had plans to take out another 200 million kyats (another US$ 200,000) for his April-6 wedding reception in Rangoon. He then speculated that all the cash Ko Ko Gyi had taken out of their political funds would eventually be returned to the “Open Society Myanmar” as Ko Ko Gyi was expecting to receive substantial amount of cash as wedding presents from both Kalay and Rangoon receptions.

While some of 88-Generationers are supportive of Ko Ko Gyi actions “saying that as long as he is returning the cash it is Okay” some are already criticising their Dear Leader for misusing the so-called political funds collected from the foreign donors like George Soros and domestic supporters.

From their recent fund raising alone at the 25th Anniversary of 8-8-88 Uprising on 8-August-2013 the 88-Generationers collected more than 400 million kyats from the public. But the US$ 250,000 reportedly collected from George Soros’ “Open Society Foundation” was still unaccounted for.

NLD’s Wai Phyo Thaw recently said that, “Frankly, in my opinion Ko Ko Gyi and Min Ko Naing are just exploiting politics for their self-interests. When George Soros came and reportedly gave them US$ 250,000 Ko Ko Gyi took it all for himself and that misappropriation has been still creating so much friction among them since.”

The Cronies are also chasing their tails and greatly taking care of them. Sky Net’s Shwe Than Lwin Group paid 588 million kyats (about US$ 588,000) for that lousy guitar with Min Ko Naing’s sketch on it. Shwe Than Lwin Group also paid to feed more than 5,000 followers of 88-Generationers for three continuous days during 8-8-88 Uprising 25th anniversary celebrations just last year.

Now comes Ko Ko Gyi’s wedding reception in Kalay? Then again at Shwe Than Lwin’s own Sky Star Hotel in Yangon. Ordinary people are having trouble to get  two regular meals a day let alone getting two lavish wedding receptions.

What I would like to ask the Dear Leader Ko Ko GYi is from where he gets 500 million kyats reportedly spent on his two lavish wedding receptions?”
Gifts worth 100 Million Dollars from His Second Lavish Wedding?

88-Generationers’ “Open Society Myanmar” sources declared that the lavish wedding receptions for their Dear Leader Ko Ko Gyi has generated a handsome profit of 1.738 billion kyats (about US$ 1.738 million) in hard-cold cash alone as wedding-gifts despite costing them more than 500 million kyats (about US$ 500,000).

Tin Myo Zaw another former student leader from 8-8-88 Uprising also said, “The wedding receptions were really great. It shows that not just the army-generals’ children and their Business-Cronies’ children a poor student-politician like our Ko Ko Gyi well loved by people could have great wedding receptions in this country. Not just Ahmay Suu (ASSK) but also British Ambassador, famous politicians, people from international community, government ministers, and even Max-myanmar Zaw Zaw and other rich businessmen attended Rangoon reception.”

According to reliable insiders from the “Open Society Myanmar” so many wedding presents were received at the receptions and cash alone was more than 1.738 billion kyats. Also there were large amount of UU$ and EURO received from Rangoon-based foreign missions and INGOs.


In addition to official wedding gifts worth close to US$ 2 million at his two wedding receptions many luxury cars and apartments and houses and expensive jewelleries and secret cash-gifts all together close to US$ 100 million worth were reported to have received by 88-Generationers “Open Society Myanmar” leader Ko Ko Gyi the rising politician in desperately poor Burma where average worker earns about two dollars US a day.