New York Police Commissioner James O'Neill identified the suspect as Akayed Ullah, 27, a Bangladeshi Muslim immigrant, who sustained injuries from the blast and was in police custody. Several people near the blast suffered minor injuries.

New York Mayor Bill de Blasio said the incident was an attempted terror attack. "Thank God the perpetrator did not achieve his ultimate goals," de Blasio said. The suspect has been interviewed by investigators, and CBS News has learned that he claimed he carried out the attack for the Islamic State of Iraq and Syria (ISIS) and was inspired by the group.


CBS News has also learned that authorities are investigating whether he may have been in contact with known extremist individuals. Investigators are trying to determine if anyone may have assisted him in the plot.

The blast took place in a passageway underneath 42nd Street in Manhattan that connects the subway stations at Times Square and the Port Authority Bus Terminal, which is packed with commuters during the morning rush.

O'Neill said the suspect was heading toward the Times Square subway station when the device detonated at approximately 7:20 a.m. The suspect also had another device on him, sources tell CBS News.

A photo confirmed by CBS News showed a bearded man crumpled on the ground with his shirt apparently blown off and black soot covering his bare midriff. A police officer is holding the man's hands behind his back. 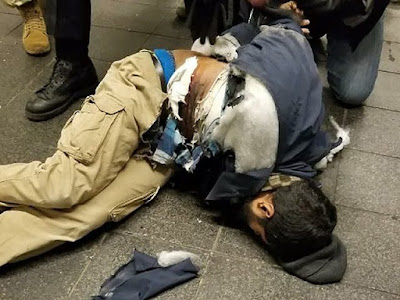 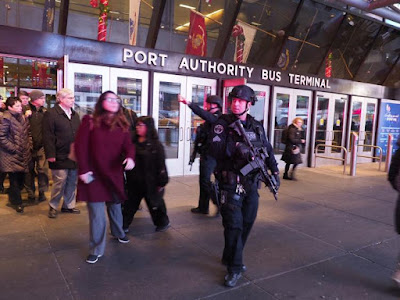 Another law enforcement source tells CBS News' Jeff Pegues that four Port Authority Police officers apprehended the suspect. When they encountered him, there was smoke around him and debris all over the floor. CBS News has learned that Ullah sustained a shrapnel wound. He was taken to a Manhattan hospital.

The source also says as police approached the suspect appeared to be reaching for a cellphone and he had wires protruding from his jacket and his pants. The four officers identified as making the arrest range in age from 26 to 45 years old. Three of them served in the military, with one of them being a bomb technician, Pegues reports.

O'Neill initially said three other people in the immediate area of the blast were also injured. Fire Commissioner Daniel Nigro said they suffered minor injuries consistent with being in the area of an explosion such as ringing in the ears and headaches. They transported themselves to area hospitals.

Later in the day, Mount Sinai Health System said it had received and treated 5 patients with minor injuries, according to a statement. All were in stable condition. Mount Sinai says it is working with law enforcement officials.

CBS News has learned that the suspect was from Bangladesh. Ullah legally entered the U.S. in February 2011 on a family immigrant visa with his parents and eventually became a legal permanent resident. He has no criminal record.

A law enforcement source told CBS News that indications are Ullah had traveled overseas, including an apparent trip to Bangladesh in Sept. 2017, returning to the U.S. in Oct. 2017. He also had previous travel to the United Arab Emirates.

Deputy Police Commissioner John Miller said that the device was based on a pipe bomb and was affixed to the suspect's body with a combination of Velcro and zip ties. White House press secretary Sarah Sanders said that President Trump had been briefed on the incident.

At Monday's White House briefing, Sanders praised the "brave first responders and others who rushed to the scene," calling them "heroes." She also turned to the issue of immigration. "We must ensure that individuals entering our country are not coming to do harm to our people and we must move to a merit based system of immigration," Sanders said. She said the U.S. must eliminate ISIS and the "evil ideology" behind it.

In a statement released by the White House, President Trump said, "Today's attempted mass murder attack in New York City -- the second terror attack in New York in the last two months -- once again highlights the urgent need for Congress to enact legislative reforms to protect the American people."

The president criticized the "lax immigration system" and said that those convicted of engaging in terrorism "deserve the strongest penalty allowed by law, including the death penalty in appropriate cases."

Across town at U.N. headquarters, the secretary-general's office has been monitoring the situation and speaking with the police, CBS News' Pamela Falk reports. 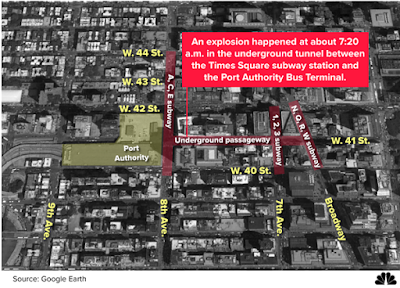 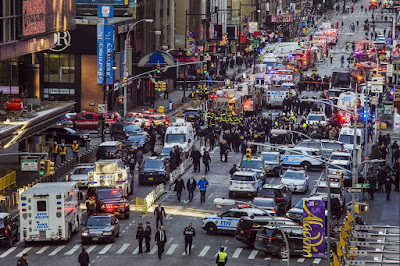 On Monday 27-year-old Akayed Ullah, a Bangladesh national, injured three individuals when he allegedly tried to detonate a suicide bomb in New York City in a planned terrorist attack. Ullah, as confirmed by the Department of Homeland Security (DHS), entered the U.S. in 2011 as a chain migrant.

He was admitted to the United States after presenting a passport displaying an F43 family immigrant visa in 2011. The suspect is a Lawful Permanent Resident from Bangladesh who benefited from extended family chain migration. Trump has repeatedly demanded an end to chain migration, saying “Chain migration is a disaster for this country and it’s horrible.”

More than 140,000 Bangladeshi nationals — larger than the population of Dayton, Ohio — have entered the United States since 2005 for no other reason than to reunite with extended family members, newly released data reveals.

Previously unreleased Department of Homeland Security (DHS) information shows the large-scale mass immigration that has occurred where foreign relatives can enter the U.S. simply because their family member is an immigrant. This process is known as “chain migration.” Since 2005, the U.S. has admitted and resettled 141,501 Bangladeshi nationals who entered because their foreign relatives were already living in the country.

A chart released to Breitbart News reveals the increasing flow of foreign nationals under the process of chain migration, where on average every two new immigrants bring seven foreign relatives with them to the U.S.

The scale to which the U.S. has mass immigrated Bangladeshi nationals was revealed after 27-year-old Akayed Ullah, a Bangladesh national, allegedly attempted to detonate a suicide bomb in New York City, New York on Monday, injuring at least three individuals.

Ullah reportedly entered the U.S. seven years ago in 2010. It remains unclear if the suspected Islamic State-inspired terrorist entered as a chain migrant with family ties.

Another suspected ISIS-inspired New York City terrorist, Uzbek national 29-year-old Sayfullo Saipov who is accused of murdering at least eight individuals, entered the U.S. in 2010 by winning one of the 50,000 visas randomly allotted every year under the Diversity Visa Lottery.

The Visa Lottery dolls out 50,000 visas annually to foreign nationals from a multitude of countries. The countries include those with terrorist problems, including Afghanistan, Algeria, Egypt, Iraq, Lebanon, Libya, Nigeria, Saudi Arabia, Somalia, Syria, Trinidad and Tobago, Venezuela, Yemen, and Uzbekistan.

About 9.3 million foreign nationals have come to the U.S. as chain migrants between 2005 and 2016, Breitbart News reported. In that same time period, a total of 13.06 million foreign nationals have entered the U.S. through the legal immigration system, as every seven out of 10 new arrivals come to the country for nothing other than family reunification.

This makes chain migration the largest driver of immigration to the U.S. — making up more than 70 percent — with every two new arrivals bringing seven foreign relatives with them.
Currently, only one in 15 foreign nationals admitted to the U.S. come to the country based on skills and employment purposes. Though roughly 150,000 employment-based Green Cards are allotted every year, half of those Green Cards actually go to the foreign relatives of employees.


Since 2005, the U.S. admitted 80,252 chain migrants from Iran, despite the nation being listed by the U.S. State Department as a sponsor of terrorism. President Trump has called for ending both chain migration and the Diversity Visa Lottery.