(A blog post from The DECONSTRUCTING LEFTISM on 24 October 2013.) 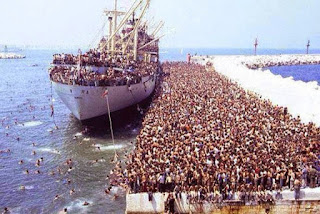 Paul Kersey recently had a post on why Dayton was looking for Hispanics to move in. Foseti reviews a book on the economics of immigration. People seem to be moving about a lot in the modern world, but why?

As I have said before, capitalism demands cheap labor. Mass movement of populations has been a feature of progressive capitalism since its invention at the advent of global trade. The New World tropics provided an excellent environment for growing sugar cane, making cheap sugar- a highly desirable product- available to be sold in Europe.

But growing sugar cane was a highly labor intensive process, so huge number of Africans were forcibly moved to South America and the Caribbean. (Without knowing the actual numbers, I suspect the economic significance of slavery to sugar far outweighs its significance to cotton.) Cotton of course was another highly desired industrial commodity, becoming more significant with the advent of the cotton gin and then the steam loom.

Northern European overpopulation provided a push as well as a pull factor, and steam power for riverboats and then railroads made trade, and thus the profitable population, of the North American interior on a large scale possible. Steam power also made mining and manufacturing on a large scale possible. In Europe this occurred with farm to city movement, but some of the obsolete farmers moved to North America.


The trouble with moving large numbers of people around is that it has consequences that are regarded as undesirable as well as desirable to the people in power. The sugar plantations of the Caribbean made some British colonists very rich, and the merchant class in England didn’t care for this, particularly since they tended to be the wrong kind of people.

The slave trade (eventually) was ended, and while it may seem like a noble gesture, the slaves were isolated on islands and weren’t going anywhere, so the sugar business for good Methodist and Quaker businessmen in England wasn’t really affected.

Slavery in the US had fewer barriers. Concentrated in the Southeast, much of the rest of the continent appeared to be ripe for development with slave labor, if only the legal and political problems could be resolved. The South controlled and had controlled the Supreme Court of the US for 60 years or more, so when they weren’t resolved by democratic methods they were resolved by judicial fiat, in the old American tradition.

Unfortunately the Southern slave owners were also the wrong kind of people, and many whites who couldn’t care less about blacks wanted to farm in the West without competition from plantation operators, so Dred Scott and Lemmon v. New York were overridden by the Civil War.

Blacks remained confined to the South (even after the Civil War) as agricultural labor for some time, but northern factory owners found the Europeans recruited to work in their factories restive, so they started to bring blacks north. Later they found that it was easier to move the factories to a cooperative population than bring a cooperative population to the factories, and so many manufacturing operations moved south, but that is another story.

The immigration story of the last 50 years does not occur in a vacuum, but is in the centuries old tradition of moving people to where they are desired, to create a new industry or replace a restive population. Moving blacks north broke the political power of working class Europeans, but blacks are not a satisfactory or useful population except in the political sense.


Once blacks had political power, they became completely useless as workers. The solution- and this was quite open in the 1980’s, although muted since- was that Latin American immigrants would replace blacks in menial jobs.

Working class whites were quite happy to see blacks get the heave-ho, and even blacks didn’t mind, since all the blacks who counted had government or affirmative action jobs, and the lower class ones didn’t want to be janitors anyway. Later whites got replaced by Hispanics, and government jobs more and more require Spanish, so those who didn’t mind are ruing the day.

Population movements of this kind are really a “policy” in terms of something government officials or academics think up, they are just what businessmen want at the time. In that sense Collier’s analysis misses the point.

And the formal recruitment of Hispanics into Dayton is a little unusual in the sense it is so open, but a city with a heavily black population is useless to businessmen, so bringing in a population that has a good balance of docility and productivity is the right move.

The argument in America is most people come from someplace else - as part of some earlier capitalist generated population movement - so no one is in any position to object. But just because some cynical thing was done in the past for the benefit of a few, doesn’t mean it is OK now.

People who have been moved or induced to move in the past are captives of their place of birth, and their only defense against replacement is preventing new workers coming in. The answer to these movements isn’t any kind of economic analysis but “No”.


(Blogger’s notes: “Population Movement is just a Business Necessity!” In late 1980s Australia relaxed immigration restrictions and issued a list of desirable qualifications for prospective migrants – skill shortage really – and I reaped the benefit. The list was said to have been based on the demands of Australian Business Council. My profession Mechanical/Production Engineer was in that list and when I applied for PR visa I got it in just – unbelievably short - 3 weeks instead of a year or more the process normally takes.) 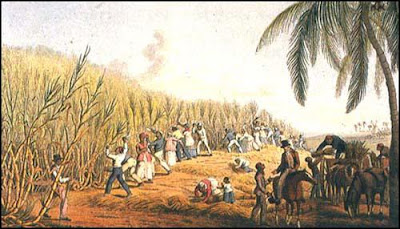