(Lawrence Franklin’s article from The GATESTONE INSTITUTE on 01 December 2017.)

Pope's High-Risk Visit to South Asia: Opposition in Catholic Hierarchy: The Pope's trip to Myanmar (Burma) and Bangladesh is occurring against a backdrop of political turmoil and criticism by some Vatican watchers. The visit may also present personal danger for the Holy Father.

Although no one, of course, condones violence and mass expulsion, there has been been indignation, expressed by the spokesperson for Myanmar's Bishop Conference, as to the Pope's concern for the human rights of Muslims while failing to comment on the regime's persecution of Christian minorities in Myanmar. Although the Pope's schedule is filled with pastoral events with the Catholic faithful, the international media appears to be focusing on Myanmar's volatile religious and ethnic issues.

Pope Francis's visit has been opposed by some in the country's Buddhist majority, in light of the Pontiff's August 27 comments in St. Peter's Square: "Sad news has reached us of the persecution of our Rohingya brothers and sisters, a religious minority. I would like to express my full closeness to them – and let all of us ask the Lord to save them, and to raise up men and women of good will to help them, who shall give them their full rights."


Myanmar's only Catholic cardinal, Charles Maung Bo and others were successful in persuading Francis not to use the term "Rohingya," a government-proscribed term referencing the country's Muslims, during his visit.

Beforehand, the prominent American Jesuit journalist Fr. Thomas Reese worried that the Pope would risk compromising his moral authority by refraining from directly discussing the Rohingya plight but cautioned that defending the Rohingya would lead to increased persecution of the Christians there.

Others, such as the Bangladesh-born Ali Riaz, Illinois State University Professor of Political Science, commented that "Bangladeshi (Muslims) expect the Pope to "speak very clearly and loudly" in support of the Rohingya."

Father Mariano Soe Naing, Spokesman for Myanmar's Bishop Conference, also stated: "If we had to take the Holy Father to the people who suffer most among us, we would take him to the refugee camps of the Kachin [a predominantly Catholic group], where many victims of the civil war have been displaced from their homes."

Other Christian minorities, including the Chin in northern Myanmar and the Karen in the eastern part of the country, also face Muslim oppression. The Catholic Bishop Raymond Sumlut Gam of Myanmar's Bhamo Diocese suggested that the Pope is misinformed about the nuances of the Rohingya issue: "We are afraid that the pope does not have sufficiently accurate information, and is releasing statements that do not reflect reality."

Myanmar's government is under intense international scrutiny concerning the Burmese military's assaults against the Rohingya, which has already driven hundreds of thousands of them across the border to Bangladesh. Any public sympathy which the Pope may express concerning the Rohingya will invite criticism by the majority of Myanmar's population who genuinely fear Islamist movement into their country.

Myanmar's government and people have legitimate cause for concern regarding Islamist extremism. After all, the army's assault on the Rohingya of northern Rakhine was precipitated by Muslim attacks on local police stations. 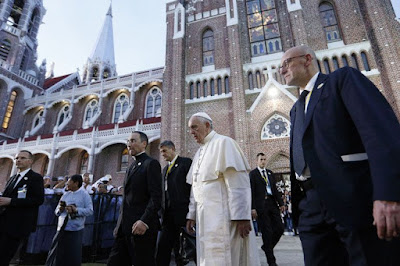 Moreover, members of the Arakan Rohingya Salvation Army (ARSA) are receiving military training from Islamic terrorist groups in Pakistan and Bangladesh. The Rohingya diaspora in Saudi Arabia also appears to be coordinating Myanmar-based militants with Pakistani terrorist groups such as like the Lashkar-e-Taiba.

Experts, including David Steinberg, a specialist on Myanmar at Georgetown University, suggests that the Pope's public remarks reflect the similarity of Buddhist and Christian emphasis on compassion and "loving kindness."

That approach, however, may dampen any potential plans to stage public protests by those Buddhist clerics who are suspicious of non-Buddhists in the country. Those themes, however, will likely be received well by the State Sangha Maha Nayaka Committee, Myanmar's organization overseeing Buddhist clerics.

Pope Francis's next stop, in Bangladesh, from November 30 to December 2, will probably include a stop in one of the Rohingya refugee camps, which include ARSA Islamic militants who mixed in with the flow of refugees from Myanmar. Jihadists in the camps might be inspired to start carrying out recent Islamic State directives to start attacking the Vatican. A recent Islamic State website featured a drawing of a decapitated pope.

No stranger to Islamist violence in Bangladesh, Prime Minister Sheikha Hasina's pro-western administration is likely to maintain tight security during the Pope's visit. Even if Islamic extremists in Bangladesh do not mar the visit of the Pope, there needs to be pressure in the Vatican hierarchy for him to adopt a more realistic view of the objectives of radical Islam.

(Dr. Lawrence A. Franklin was the Iran Desk Officer for Secretary of Defense Rumsfeld. He also served on active duty with the U.S. Army and as a Colonel in the Air Force Reserve, where he was a Military Attaché at the U.S. Embassy in Israel.)

VATICAN CITY (ChurchMilitant.com) - A pro-ISIS group released a chilling poster depicting a masked jihadist with a "beheaded" Pope Francis. It comes only days after jihadist supporters vowed to launch a Christmas attack on the Vatican.

In the photo, a jihadist is shown standing over the orange-jumpsuited body of a prisoner, clutching the decapitated head of Pope Francis. The terrorist is dressed in khaki with a white scarf over his face and a knife in one hand, while the background shows several damaged buildings. Next to the severed head is the pope's name, Jorge Mario Bergoglio.

Posters do not usually warn of an imminent threat, but nevertheless are a call to action for lone wolf attackers who may be waiting to strike. Analysts warned previously of an increase in ISIS attacks worldwide following the collapse of the Caliphate in the Middle East. Terrorists use such attacks to arouse fear and leave a mark, particularly when it seems their power is diminishing.

It's not surprising to see threats like this against Pope Francis and Christianity, especially during the holiday season. ISIS and its supporters know how to play the media game, and often time the releases of their threats to get the highest amount of attention as possible. 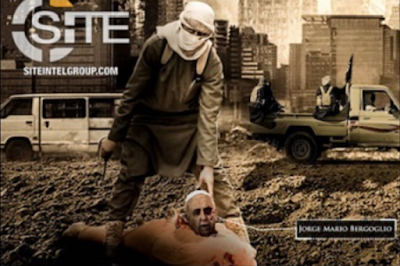 Pope Francis met in September with Dr. Muhammad bin Abdul Karim Al-Issa, the secretary general of the Muslim World League (MWL), a group linked to financing jihad terror. During the meeting, Al-Issa thanked the Pope for his "fair positions" on what he called the "false claims that link extremism and violence to Islam."

This is not the first time a Muslim leader has thanked the Pope. Ahmed al-Tayeb, the Grand Imam of Cairo's al-Azhar, thanked Francis for his "defense of Islam against the accusation of violence and terrorism."

This peaceful Catholic-Muslim exchange came after a five-year lull, when Cairo-based Al-Azhar discontinued talks after comments by then-Pope Benedict XVI in 2011 regarding a jihad terrorist who murdered 23 Christians in a church in Alexandria, Egypt. Benedict denounced "terrorism" and the "strategy of violence" against Christians, urging for the protection of Christians in the Middle East.

In September 2013, Al-Azhar annnounced that Pope Francis declared his respect for Islam and his desire to achieve "mutual understanding between the world's Christians and Muslims in order to build peace and justice."

But Al-Tayeb has proven himself to be anything but a preacher of peace, cooperation and mercy, condoning anti-Semitism on Qur'anic ground and arguing for Islamic state murderers of the Jordanian pilot to be crucified and have their hands and feed amputated.

Pope Francis is considered the most "pro-Islamic, subdued Pope in modern history," with evidence that consent and compromise to Islam is seen as a weakness, allowing for more demands, conquest and attacks in the name of Islam.


Christmas has shown to be a popular time for ISIS attacks in the past; Anis Amri drove a truck into a Berlin festival market on December 15, 2016, and Rizwan Farook terrorized a work Christmas party in San Bernardino, California before going on a rampage with his wife Tashfeen Malik in 2015.
Posted by Hla Oo at 6:21 AM