(Direct translation of a daughter’s plea letter to Myanmar Human Rights Commission for the brutal executions of her Shan parents by the KIA Fifth brigade in September 2011. Daw Waing Tin's 56 year-old father and 55 year-old mother both Shans were kidnapped and tortured and murdered brutally by the Kachin insurgents of KIA battalion-24 Fifth KIA brigade in Bamaw District of Kachin State.)

Subject: A daughter’s plea to punish the KIA men who murdered my parents.

I, Daw Waing Tin, the holder of National Registration Card No. 1/ma-ma-na(naing)- 020140, would like to report the murders of my parents to your esteemed commission. My parents were U Kyaw Swe and Daw Yar who were brutally murdered by the so-called Kachin Independence Army (KIA).

I’d been living with my parents in the Tain-ma-kyaing village of Daw-phone-yang sub-township in Bamaw district, and we were earning our honest living by farming and also having a small grocery shop in our village. About a year ago both my parents were taken away by the KIA and just last month we learned the fact from the escapees from KIA that both my parents were brutally killed by the KIA soon after they were kidnapped.

We had been angry and extremely upset since the day we knew the true story of what happened to our parents. If we ever had a chance we felt like we could kill and eat the raw flesh of KIA men who killed our parents and the KIA leaders responsible for ordering the kidnappings and tortures and killings of our parents in Kachin State.

With deep respect and strong confidence that your commission will investigate and do whatever necessary to punish the KIA men and leaders responsible for the murders of our parents I had written this letter to you.

We have five siblings, but I am the only one living with our parents while the rest were living in Shwe-kyay-nar ward of Bamaw town. At the time of their murders my father was 56 and my mother 55.

Majority of people in our area are Shans and there are some Kachins and Burmese and other ethnic nationality races living peacefully together. Most people here work as farmers and many have banana farms after the banana companies have been doing business in the area.

Since June 2011 KIA insurgents have been committing so many atrocious disturbances adversely affecting the village people from our area. On 20 August 2011, a so-called second-lieutenant named Brang-naung and about 20 men from KIA Battalion-24 of KIA Fifth Brigade  arrived at Shan-thein-sint village on the Moe-ne Stream to collect hefty protection money (Set-kyay) from the commercial boats operating along the stream.

On one motorised-boat they found and later confiscated 20 bags of rice ordered by my father for our village. By using this as an excuse they ordered by a messenger my father to come to the Shan-thein-sint village. Once my father was there the KIA men had tied him up with ropes and beaten him brutally after accusing him of a Burma army’s collaborator.

My mother had bravely followed him to Shan-thein-sint village once she knew of the kidnapping and torture of my father by KIA Kachins. She kowtowed and begged KIA Brang-naung who was just her son’s age that her husband was just a simple man earning an honest living and he was no collaborator and without him us five children and the whole family would utterly suffer.

After so many hours of begging for her beloved husband’s life she finally told his KIA captors and torturers that she would not go back home without her husband and if they were to kill him they also had to kill her. Angry KIA Kachin men then tied her together with her husband and dragged them to the Mone-san-yang the stronghold of KIA Fifth Brigade. On the way both my parents were constantly beaten by KIA Brang-naung and his Kachins.

My poor father went through torture-filled interrogation sessions in the hands of the Kachin torturers of KIA Fifth Brigade at Mone-san-yang. His eyes were picked out with a knife one by one, his eardrums were pierced and his ears were chopped off one buy one. They then cut off all his limbs one after another. Finally he died from the brutal KIA tortures.

Once he was dead the KIA Kachin men took my mother into the jungle near the village of Sut-hlyan and brutally killed her there. While she was dying they broke her both legs and hanged her almost-dead body upside down from a tree branch and fed her to the wild pigs while she was still alive and breathing. Anyone could understand our deep anguish and sorrows when we finally heard of what exactly the KIA Kachins had done to our Shan parents.

After the KIA kidnapping of our parents we children had to flee the village and hide as KIA was looking for us to kill us all. Following is the list of my brothers and sisters who have been suffering utterly form the kidnapping and murder of our Shan parents by the KIA Kachins.

The Kachin KIA has also been forcing every village, mostly Shan villages as there are not many Kachin villages left in the area, to supply at least 10-15 forced-recruits and if the village cannot provide that number of young men and women they are to pay hefty money to the KIA.

They have been forcing old men from the villages into their village militia and also taking many young women said to be trained as KIA paramedics. But the pretty Shan women mostly end up as the mistresses and whores of KIA officers and KIO political leaders while the rest are being raped constantly by the KIA Kachin soldiers.

Like our family there are many others who have suffered enormously in the hands of the Kachin criminals of KIA/KIO but they do not dare or have a chance to submit a complaint like me.

With this letter I faithfully and honestly report to you so that your Commission can thoroughly investigate and let the whole country and also the whole world know all the true facts about KIA (Kachin) criminals and the enormous sufferings of our (Shan) people. 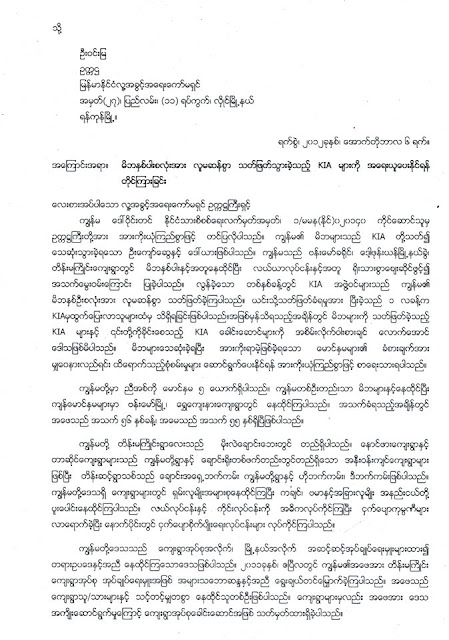 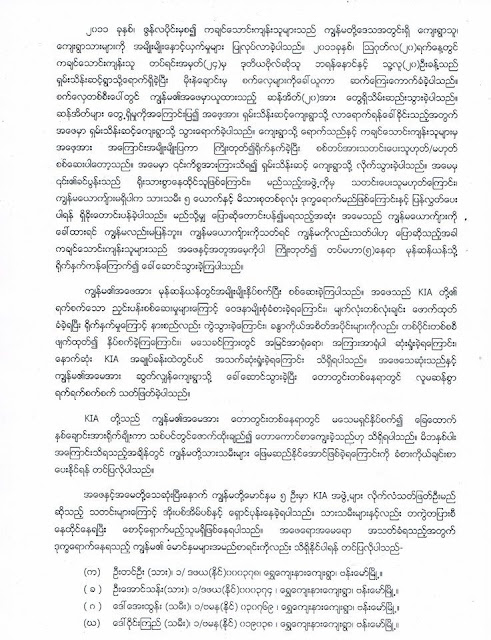 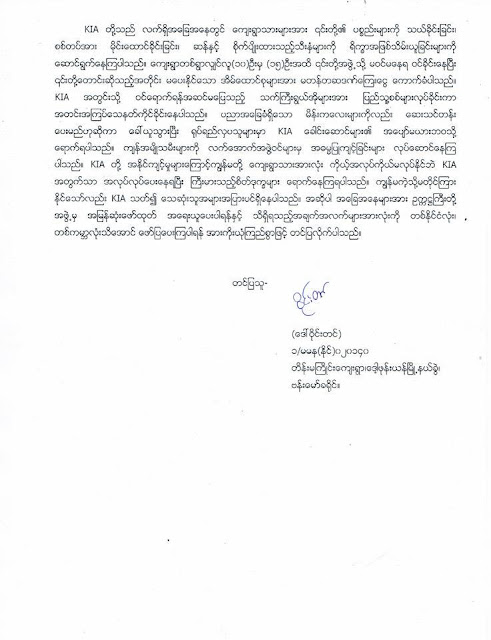