(This post is direct translation of articles from The Narinjara News Agency.)

The Arakan protest on October 9 began as just Buddhist monks only demonstration at the Bangladesh consulate in Sittwe the capital of Arakan State. But thousands and thousands of Buddhist lay people joined in and the protest became a mass protest more than ten thousands strong that day.

“We’re now in U Oattama Park. About 700 to 1,000 monks. But about ten thousand people, I think. The whole main road from the Bangladesh Consulate at West Model Ward is now filled with people. We are all peacefully demonstrating for our demands,” said Venerable U Pyin-nyar-zaw-tah one of the monks leading the protest that day.

“What we’re asking for is to fulfil our five point demands. First, we do not want OIC in Burma. Second, we do not want OIC in Arakan. Third, if the authorities want us to live peacefully together with the Bengali Muslims again they have to move the Muslims out of Aung-ming-ga-la Ward to outside of Sittwe. Fourth, Bangladesh authorities are to protect the Buddhist minorities in Bangladesh. Fifth and final, we support our President who clearly spoke of what to do with the Bengali illegals, altogether just five demands,” the monk explained clearly what they were demanding.

The monk also clarified the reason why they didn’t want OIC here.

“OIC is a foreign organization. The umbrella organization of Islamic countries. They have no reason to be here in our country. Coming here and opening an OIC office is just plain interfering in our domestic affairs. Whatever happening here is our own affairs and none of OIC’s business. Thus we strongly oppose and protest against the interference by the OIC.”

The protest started at about midday in front of the Bangladesh Consulate in Sittwe and the crowd was still in the town even after 4 in the evening. Armed-police and army units had blocked many roads into the town but they didn’t disturb the peaceful protest.

Women March Against OIC Opening an Office in Sittwe 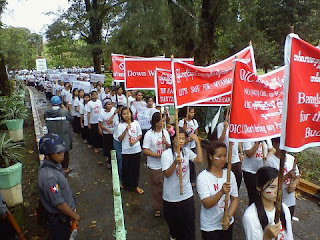 Next day on October 10 tens of thousands of Buddhist women took the streets in a protest march against OIC opening an office in their home town Sittwe. The officially-sanctioned protest started from the Ayezaydi Pagoda.

All the women participating in the protest march wore the white T-shirts bearing “NO OIC” and "Get Out OIC", and they initially gathered at the Wingabar Field and then ended the march at U Oatama Park after the rounds of the city.

Initially only about 2,000 women the crowd became more than 6,000 and the security forces eventually blocking the roads to the Sittwe Central Mosque to prevent the crowd from reaching the Mosque.

Following was the remark by Aung Mya Kyaw, the parliament member representing the Sittwe Constituency, on the constant protests against coming OIC presence in Sittwe and Burma.

“What we see is OIC is just a religious organization. It’s not an NGO as it is based on the cooperation of the Muslim countries. And our Burma is a majority Buddhist country. The OIC is steamrolling into our country by using the recent Buddhist-Muslim riots as an excuse. We strongly oppose their presence here as the OIC will support the Bengali Muslims here just to expand Islam in Arrakan.” 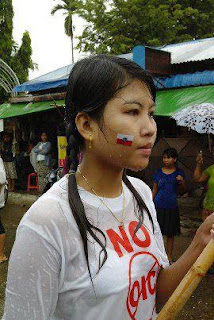 A town elder from Sittwe also said that the people were bitterly against OIC and thus the Government both State and the Union should listen and scratch the agreement to let the OIC into Burma.

On September 11 the bilateral agreement to let the OIC establish offices in both Rangoon and Sittwe was signed by the Border Affairs Minister Lt. General Thein Htay and the OIC representative.

According to the BBC Burmese Programme, OIC’s Islamic-Minorities-Affairs-Department’s Rohingyas-Affairs-Manager Ms Dina Mandini has confirmed that OIC will steadfastly continue on with opening offices in Rangoon and Sittwe very soon despite the massive daily protests in both Rangoon and Sittwe against the OIC presence on their soils.

Ms Mandini also confirmed that the OIC Rangoon Office is a logistic office facilitating the regular supplies for Rhingyas in the Arakan, and other diplomatic businesses like Visas for the OIC personnel. The Sittwe office will basically provide humanitarian support to the local Muslims in Arakan.

Burma now is being criticized by the concerned Buddhists from all over the world and also by the Buddhist countries like Thailand, Cambodia, Sri Lanka, and  Laos for agreeing to let the Multinational Muslim Mafia OIC open offices in Rangoon and Sittwe.

What is the point of President Thein Sein openly rejecting the existence of so-called Rohingyas while his minister Thein Htay is letting the openly pro-Rohingya Islamist OIC walk all over us Burmese and our brothers Yakhines. Are they fricking stupid or what?

One extraordinary thing about Burmese Buddhists are that, this is the dire warning for anyone who wants to pick a fight with them, they are not your stereo-typical ordinary Buddhists - gentle and turn-other-cheek type - as they are  an extremely-violent militant race and an average Burmese boy or man or even a monk is willing to die and kill than giving up an inch of their hard-fought ancestral land.

(OIC, the most dangerous Sharia-Jihadic Group in the world)


(Anti-OIC protest in Burma.)
(Buddhist monks' protest against Islamist killing of US Ambassador to Libya.) 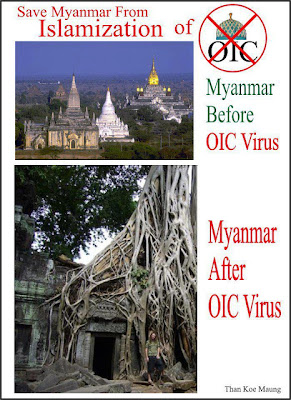 Related posts at following links:
OIC Conspiracy to islamize Northern-Arakan?
Jihad on Buddhists Destined for Destruction by Islam
1411 Duel between Thameinbaya and Garmani
Rice Riots to Race Riots (1967)
Horror of Political Violence in Burma (1988)
Posted by Hla Oo at 11:53 AM