(Direct translation of Aung Shin’s article from his Blog “A Journalist from Myanmar”.) 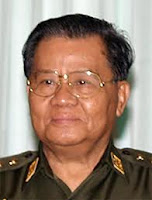 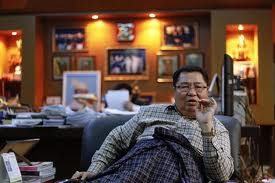 Standing guard at the door was an army colonel. Few other army officers were there too. They appeared to be acting really nervous and seriously alert as if a very important VIP was inside the building. I had to turn around and go away from this place, I warned myself. But it was too late.
The guard Colonel had seen me and he called out and asked me to approach. I had no choice but to go there and once I was there he checked me out thoroughly and then asked me why I was there. So I told him the truth for why I was there.
The army Colonel didn’t say much after that. Then he surprised me by asking me if I wanted to meet the Senior General who was resting inside. It was unbelievable that I just couldn’t answer back immediately. Then I told him I hadn’t a valid reason to see the SG.
He just told me to go inside. Maybe he thought I was someone important enough for his SG. So I didn’t say a word and just went inside cool and calm. And there in the room was the Senior General himself standing near an easy chair. He was talking to the officers when I interrupted him.
He was the real Senior General. Not a double I checked him out thoroughly.
He wasn’t like what we’d seen in the newspapers or even on the TV. Nothing like when I saw him few times outside before. He was surely cool and calm. Sort of take-it-easy, no-worries relaxing style.
He wasn’t in his usual army uniform. He wore a short sleeve cotton shirt and large-chequered cotton lon-gyi (sarong). He didn’t look like the most powerful dictator of Burma at all but just an ordinary local elder. His stare at me wasn’t that strong at all. They made me at ease though.
He looked at me and then sat down into the easy chair nearby. I just stood there unable to say or do anything. He then asked me softly what I did for a living. I vaguely answered that I worked for a company.
One thing I surely knew was that whatever true or false I said he would simply believe me as he could easily find out about me an insignificant little man for him. I was also fearful that if he wanted to I could easily disappear in this massive compound.
It shook me to the bone while thinking about the possible danger I was facing here. But I managed to keep my cool as whatever I did wouldn’t matter anymore from that point. As the SG I wasn’t anyone interesting enough for him and what he had to do was just give a nod to one of his officers and I would disappear out of his sight probably forever.
Only after a while of awkward silence a colonel standing near him sort of waved me out and I just slowly backed out from there. I didn’t dare turn my back on him. I was worrying the rest of the day of what would happen to me later. But nothing really happened except an officer from the War Office drove me back all the way to nearby Pyinmanar town that evening.
Benefits of Meeting the Old Man 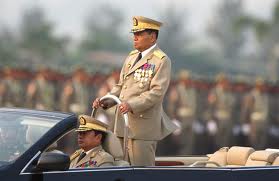 From that accidental encounter I was given a permission to visit the War Office regularly   every month. But not just anytime anywhere I wanted. Only when I had a valid reason to visit the War Office and sometimes just to see the SG himself.
How and why I did get into such a difficult and dangerous situation I couldn’t even figure it out. I didn’t tell anyone about my precarious situation also as I didn’t dare telling anyone. What I figured out was if I told anyone and if that person believed me then I could be in danger. But if he or she didn’t believe me then I would be a laughing stock. So I just kept my mouth shut.
After that I’d been inside the War Office regularly once or twice every month. My trips were neither clandestine nor openly. Was it good or bad for me I didn’t really know? Maybe it was the Senior General’s cunning plan to use me when or if he needed me for their advantage, I didn’t really know? It wasn’t really a direct contact with the SG or mine wasn’t even an important job. They were just letting me easily enter and exit the very important War Office.
I didn’t really know what were their benefits in giving me a direct access to the SG from their point of view. But from my side I was so pleased that I could get some interesting news and information direct from the War Office by having an easy access.
I was even thinking that one day I would have a chance to interview SG Than Shwe if I was given an opportunity. Then I could be able to ask him whatever I would want to know from him, I dreamed.
At that time I was working as a journalist for our journal’s branch office at Naypyidaw. Even though I could not write down as the current news whatever I knew on the pages of the journal due to the difficult political situations back then I still was finding out a lot about that period, about Naypyidaw, about the government and the military in general and especially about some senior army officers and the secretive War Office in particular.
I’d learned to relate well with the army officers without fearing them like before. Only one important thing during that period was that I had to control myself not to tell others what I   did know. As a natural born journalist I am quite curious and always trying to ask people what I want to know. And I would like to tell others what I knew too. During my War Office period I had to control myself really hard to suppress that inherent character of mine.
My Distant but Close Relationship with the Old Man
During some of my visits to the War Office I often had a chance to see the old man. Once in a while I even got a chance to speak to him a few words. Most of the time I didn’t get to talk to him but I was always allowed to observe him close up.
What I was to be so careful during that time was not to ask any generals or senior army officers about him. I had to pretend as if I didn’t really care. The old man also was quite calm and he rarely spoke and when he did only a few words was spoken. But he would often observe people by staring carefully at them from behind his thick glasses.
As he had a stroke a few years back he needed help whenever he tried to get up from sitting down or lying on bed. He could walk only very slowly with a visible limp. He could only speak with slow and stuttering stammer. Some people close to him told me that his speech was impaired as his tongue was severely weakened by the stroke.
One other thing I noticed was the visible bent of the middle finger on his left hand. He always wore light and airy cotton clothes which were quite ordinary and he always wore only one ring on one of his fingers.
But whenever I was near him I always felt completely overwhelmed by his presence. Maybe I knew very well that he was the almighty commander-in-chief of the most brutal army.
And he always seemed to handle any important matter in a thoughtful and calm manner. Even to his obedient generals he never remarked in an intrusive or blunt manner and he’d never overly committed himself.
But sometimes even some of his mindless small talks could end up as massive grand projects all over Naypyidaw as his loyally-obedient generals were overly-frightened of him.
His Building the Capital and His Character 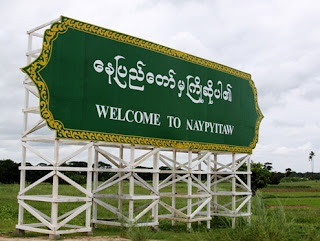