(Will a large scale assault on the KIA HQ at Laiza on the Chinese border begin soon?) 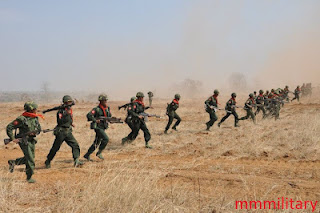 On March 6 this year Burmese military staged a large-scale operational exercise involving a light infantry division and tanks and heavy artillery in Meikhtila. And the Commander-In-Chief General Min Aung Hlaing had attended and watched the war-game.
The replicated field and the sand model used as the enemy target was clearly the close replica of KIO headquarters at Laiza on the Chinese border. The most significant thing about the exercise was that the whole thing was broadcasted on the army-controlled Myawaddy TV while the KIA/KIO and Burmese government had been actively negotiating about a peace treaty.

Unlike most other ethnic insurgents KIA has so far refused the government’s generous ceasefire offer and even during the ceasefire talks in China it had attacked various military and civilian targets all over Kachin State.
And the daily Mandalay-Myitkyinar civilian train is the most favorite target of KIA to mine and also to shoot at the traveling public.
KIA Commander-in-Chief General Gun Maw, the hardest hardliner among KIA top leaders, has repeatedly and openly been admitting that they have been forcefully recruiting one man from every household to build up their military strength to defend against the coming major offensive by the Burmese army.
Even though the Burmese president has ordered a total ceasefire Min Aung Hlaing’s army has refused to follow the president’s orders and happily engaging the aggressive KIA along the border with China.
With the explicit permission of China, who is gradually losing patience on KIA steadfastly and stubbornly refusing to lie down and turn over so that the Chinese companies and individuals can continue exploiting the commercial opportunities abound in Burma, the possibility of a major wiping-out operation against KIA’s Laiza headquarters is absolutely certain.
And the March-6 military exercise aiming at the exact replica of Laiza recreated in Meikhtila and the public broadcast of the exercise seems to be an explicit threat to KIA to be careful in boasting and frequently releasing their victory videos on YouTube.
Especially the videos of fat-ass KIA officers playing lazy golf together with fat-belly Chinese businessmen and officials in KIA-owned golf courses on the border. Warning to the KIA from the army is that your times are being counted towards the apocalypse!
Broadcasting widely the long footage of army’s latest war game capturing the mock KIA fortress at Laiza on the army’s public TV is the deviation from their normally secret behaviour for the army. Especially for the operation involving the Chinese-made heavy artillery guns such as 155, 120, and 105 mm howitzers and the latest 59D tanks supplied by China.
All the infantry troops participating in the war-game were also the battle-hardened ten LIBs (Light Infantry Battalions) of the LID (Light Infantry Division) 99 which was just withdrawn from the battlefields of Kachin State for their R&R.
Some of the weapons used in the war-game were Chinese-made short range multi-tube rocket launchers and Burmese army has been looking for an opportunity to use these recently-acquired rockets in a real situation like permanently built-up and crowded Laiza.
But the billion dollar question is can Burmese army overrun the KIA stronghold like they did to the KNU strongholds at Manaplaw and Kawmoora on the Thai border in the 1990s?
According to many military experts familiar with Burmese civil war KIA camps are not as robust and defended as KNU camps were and once the real war begins Laiza will not last for more than a few days.
And casualty wise, the past operations against KNU had costed the army at least 20,000 men but the estimated human cost against KIA should be much less than that and Burmese army already had four LIDs, namely 33, 66, 88, and 99, that is close to 35,000 men, in the vicinity of Laiza already since early April.
The reason for fewer human casualty is the availability of heavy guns like 105 mm Howitzers supplied by China. During the KNU offensives in the 90s the biggest heavy weapon Burmese army had was only 120 mm mortars. So this time instead of sending in the rifle men Burmese will be sending the devastating artillery shells first and then the infantry supported by the tanks and attack helicopters and even the MIG jets. An overwhelming shock and awe operation against lightly-armed KIA?
By now, the Burmese troops are only waiting for the final order coming from either President Thein Sein or C-in-C Min Aung Hlaing, nobody really knows from who in this confusing political climate.
Whether the war-game was just a threat, as a pressure on the KIA to agree to a peace settlement, or the real preparations for an actual operation to take the Laiza soon is the fact only Vice-Senior-General Min Aung Hlaing (or the chief of the PLA’s south-western army corps) can tell!