(Translation of the Prologue of Samar Nyi Nyi’s book “Escape From the Werewolves”.)

Four prisoners, ABSDF Chairman Htun Aung Kyaw and Executive-Committee members Cho Gyi and Kyaw Wai and Kyaw Kyaw Min, standing almost naked on the low Assam Hill known as the Execution Hill were shaking to their cores in the bone-chilling cold of the freezing rain and icy wind.

But their tormentors were not as they all were in their rain coats or thick ponchos. ABSDF General-Secretary Aung Naing and Chief-of-Staff (CS) Than Gyaung and Vice-Chief-of-Staff (VCS) Myo Win.

Behind the prisoners was a large hole already dug as the mass grave for them. Armed guards mostly young men and rural boys holding Chinese M-22 rifles were surrounding the four prisoners and their military leaders facing the prisoners.

All the guards and Aung Naing were pissed-drunk from the local moonshine they’d been drinking since the early morning. But CS Than Gyaung and VCS Myo Win were both sober as those twos never drink while working. All the guards were visibly excited by the new experience of witnessing the coming execution. 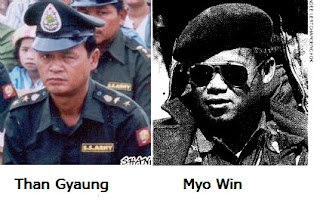 Myo Win started the interrogation, “Okay Cho Gyi, now you fucking tell us where you keep your wireless set?”

“VCS I don’t know nothing about no wireless set,” replied Cho Gyi.

“Cho Gyi, why do you keep on changing your words? You are the fucking EC and you should keep your words,” interrupted CS Than Gyaung.

Cho Gyi just softly spoke back, “CS please, if we could buy it we’ll buy and give it to you.”

“If you guys want to kill us just kill us all. Since we cannot take the pain no more we’d been telling you craps and many innocent people are already in shit. Just fucking kill us. Please don’t kill our revolution,” begged Htun Aung Kyaw constantly in pain from the brutal torture he’d been receiving in their hands.

Upset by what Htun Aung Kyaw had just said Myo Win raised the sword in his right hand and stepped forward as if to cut him down, but Than Gyaung stopped him in his track, “Myo Win, control your anger, Just listen to me!”

“Okay, Cho Gyi, what do you have to say? Say it again, motherfucker,” Myo Win then yelled at Cho Gyi.

“You guys have decided to kill us, haven’t you? If you guys believe the world will not know of this injustice, just do it. But I’m warning you, you will reap what you sow,” replied bitterly Cho Gyi.

“What’s happening to us now will repeat again in the future. Than Gyaung, soon will come your turn. Myo Win will kill you. Maybe you knew that already,” continued Cho Gyi fearlessly.

“Hah, motherfucker, stretch your arm out, stretch you fucking right arm out, motherfucker,” yelled Myo Win but Cho Gyi refused to follow that order. Immediately the guards and Myo Win jumped on him. Fists and combat-boots and rifle butts fell on Cho Gyi’s seriously weakened body.

“You want to get hurt again? Get the hand out front,” yelled Myo Win again and this time Cho Gyi reluctantly followed.

And once Cho Gyi slowly raised his right hand out in front Myo Win pulled out the sword from his belt, raised it high above, and brought the blade down swiftly onto Cho Gyi’s wrist. The hand was cut off clean from the wrist and fell on the muddy ground.

Myo Win bent down and stuck the tip of the blood-stained sword into the cut-off hand and picked it out from the ground. The force of the penetrating sword had caused the fingers of the cut-off hand to suddenly bend backward as if the hand was still alive.

Myo Win didn’t take the bloody hand off his sword’s tip but forced it into Htun Aung Kyaws’ mouth.

“Here, bite it, your big brother’s hand, don’t let the blood out off your mouth, swallow it all,” yelled Myo Win at Htun Aung Kyaw.

While Htun Aung Kyaw was forced to bite down Cho Gyi’s cut-off hand by the still-bleeding wrist Cho Gyi surprisingly was holding his right hand tightly in his left hand and shut his mouth tight as he was caught in a horrible surprise.

Everybody was in total silence. The guards were simply shutting their mouths for Myo Win and Than Gyaung were uncharacteristically silent. They both might be thinking of what Cho Gyi said to them that Myo Win’s gonna eventually kill Than Gyaung.

Than Gyaung definitely was still hearing in his ears what Cho Gyi had said just before his right hand was chopped off by Myo Win. His face was tense and still not back to normal yet.

Aung Naing broke the silence and asked, “How about Kyaw Wai here?”

Two of the guards Zaw Zaw Win and Than Zaw jumped on Kyaw Wai who had already lost to Myo Win’s sword his right hand and all the toes on his left foot on previous occasions of torture. They hit him with their bare fists and kicked him till he fell on the ground.

“Confess, confess now, you’ve been hiding the poison bottles to kill our leaders,” asked them while still kicking him now on the ground.

“Stop, please stop, I am telling the truth!”

“I ain't the military intelligence and the rest are not too. This is total injustice, and ……” Kyaw Wai didn’t even get to finish his sentence.

As everybody was staring unbelievably at brave Kyaw Wai emptying his lung out Myo Win stepped forward and strike at Kyaw Wai’s neck with such a single forceful stroke of his sword the head was cleanly chopped off and fell on the ground. The decapitated head rolled down and stuck between the loose piles of soil from the hole in the ground and stood upright on the neck.

As the big wide eyes were still opening and seemed to be staring at them Myo Win madly kicked down the head into the big hole. The headless body then collapsed and fell sideways but the blood was still spraying from the neck with “fru fru” winding noises till no blood left to come out.

“Kick the fucking body down the hole. Don’t fill the hole yet. On 12th the day after tomorrow we will have more bodies to bury,” yelled out Myo Win.

Aung Naing then ordered the guards, “Take Cho Gyi to the clinic. Ask the nurses to bandage his hand and stop the bleeding. And give him a glucose injection too. The rest, just put them back in the stockade. I’ll see all of you again!”

(The author Samar Nyi Nyi took to the jungle after the failed 8-8-88 Uprising and joined the ABSDF-NB then at Pajau KIA HQ Camp on the Chinese border. He and the educated rest - the real university students - were arrested and tortured and some of them eventually murdered by the uneducated low-lives at ABSDF army in 1992. But Samar Nyi Nyi was timely saved by some KIA men and he eventually surrendered back in Burma.)