Two Burmese Doctors: What Khin Nyunt Did to them? 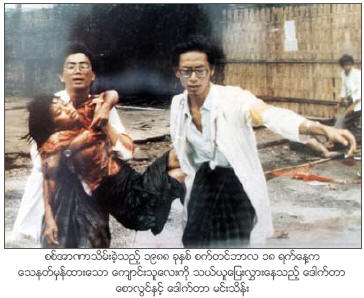 During the failed 8-8-88 Uprising in Burma there was a photo of two young doctors carrying a fatally-wounded schoolgirl taken right in front of the Rangoon general Hospital.

The whole of that day the heavily-armed soldiers of brutal Burmese army had been indiscriminately shooting the unarmed civilian protesters all over Rangoon and the young schoolgirl was just one of many thousands casualties on the streets of Rangoon.

Almost everybody in Burma and probably the whole wide world had seen that iconic photo but no one really knows who they were. And now I would like to tell the story of that picture taken on 18 September 1988 the infamous day the army violently took over Burma from the previous military-controlled Socialist government.


In the photo the student girl still in her school uniform of white blouse and green sarong covered in blood from her fatal gunshot wounds was carried away from the site of shootings by two men who apparently were doctors as they were in their duty-coats and their stethoscopes still dangling from their necks.

Everyone who saw that photo instantly got emotionally upset and angry by the heartbreaking display of hell in Burma and the futile struggle of Burmese people. But I honestly believe no one really knows what really happened to those two doctors later. And this is the sad story of them two doctors as I’d known both of them well.

The one holding the upper torso of the wounded girl was Dr. Min Thein and the one holding her legs was Dr. Saw Lwin. Both were extremely smart and academically excellent students from the Rangoon Institute of Medicine (IM-1) before they became practicing doctors at the RGH.

Dr. Saw Lwin was the best student in the whole Thin-gan-gyun Township when he passed his nationwide matriculation and got into the medicine. His elder sister was also a medical doctor.

Dr. Min Thein was also a top student when he was studying medicine in the university. His brother Win Thein is also a medical doctor and their father was a senior public servant as the high-ranking director of a government department.

After the military coup that day Dr. Min Thein fled from the chasing MIS (Military Intelligence Service) and took to the jungle together with many thousands of 8-8-88 students.

He was serving as a medical doctor for the students’ army ABSDF (All Burma Students’ Democratic Front) on the Thai border when he was sent back to Rangoon on a clandestine duty. During his stay in Rangoon there was a much publicized press conference given by MIS General Khin Nyunt.

Khin Nyunt was basically giving the students who took the jungle and then came back home a general pardon by inviting them to report to the local authorities as his military government wouldn’t be taking any adverse actions against them.

Dr Min Thein’s father the loyal government official was concerned and thus he himself reported his son to the local military division. Only then Dr. Min Thein admitted to his close friend Dr. Saw Lwin that he was on UG (Underground) duty from ABSDF.

But then was too late as next day the Military Intelligence agents took him in for interrogation. He was detained for a while and later returned to his parents only after about a week in a MIS detention center.

By then he was seriously sick. All his limbs were dangerously swollen and he couldn’t urinate no more. So Dr. Win Thein (Dr. Min Thein’s brother) called Dr. Saw Lwin to let him know about Dr. Min Thein’s deteriorating situation.

While Dr. Saw Lwin and Dr. Win Thein were trying to get Dr. Min Thein admitted to the Rangoon General Hospital the same MIS agents had physically stopped them and told them that he was allowed to admit only to the BMH (Base Military Hospital) in Mingaladon, not into a civilian hospital.

Dr. Min Thein just simply refused to go into a military hospital and ended up not in a hospital but at home. Dr. Saw Lwin and Dr. Win Thein tried to treat him at home as best as they could.

Without a proper medical treatment at a hospital Dr. Min Thein passed away next day.

Right after his death Dr. Saw Lwin and Dr. Win Thein took his body to the RGH morgue and did an autopsy together with one of their teachers a medical professor from the Institute of Medicine.

The obvious cause of death was the horribly-shrunken kidneys caused by the unknown injection administered by the MIS agents during his detention. They, the MIS and General Khin Nyunt, did kill poor Dr. Min Thein, period.

Just because he was in that iconic photo? Just because he as a good-hearted doctor tried to save the life of a young wounded schoolgirl? They killed him out of spite for just nothing!

Once MIS knew the unauthorized autopsy on Dr. Min Thein remains they forced the professor to sign a gag order not to say a thing about the autopsy report and they also tried to arrest Dr. Saw Lwin.

So he had to flee and hide in some rural hideout. Before his flight to safety he was running a clinic in a Rangoon’s destitute satellite township. Some days he was not only treating the poors free but also providing them with free medicines.

I was then working with him in his clinic. I had witnessed his good deeds with my own eyes. He once took care of a poor cancer patient at his own expenses and didn’t even ask a single kyat from the poor patient.

Because the MIS couldn’t catch him the government forced Dr. Saw Lwin’s father to retire from his govern job. And the old man died from a heart attack in 1994. Only then Dr Saw Lwin came back to Rangoon.

By then he innocently and truly thought that the MIS had forgotten all about him and the cursed photo as nothing had happened to him initially. So he applied for a job working for the government hospitals. He finally got a job as a doctor in a small village-group hospital in Bogalay Township of the Irrawaddy Division.

At the beginning of his stay in Bogalay Township he was left alone by the local MIS agents for a while. Only weeks later they started troubling him by visiting him and closely watching him.

By 1995 the MIS visits for interrogations were getting more frequent and becoming quite disturbing for him. Finally he couldn’t take it no more so he came up to Rangoon to get help from Daw Suu and her NLD (National League for Democracy) while she was temporarily released from her on and off long term house arrest.

But he didn’t manage to see her and eventually he did come back to Bogalay Town. Once he got back home he was summoned to the Township Administrative Office by the Secretary of the Township Law and Order Restoration Council (the township level SLORC). He ended up being grilled the whole day by three MIS agents in the office.

That evening Dr. Saw Lwin came back home apparently depressed. According to his housemates he was noticeably disturbed after that day. He wouldn’t say a word to them and whenever they tried to ask what was bothering him he would just shut up or change the topic. They also understood that he didn’t want the same fate like his had fallen upon them by telling them his troubles.

That day he took a long leave without pay from the hospital and started packing his belongings. Next two whole days he wouldn’t come out of his room and everything inside was quiet and not a single movement was heard.

His housemates were so worried and concerned they finally broke his door down and found him hanging from a rafter. MIS ruthless hounding was so unbearable he had given up hope and finally committed a suicide.

I felt really sad for my Doctor Saw Lwin’s untimely death. He was a truly decent man.

Stars have their own lights. Their rightful place is far high up in the open sky. In a clear night we can see them flashing like diamonds in the sky.

Our youths are like the stars. They have their own qualities like starlight. They are smart and clever. They have high moral values. And they are decent human beings.

But unfortunately many of them are falling untimely like some old burnout stars. Thus I would like to call our Burma the country of falling stars.

Stars are falling in our Burma. Who are responsible for them falling down so young? How painful are the parents’ deep sufferings from the early deaths of their dearest sons and daughters? How many more of our precious youths are to be lost?

MIS General Khin Nyunt must be charged for his crimes against humanity, tried in a court of law, and hanged till death for the murder of Dr. Min Thein and the unlawful death of Dr. saw Lwin (and the countless others).

As long as Butcher Khin Nyunt is still alive and hanging around smiling down on the graves of his countless number of victims Burma will never have true Peace and Reconciliation.)


(Above video was shot partly from third floor of old US Embassy by Maha Bandoola Park.)


A Dr Win Zaw has recently come out and claimed that he was the doctor at the left on that famous photo not Dr. Min Thein. Following is the his re-labeled photo and comments from Dr Win Zaw's Face Book page. 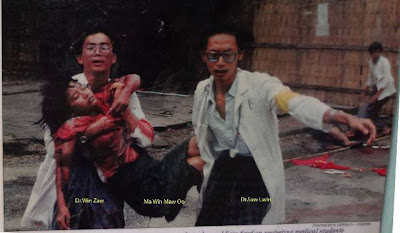 Our purpose for going outside that day was to save peoples' lives. No other intentions. But we were photographed and that photo becoming historical record. After that photo was published on 3rd October 1988 Newsweek magazine MI detained me and interogated for 5 days. Dr. Saw Lwin 3 days. After that I have had no problems with MIS (Military Intelligent Services).

8.8.8.8 Silver Jubilee19.8.1988, Win Zaw (Final part II Student (left), Dr Saw Lwin (House Surgeon)(Right) carried injured 8th Standard Student of Kyee Myin Daing State Middle School (4), at the junction of Sule Road and Marchent street. At that time, Ma Win Maw Oo was alived but the BP was Zero.The blood was dripping from the wound of right arm. The student uniform was soaked with blood. The white colour of uniform became into red.When we lift the girl, the blood was also dripping from the body. After, we put Ma Win Maw Oo, into the Ambulance, we also made resuscitate. We did bandaging the injured right arm and put drip line and run Ringer/ Saline. to be continue-----
Posted by Hla Oo at 12:23 AM