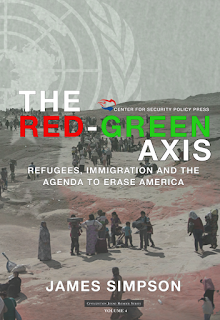 The President has launched a “Welcoming America” initiative which seeks to “seed” refugees throughout our communities and weed out “pockets of resistance” with a full-throated effort vilifying anyone opposing his radical agenda. It is literally an offensive to erase American laws, traditions and culture, and replace them with a pliable, multi-cultural society that will vote the Left into the “permanent progressive majority” it seeks.

Jim Simpson has done a characteristically exacting investigation of the extent to which the red-green axis – the radical left, with its activists, contractors, philanthropies and friends in the Obama administration, and Islamic supremacists – have joined forces to use U.S. refugee resettlement programs as a prime means to achieve the ‘fundamental transformation’ of America.


His expose is particularly timely against the backdrop of the government sponsored effort to ‘Welcome New Americans’ and suppress those who understand the imperative of “resisting” the migration to and colonization of this country, or hijra, that Shariah-adherent Muslim believed they are required to undertake.