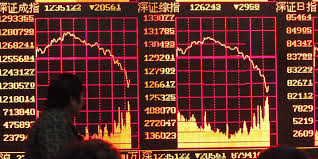 
In Hong Kong, which has until recently fared better than the Chinese mainland, the benchmark Hang Seng Index closed down 5.8%, wiping out all of its gains for the year. A gauge of Chinese companies with Hong Kong listings, known as H-shares, plunged 6.1%. A spokesman for the China Securities Regulatory Commission, Deng Ge said in a statement that "irrational selloffs" had increased, and described the current market mood as "panic sentiment."

Hundreds of Chinese stocks were frozen from trading Wednesday, with 1,287 companies halted. That represents 45.6% of the constituent stocks of the Shanghai Composite and Shenzhen Composite and $2.5 trillion of market capitalization, according to data from FactSet.

China has put an arsenal of measures to work in recent days to stem the selloff that has wiped out roughly $2.4 trillion in value from China's equities. On Wednesday, the China Securities Regulatory Commission announced that the China Securities Finance Corp., a commission unit that provides financing for margin trading, will increase purchases of small-cap stocks. 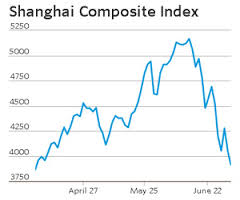 The move follows an earlier pledge by the company to buy blue-chip shares to stabilize the market. China's central bank said it would help ensure the unit has ample liquidity to stabilize the market. Also on Wednesday, regulators said they would ease rules for insurers to buy blue chips and said state-owned firms shouldn't sell their holdings in publicly listed arms.

Beijing's attempts are undoing liberalization efforts that the country had pursued during the past year, said Gan Ai Mee, an investment manager at Aberdeen Asset Management, which has $490.8 billion in assets under management, and less exposure to Chinese stocks relative to other markets in its portfolio. "It doesn't bode so well for investor confidence," she said. "It's a step backwards in terms of financial reforms they're trying to put through."

Investors' shaken confidence also has dented the Chinese yuan. In the onshore market, the currency hit 6.2094 per dollar compared with 6.2100 when the market closed Tuesday. Yet the price for the yuan in the offshore market, where it can trade freely, fell to as low as 6.2290 per dollar—the weakest level since March 18—compared with 6.2212 late Tuesday. China's central bank fixed the yuan's official rate for Wednesday at 6.1175 a dollar, a touch weaker than 6.1166 Tuesday.

Spot yuan trading in the onshore market has been 1.6% weaker than the reference rate in Wednesday trading. When the offshore rate trades weaker than the mainland rate, that typically indicates waning demand among non-Chinese investors for the currency. China's central bank controls the onshore rate by setting a daily reference rate for the yuan, but allows it to trade 2% above or below that level. At the same time, the dollar rose to a five-week high against other currencies Tuesday, as investors seek safer assets amid China's rout and uncertainty about Greece. 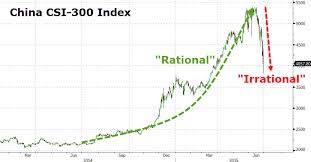 Investors also are selling Chinese bonds that trade offshore. "People lost confidence towards China's credits. Everything is down. The riskier the bonds, the heavier they're being sold. Property developers are having some of the biggest casualties," said Frank Huang, fixed income trader at SinoPac Securities in Hong Kong. Bond yields of major property firms such as Agile Property Holdings Ltd. and Shimao Property Holdings Ltd. hit their highest levels in several weeks. Bond prices move inversely to yield.

While high-quality investment-grade bonds, including top state-owned companies, have been resilient in the past few weeks, these assets are also getting pressured, traders say. Yields of bonds issued by state-owned enterprises such as grid operator State Grid Corp. and oil giant Cnooc Ltd. have risen seven to 10 basis points Wednesday morning.

Inside China, investors seeking to keep their money out of risky stocks are flocking the onshore bond market. Benchmark 10-year Chinese government bond yields fell to 3.4% Wednesday from 3.6% earlier this month.

Over the weekend, Beijing suspended initial public offerings and made it easier for investors to borrow to buy stocks. China's brokers also vowed to buy shares until the Shanghai Composite hits the 4500 level. Despite the recent tumble, China's main stock index is up 72% over the past year and 10% since January. Still, concerns are brewing that Beijing's increasingly desperate measures to calm markets are building bigger risks into the country's financial system.

"The rescue plan could potentially increase the systemic risk down the road," analysts from Société Générale wrote in a research report. "Initially most of the stock market risk was with households, but with the rescue plan, systemically important institutions are taking up more risk." 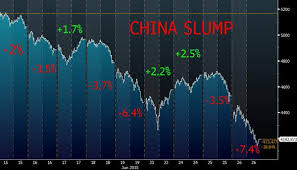 Worries about China's faltering demand amid the stock slide are also driving down commodity markets, with copper up 0.1% after hitting a six-year low on Tuesday. China is the world's top copper consumer, accounting for about 40% of global consumption. Pessimism about China, coupled with worries about a supply glut, also sent oil prices to a near three-month low. Brent, the global oil benchmark, is down 70 cents at $56.16 a barrel Wednesday, after falling as low as $55.10 earlier.

"Fears about the risks to financial stability and the wider economy have contributed to negative sentiment toward commodities," analysts from Capital Economics wrote in a research report. "The impact has been felt most in industrial metals, such as copper, where China is by far the most important consumer."

The Australian dollar weakened the most of any currency in Asia, falling 0.8% against its U.S. counterpart, as the commodity selloff intensifies. Meanwhile, eurozone leaders set a Sunday deadline for Greece to come up with a new set of more stringent measures to avoid defaulting on the European Central Bank and exiting the currency union.


Global bond markets rallied as investors sought haven assets in developed-country debt. Yields on benchmark U.S., German, and U.K. bonds hit their lowest levels in more than a month. On Tuesday, the International Monetary Fund warned of the risks of raising rates too early in the U.S., and called for the Fed to delay a raise until 2016. Concerns that the Federal Reserve would raise rates prompted a bond selloff in June, given concerns that higher rates would lower their outstanding value.
Posted by Hla Oo at 9:24 AM