Then the gunman, who according to a law enforcement official was driving in a rented silver Ford Mustang convertible, moved on to his next target more than seven miles away: a Naval reserve center. There, he rammed into a gate at some point during his shooting rampage and was eventually killed by police, a U.S. official said. Now, with the FBI in the lead, a terrorism task force is investigating, a law enforcement source said.

The gunman first opened fire at this military recruitment office located in a strip mall off Lee Highway in Chattanooga. Blue evidence markers, believed to be the location of spent shell casings, can be seen here. Gina Mule, a server at a restaurant who took this photo, said she saw a man in a car firing a high-powered rifle at the recruiting offices at about 10:50 a.m. ET Thursday.

An FBI investigator works outside a military recruiting center where a gunman opened fire Thursday, July 16, in Chattanooga, Tennessee. Authorities say Mohammad Youssuf Abdulazeez, 24, opened fire first on the recruiting station and then moved to a U.S. Navy facility seven miles away. At the Navy facility, he fatally shot four U.S. Marines and wounded three other people before he died in police gunfire. 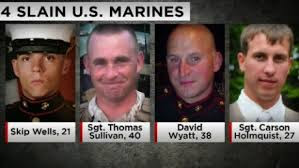 Who was the suspect?

Authorities say Mohammad Youssuf Abdulazeez attacked two military centers in Tennessee. Four Marines were killed. In the neighborhood where Abdulazeez is believed to have lived, police cars and an ambulance were on the streets. Residents were blocked from reaching their homes. A woman was escorted in handcuffs from the area, but it was unclear whether she was connected to the alleged gunman.

"We will treat this as a terrorism investigation until it can be determined that it is not," Reinhold said. U.S. Attorney Bill Killian earlier told reporters that authorities were treating the shooting as an "act of domestic terrorism." Authorities have released few details about the alleged gunman, but some details have begun to emerge about his past.

Abdulazeez was arrested in April for allegedly driving under the influence. He had been scheduled to appear in court later this month. Abdulazeez was not in any U.S. databases of suspected terrorists, a U.S. official said. He was born in Kuwait and had Jordanian citizenship, two law enforcement officials said. He was a naturalized U.S. citizen, one official said. And he may have traveled back to the Middle East in recent years. 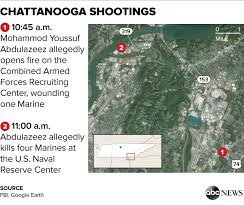 Almir Dizdarevic, who was Abdulazeez's mixed martial arts coach when he was a teenager, said his former student's father told him about two years ago that his son had left the country to "move back home." Since then, Dizdarevic said when he ran into Abdulazeez at a Tennessee mosque several times, his former student told him he was teaching wrestling and doing well.

Neighbor Dean McDaniel said he'd known the family for most of his 17 years living in the Chattanooga suburb of Hixson, Tennessee. He first crossed paths with Mohammad Abdulazeez when he was an elementary school student, and later would see him from time to time when he visited his sisters while they were baby-sitting McDaniel's children. "He was a good kid. ... They're good people," he said. "I've never had any kind of conflict with them."

Abdulazeez graduated from the University of Tennessee at Chattanooga in 2012 with a degree in electrical engineering, university spokesman Chuck Cantrell said. "He always contributed, always did what I asked him to do. I never had any problems out of Mohammad," Emily told CNN's "Erin Burnett OutFront." "He was very humble when he was in high school. He'd always listen to me, looked me in the eye. He was just -- in high school he was a great kid."

A quote appeared beside his photos in his high school yearbook: "My name causes national security alerts. What does yours do?" For years, Samantha Barnette sat next to him in class, but now she said she feels like she never really knew him.

"He was also incredibly intelligent, which really makes me wonder about his true motives for doing this," said Barnette, who posted a photo of the yearbook page on Facebook. "He was always getting recognized for his high grades and getting awards all throughout school. It's upsetting to see him waste it all."

Shootings were reported Thursday at a naval reserve center and a military recruiting center in Chattanooga, Tennessee.  The shootings unfolded at two sites over 30 minutes, Reinhold said. 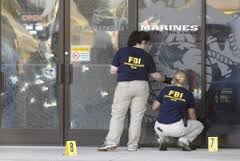 The suspected gunman started spraying bullets at the glass doors of a strip mall military recruiting center around 10:45 a.m. ET, witnesses said. From there, he headed to another location more than seven miles away, an operational support center operated by the U.S. Navy. That's where the four victims and the gunman were killed, Reinhold said. At least three people were injured: a police officer, a Marine Corps recruiter and a sailor.

The police officer, who was injured when he was shot in the ankle, was treated at the hospital, Chattanooga Mayor Andy Berke said. Officer Dennis Pedigo was one of the first responders on the scene, a law enforcement source close to the investigation said.

The recruiter, who was wounded in the leg, was treated and released from the hospital, the U.S. Marines said. The sailor who was shot, whom a Pentagon official initially indicated was female but later said is male, is in "pretty serious condition" after surgery, the official said.

What was security situation?

The shooting left the city reeling and raised questions about the security at the military centers. "Today was a nightmare for the city of Chattanooga. ... We had someone viciously attack, at two different locations, people who proudly serve our country," Berke said.

Authorities haven't released details yet about where at the centers the victims were shot or how the gunman gained access. U.S. President Barack Obama said the FBI director had briefed him on the shootings.

"We take all shootings very seriously. Obviously when you have an attack on a U.S. military facility, then we have to make sure that we have all the information necessary to make an assessment in terms of how this attack took place and what further precautions we can take in the future," he said, vowing that the investigation would be "thorough and prompt." Homeland Security Secretary Jeh Johnson said authorities were stepping up security at "certain federal facilities, out of an abundance of caution" after the shootings.

'It was very loud and very fast', April Grimmett said she was working at a hair salon near the recruiting center when she looked out a window and saw a man ducking in between cars. "Shortly after that, we heard the (shots). It was very loud and very fast," she said. A photo that she took shows glass doors damaged by the gunfire. "I could not believe how many bullet holes were in that door. It was insane," she said.

Gina Mule, a server at a restaurant, said she saw a man who'd been in a silver convertible Mustang, firing a "high-powered rifle" at the recruiting offices at about 10:50 a.m. First, she heard "Pow, pow, pow!" Then, she went to a window and saw the man firing. "He never got out of the car," she said. "He had a big, huge, high-powered rifle, and he was unloading shots right into the recruiters."

GEORGIA: Armed American civilians are now standing guard in front of Military Recruitment Centers; This is the America we know and love. Hopefully, armed citizens all over the country will come out to guard their military recruitment centers until our so-called ‘leaders’ do something to change this policy of forcing Americans in uniform to be sitting ducks on American soil. How sad that it has had to come to this.

The morning after a deadly attack on two military centers in Chattanooga, residents in Hiram are standing watch outside the local recruiting office with their personal firearms. It is their unique way of honoring the fallen Marines and they said to protect the lives of those who serve in the military.

“I teared up. I think any human being would be touched by what happened yesterday. Any U.S. citizen that has a heart and a soul to hear what had happened,” said Crystal Tewellow, who organized the watch.

Recruiting offices are designated as being “gun-free zones” which means officers working there cannot carry their sidearm into the building. Tewellow, whose son just enlisted and the army and has a brother who is a recruiter, felt compelled to organize the watch.

Nathalie Pozo was at the recruitment center on Friday morning and reported that about 30 people answered the call to arms. “This is who is fighting for us,” said Tewellow. “This is who is giving us our freedom, who allows us to wake every day and if they’re not here, and is taken down just like the Chattanooga incident, then how can we say that we are going to be able to wake up tomorrow?”


More people are expected to show up throughout the day. Twellow said they are trying to have at least one person standing vigil every hour.
Posted by Hla Oo at 9:37 PM