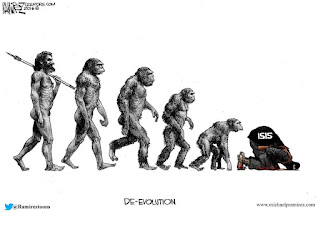 Titled “De-evolution,” the image by Michael Ramirez parodied the iconic “March of Progress” illustration (below), which shows human evolution as a series of figures evolving from apelike ancestors to modern humans standing erect. Ramirez’s work reverses the order, starting with a modern human and ending with the most devolved figure: a man lying prostrate as if in prayer, labeled with the word “ISIS.”

“It makes it as if ISIS is just your average, mainstream Muslim who’s prostrating in prayer  – something we all do – as opposed to what is unique and problematic about them,” said Ahmed Rehab of designated terrorist group CAIR (Council on American Islamic Relations).

(Actually, ISIS ‘is’ just your average Muslim. All Muslims prostate themselves the same way, all Muslims follow the same holy book, all Muslims share common beliefs. The ONLY difference is that ISIS believers are better Muslims because they carry out more of the violence/terrorism called for in the quran)


Rehab penned his concerns in a  letter that ran in Tuesday’s Chicago Tribune. “The cartoon does a great disservice to Muslims and promotes further Islamophobia,” wrote Mohammed Kaiseruddin, chairman, Council of Islamic Organizations of Greater Chicago, in another letter to the paper. (One can only hope!)


With the Charlie Hebdo attacks in mind, the frightened weenies at the Chicago Tribune quickly removed the cartoon from its website. “We understand the deep concerns about Michael Ramirez’ cartoon and have moved quickly to publish responses from Islamic leaders and other readers that reflect those concerns,” said John McCormick, Editorial Page Editor at the Chicago Tribune. (Too late, the cartoon will live in infamy on the internet)


Letter: A Tribune cartoon does a disservice to Muslims

The man shown prostrating (in a Michael Ramirez cartoon published in Saturday’s Tribune) is not a depiction of ISIS, so the cartoonist had to write ISIS on his clothes. Had the cartoonist worked with a picture that does depict ISIS — for example,the beheading of James Foley — he wouldn't need an identification.

The cartoon, instead, maligns 1.6 billion Muslims around the world by associating ISIS with a praying Muslim and by associating prostration with the most degraded condition of a human being. The position of prostration is well known as the position of Muslim prayer. Muslims readily put their head down on the ground in front of their creator. Muslims regard that as a position that brings them closest to God. Muslims take that position not just in designated worships but also when they seek something special from God. The cartoon does a great disservice to Muslims and promotes further Islamophobia.

Had the cartoonist chosen another depiction of human in the degraded position and associated ISIS with it, most Muslims would have no problems with it and would applaud it. We hope that this erroneous cartoon by an experienced and decorated cartoonist does not reflect his own bias against Islam and Muslims. 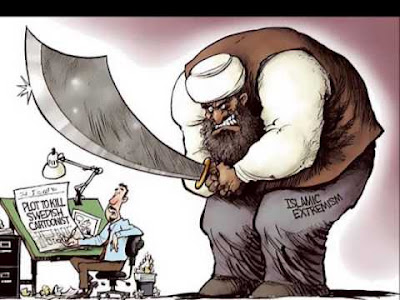