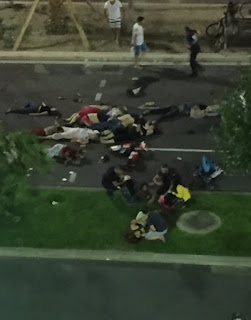 At least 80 people including 10 children have been killed and more than 150 injured after a 25-tonne lorry mowed down crowds for more than a mile before the driver got out and sprayed fleeing revellers with bullets as terror struck Bastille Day celebrations on the French Riviera. One eyewitness described seeing 'bodies flying like bowling pins' and 'hearing noises, cries that I will never forget' as the horror unfolded on a busy promenade in the southern city of Nice at around 10.30pm local time last night.

Identity documents belonging to a 31-year-old French Tunisian Muslim man, Mohamad Lahouaiej Bouhlel, were later found in the bullet-riddled truck after the gunman at the wheel was shot dead by police marksmen, security sources said. The source added: 'The identification of the truck driver is still underway.' The recovered papers indicate the man is a resident of Nice.

The truck driver was said to have shouted 'Allahu Akbar' – God is greatest – before being killed. Pro-ISIS groups have been celebrating the attack, orchestrated to coincide with France's most important national holiday, but as yet the terror group has not officially claimed responsibility.


A huge cache of guns, grenades and 'larger weapons' were later found inside the lorry, which mounted the pavement at approximately 40mph and steered directly towards hundreds of people watching a fireworks display. Around 100 revellers are then said to have dived into the sea as panic ensued and holiday crowds desperately ran for their lives.

Anti-terror police swooped in as the city was put on lockdown and residents were warned to stay indoors for their safety. Addressing the nation, French President Francois Hollande said several children were among the dead, with 80 victims confirmed so far and a further 20 people gravely wounded. He added that it was 'undeniable' the massacre was a terrorist attack.

Eyewitnesses say there was an exchange of gunfire in the aftermath of the incident before the driver was shot dead. ISIS has claimed responsibility for the attack, according to unconfirmed reports in the French media.

One witness called Antoine said: 'We were at the Neptune beach and a firework display had just finished. That is when we saw a white lorry. It was going quickly at 60-70 kilometres an hour.' The gunman jumped out of the truck after ploughing through the pedestrians and began opening fire, witnesses said. Officials said the driver was shot dead near the scene. A second suspect is thought to be on the run.

Eyewitness Wassim Bouhlel said that he saw a truck drive into the crowd and then witnessed the man emerge with a gun and start shooting. 'There was carnage on the road,' Bouhlel said. 'Bodies everywhere.'

Anti terrorist police have taken over the investigation into the attack according to the French interior ministry. France's ambassador to the United States, Gerard Araud, said last night's incident was a 'terrorist attack'. Addressing a Bastille Day reception in Washington, Araud said: 'Our democracies - France, the United States, our other partners , we are besieged, we face a terrible threat.'

As a result of last night's attack, France has extended the state of emergency in the country for a further three months. French Interior minister Bernard Cazeneuve said: 'We are in a war with terrorists who want to strike us at any price and in a very violent way.' Several children are among the dead while a further 20 people are gravely injured. 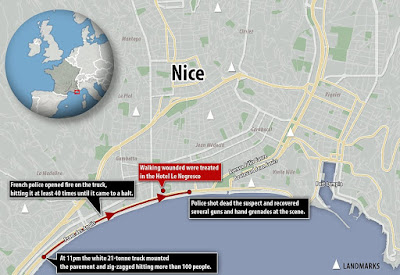 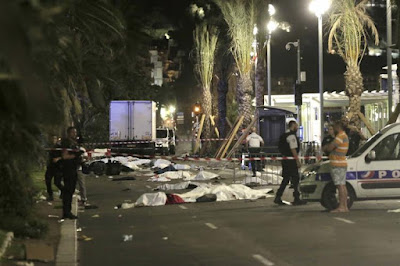 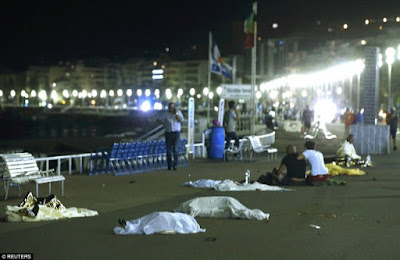 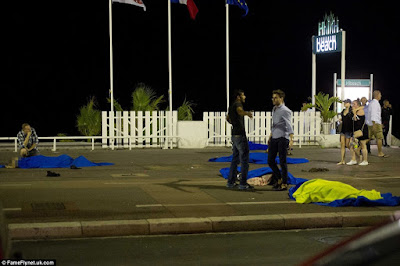 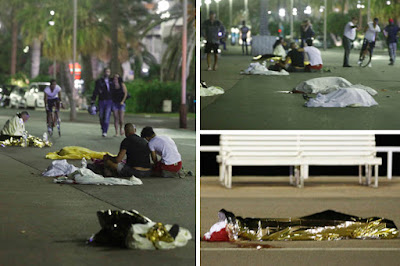 How did the attack unfold?

The large white truck plunged into the crowd at around 11:00pm (2100 GMT) Thursday night as hundreds of people were on Nice's beachfront Promenade des Anglais to watch the fireworks for France's national day.

The attacker has been shot dead, the government said. He is yet to be identified. Was this a jihadist attack? The attack has not been claimed by any group, but prosecutors say the probe will be handled by anti-terrorism investigators. 'Investigations are currently underway to establish if the individual acted alone or if he had accomplices who might have fled,' Brandet said.

The attack comes with France under a state of emergency following the Islamic State attacks in Paris in November that left 130 people dead.

In December 2014, two men ploughed their cars into pedestrians in two days - separate incidents that left France reeling. The first driver shouted 'Allahu Akbar' (God is greatest) as he drove into people in the eastern city of Dijon, injuring 13. The 40-year-old driver had a long history of mental illness, and no ties to jihadist groups, the government said.

A day later, a man rammed a white van into a Christmas market in the western city of Nantes, killing one person and injuring nine others. He then stabbed himself several times. Prosecutors said a notebook was found in his vehicle in which he spoke of his 'hatred for society' and said he feared 'being killed by secret agents'. The man committed suicide in his prison cell in 2016 while awaiting trial. 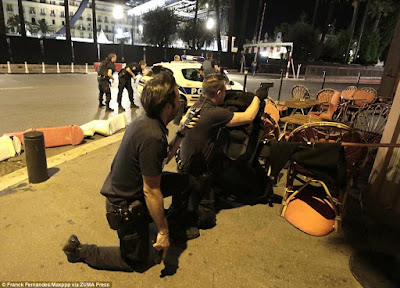 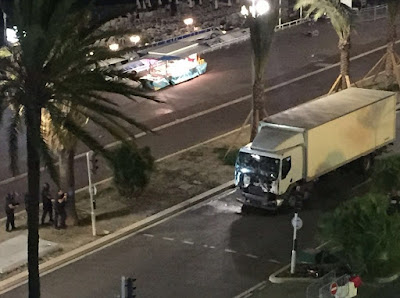 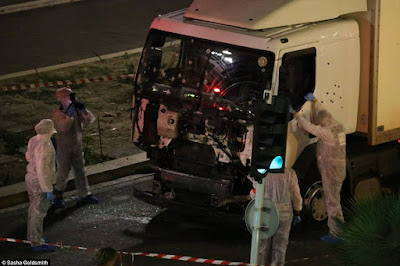 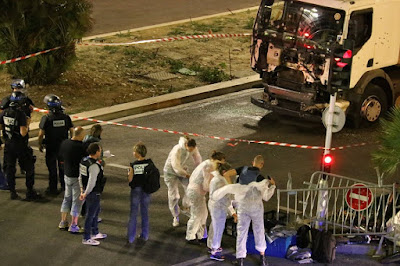 What do we know about the suspect?

French police have confirmed they have found identity documents in the truck belonging to a French Tunisian man. The identity documents belong to a 31-year-old man. However, they have not yet identified the dead man who was shot dead by police at the scene. Officers fired at least 40 rounds into the truck.

Interior Ministry spokesman Pierre-Henry Brandet gave an update on the rapidly developing situation. He said: 'There is no hostage-taking. An individual drove a truck into the crowd. He was killed by police. Investigations are currently under way to establish if the individual acted alone or if he had accomplices who might have fled.'

Local politician Eric Ciotti said: 'It's a scene of horror.' He confirmed the truck mowed down 'several hundred people'. He said the truck drove for more than a mile hitting people along the promenade. Mr Ciotti confirmed the driver was killed by police 'apparently after an exchange of gunfire'. The truck was riddled with at least 40 bullet holes. The front of the vehicle was badly damaged while the front tyres had been shot out.

Bastille Day marks the July 14, 1789, storming of the Bastille prison by angry Paris crowds that helped spark the French Revolution. The uprising was organised by ordinary Parisians intent on making clear they would no longer accept the absolute power of King Louis XVI's as they faced high taxes and extortionate food costs.

There were not many prisoners in the Bastille at the time of the storming - only 7 people were freed - but the point was made. That very night, 800 men destroyed the Bastille. What happened that day began the French Revolution, in turn bringing about the modern French Republic.

The July 14 'Fête de la Fédération' - which marked the first anniversary of the storming of the Bastille - became a French national holiday in 1880 and has been observed ever since. The day itself is celebrated passionately across France, with events held throughout the country on what is now a bank holiday.

Weeks later, the National Assembly abolished feudalism and adopted the Declaration of the Rights of Man and of the Citizen as its constitution. France became united under the agreement: 'Men are born free and remain free and equal in rights.' Months on both Louis XVI and Queen Marie Antoinette were executed.