(Gregory Martin’s article from The MISES INSTITUTE on 01 December 2018.)

San Francisco's Wealthy Leftists Are Making Homelessness Worse: I recently had the opportunity to visit San Francisco for the first time. Coastal towns tend to be a bit more interesting in terms of cuisine (seafood being one of the more varied palate options) as well as architecture (steep hill structures are ever a testament to human ingenuity) and San Francisco scores high in both categories.

However one area where it currently scores quite low is in the aroma zone. At first I thought perhaps they had a very inefficient sewer system near the shoreline retail sector, but as we explored deeper toward the city center it became clear something was amiss. I learned shortly thereafter that San Francisco has a poop crisis.

To be blunt — people are literally crapping on the sidewalks. Not the tourists, mind you, but the local homeless population. The situation has come to a head (or to the head to employ a nautical metaphor) primarily as a result of progressive conservatism primed with the power of centralized (governmental) authority.


The outside leftist narrative of course is that this poop crisis is inevitable results of unmitigated capitalism, which drives the eternal boogeyman of income inequality. This inequality fuels gentrification of the San Francisco housing market (no, actually property taxes are the prime driver of gentrification — if you own your home absent property tax you would never need to sell due to rising prices).

So as housing becomes ever more “unaffordable” people are forced out of their homes and onto the street. This is of course complete nonsense. Prices only go up if supply is constrained while demand is rising. So in order to discover why supply is constrained we turn our attention toward the “inside” leftists (that is, the progressive liberals who live there).

It turns out those that live there are in fact quite conservative (even if they don’t realize it). Any attempted new housing project must pass not only governmental hurdles but also the “local input” of current residents.

These residents walk and talk like social progressives but because one of their core tenets is that they do not want the flavor, character, or architecture of the area in which they live to change — that is, they want to conserve it in perpetuity — this by definition makes them conservatives in that arena.

Their dual desire to not only keep San Francisco locked in an eternal snow globe style stasis but to also not erode the value of their homes drives them to engage in this very destructive economic protectionism: keeping newcomers out by making it virtually impossible (or more costly than necessary) to build, keeps the value of their own homes artificially elevated while preserving the Norman Rockwell character of their town.

To fully appreciate the extent of the damage they are causing and why perhaps more than anywhere else in the country the homeless problem is so acute is that the median price of a modest single family home now stands at $1.6 million. A family of four with a household income of $100k is considered at the poverty line and actually qualifies for assistance from HUD (let that sink in — taxpayers across the country are subsidizing the housing of people making a $100k/year).

So what is the solution? Always the same and likewise always decried as “unrealistic” — remove all housing regulations and obstacles and let anyone build anything anywhere (works just fine in Houston, Texas, thank you very much). Your neighbor has no right to say what you can do with your property. Progressives (yes, I’m looking at you “townies” in Athens, Georgia) should stop blocking progress when it comes to housing and development.

(Gregory Morin is CEO of Seachem Laboratories, Inc., in Madison, Georgia.  He holds a Ph.D. in Chemistry from the University of Notre Dame, and has over 16 years experience working at the intersection of the entrepreneurship/business world and the regulatory world.)

San Francisco is declared The Street Poop Capital of USA

San Francisco is declared street poop capital of America by company that has made a map of feces: The Californian city was far worse than competitors New York and Chicago for both human and dog poop complaints in the past year.

San Francisco might be the one of the most expensive place to live in the world but it has recently acquired a new, slightly less esteemed honor - the feces capital of America. A new study by the real estate listing website RealtyHop declares the California tech-hub to be the worst place in the US for 'poop sightings', with ten times as many as New York and 20 times more than Chicago in 2017.

According to the study compiled from publicly available 311 data, there were 21,000 incidents of feces complaints last year, which is an average of 456 per each of San Francisco's 47 square miles.

2017 was San Francisco's worst year so far for feces complaints, but it looks as though 2018 will be muckier still, with more than 16,000 calls so far.  In fact, the number of complaints received by the city has risen every year since 2011 - and has almost tripled annually since then - so the problem has been getting worse for some time.

The 311 now receive 65 complaints every single day about feces, both dog and human, on sidewalks. RealtyHop reported than unlike in Chicago and New York, the neighborhoods further out see fewer complaints than those in the centre (except for Golden Gate Park).

There was also no correlation between median home value and feces, nor when comparing homeownership with complaints by neighborhood. Like the others cities howeer, San Francisco residents mostly pick up the phone to complain on Mondays, closely followed by Tuesdays, and seem far more relaxed about it on the weekends.

Clearly feeling that the story lacked a visual element, they also created an interactive brown and yellow map to show the neighborhoods of San Francisco with the highest concentration of reported feces.

The map shows that the city center was the dirtiest - with the SoMa area being the most complained about overall, and The Mission, Tenderloin, Portrero Hill and Hayes Valley following closely behind. The cleanest neighborhoods were Presidio Heights, Twin Peaks and Lakeshore.

To tackle to problem, San Francisco in August launched 'Poop Patrol' — a team of full-time Public Works staffers, armed with a steam cleaner, who patrol alleyways in San Francisco's poop-hotspots. 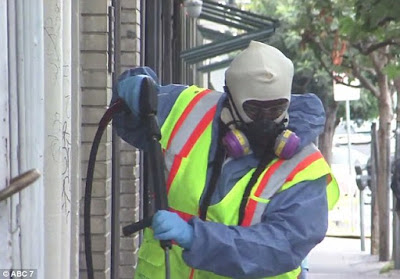 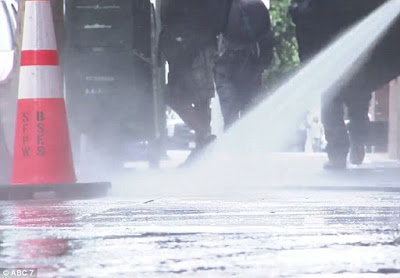 It is already illegal for dog owners not to pick up after their pets, but the city wants to spot and clean away the waste before the complaint comes in. 'We're trying to be proactive,' Public Works director Mohammed Nuru told The Chronicle. 'We're actually out there looking for it.'

'So, what happens is we're going to take one of those crews out and try to get ahead of those calls and look for these locations so that hopefully we can get less numbers of calls coming in,' he added.

Nuru said the vast majority is from the city's 120,000 dogs, but the growing homeless population is the city is also a contributing factor. The city's new mayor, London Breed, has earmarked $1.05 million for new public toilets and expanding the opening hours at five existing locations. The city only operates 22 toilets at the moment and most of them close overnight, leaving few options for those who are sleeping rough.

In April, then-Mayor Mark Farrell vowed to spend $750,000 hiring more people to pick up needles and $13 million over the next two years for more heavy duty steam cleaners and pit stop toilets. 'The trash, our homeless, the needles, the drug abuse on our streets, I've seen it all in our city and it's gotten to the point where we need to really change course,' Farrell said at the time.

Just a 15 minute walk from the headquarters of wealthy tech-giants Twitter and Uber in the Tenderloin neighborhood is one of San Francisco's worst-kept streets. Heroin needles and excrement cover Hyde Street, which hosts an open-air narcotics market in broad daylight.

The excrement problem is especially bad here. 'Some parts of the Tenderloin, you're walking, and you smell it and you have to hold your breath,' said Yolanda Warren, a receptionist who works around the corner from Hyde Street. A New York Times report claims Hyde Street is the 'dirtiest block in the city.'

Adam Mesnick, who lives in the SoMa neighborhood and owns two deli shops there, said San Francisco is 'finally kind of melting down' and that leaders have routinely ignored dangerous street behavior for years. 'I cannot have my family down here, I can't have visitors. I can, but I don't choose to, have my nieces come here,' he said. 'It's horrifying for my family to walk down the street here.'

The city's logged more than 24,300 requests last year for human waste cleanup and 9,500 for needle pick-up. This year, there already have been more than 8,300 requests to pick up waste and 3,700 for needles. San Francisco has budgeted $65 million out of a $10 billion citywide budget for street cleaning this year. 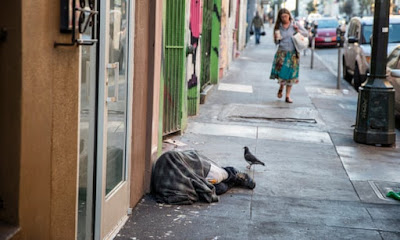