Senior General Min Aung Hlaing the famous chief of Burmese Army and my dear childhood friend had been using Facebook effectively for many years till the bloody Facebook unfairly closed his account early this year due to the relentless pressure from the OIC-Muslims-controlled UN, and EU.

Since then I’ve been wondering what his response would be? Ban the Facebook, or hack the Facebook since he has the whole Russian-trained Cyber Warrior Team equipped with latest Chinese softwares and hardware from Huawei and ZTE! But as a very successful strategy-driven combat warrior he chooses the best available and cheapest option, starting his own WWW site, https://www.seniorgeneralminaunghlaing.com.mm, bravo.

I didn't even know the existence of his site till one Indian naval officer I know for many years when I was living in New York City sent me an email of Burma Navy 71st Anniversary news from his site this morning.

So if you really want to read news about the Burmese Army just hear it direct from the horse’s mouth by going direct to his site and read it both in English and Burmese. Good on you Min Aung Hlaing for standing up for us Burmese and our nation Burma. Fuck the OIC Muslims, Fuck the UN, and Fuck the EU.

(Followings are the samples of Burmese military news from his site.)

The Tatmadaw (Navy) founded on 24 December 1947 has reached its 71st Anni-versary. The ceremony to commission the naval vessels of the Tatmadaw (Navy) to upgrade its naval power and to turn it into a Regional Blue Water Navy was held on its 71st Founding Anniversary at No 3 Naval Wharf in Yangon, graced by Commander-in-Chief of Defence Services Senior General Min Aung Hlaing who delivered an address.

First, Chief of Staff (Navy) Rear-Admiral Moe Aung explained the salient points of the naval vessels. The Commander of Naval Dockyard Command Headquarters handed over the papers of the naval vessels to the commander of the Naval Fleet. Then, the Commander-in-Chief (Navy) presented the scale model of the vessels to Senior General Min Aung Hlaing as gifts of honour in commemoration of the commissioning ceremony. 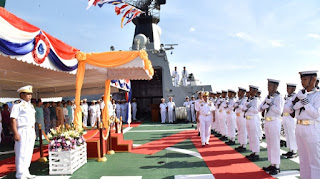 Then, the Commander-in-Chief (Navy) presented the shell of the first fired gun salute to the Senior General as a commemorative gift. The Senior General presented gifts of honour to the officers and other ranks of the ships that took part in the naval show and the commissioned ships through the officials. Then certificates of honour and cash awards were presented to officers and other ranks who took part in building the commissioned ships through Commander of Naval Dockyard Command Headquaters Rear-Admiral Thant Zin Lay.

In his address the Senior General said seven ships were commissioned at the today’s ceremony, and the commissioning of the 65-metre Floating Dock (Saya Shan-2), an essential vessel of the Navy is significant. As vessels from naval commands from far distance areas can be repaired at the floating dock, it will have benefits such as saving time, cutting expenditure and ensuring convenient process of tasks.

As doing so, the Senior General praised officers and other ranks from Naval Dockyard Command Headquarters for their efforts in construction tasks. The naval dockyard could build various vessels including frigates. Hence, the Tatmadaw (Navy) can take pride of cutting expenditure of the State. The Senior General stressed the need to continue construction of war vessels with higher quality and better capability. 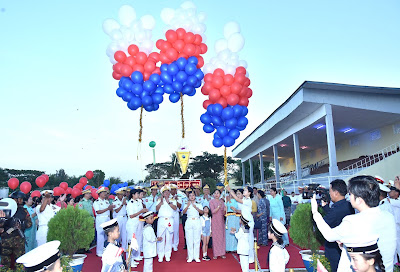 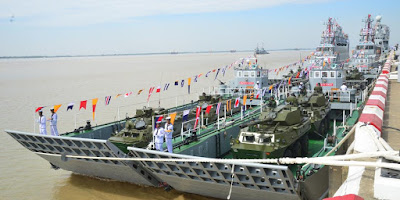 Servicewomen (officers) are being turned out continuously to be able to take part in the defence duty of the Republic of the Union of Myanmar, and the passing out parade of the 5th Intake of the Graduate Female Cadets was held at the parade ground of the Defence Services (Army) Officers Training School (Hmawby) in Yangon this morning. Commander-in-Chief of Defence Services Senior General Maha Thray Sithu Min Aung Hlaing attended the ceremony and delivered an address.

In his address, the Senior General dealt with the nurturing of servicewomen in the Tatmadaw, saying the role of women has been broadening globally, and there are brilliant women intellectuals as well as women who are taking the top positions in the politics and governments. The UN and the international forums are discussing the enhancement of the role of women, and Myanmar has been giving priority to the task. The role of women in the global armed forces is also developing significantly, and they are shouldering important duties. 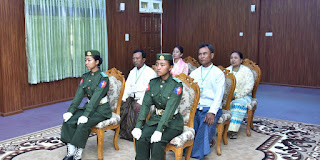 The Tatmadaw with the aim of producing servicewomen (officers) to enable servicewomen to take part in the national defence duty is conducting military courses for women including the female cadets’ course. If the abilities of women in the history of the Tatmadaw are studied, the record of Myanmar patriotic forces including women daringly fighting back the British troops in the Battle of Wethtikan during the First Anglo-Myanmar War can be found.

After the independence was restored in 1948, servicewomen were assigned as officers and other ranks in the corps and rescue units. The Tatmadaw has been producing graduate women officers again and assigning them duties to uplift the role of servicewomen. Of the women officers, six were successively trained as the first women pilots of the Tatmadaw (Air).

They are now standing shoulder to shoulder with the male counterparts in serving as air force pilots. After gaining more experience, they will be trained to fly fighters and jet aircraft. In the ASEAN shooting contests, servicewomen win gold medals annually. The qualifications of servicewomen have reached that level.

As regards the national defence duties and regional development undertakings of the Tatmadaw, the Senior General said Tatmadaw members should brilliantly serve their duties to safeguard the State and the people, with determination and the sacrificing spirit. The Tatmadaw is only defending against those attempting to harm State peace and stability, government machinery and lives and property of the people and danger of armed groups.

You are required to help local people in the areas where you are assigned as much as you can to develop their socio-economy and their own regions. You also need to help with rescue work on a timely basis in times of natural disaster and other regional welfare tasks such as education and health affairs. 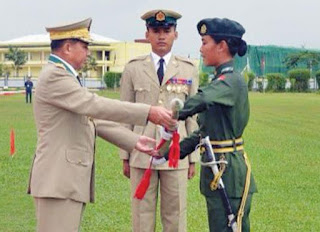 Speaking about unity within the military unit, the Senior General said: Unity within a military unit must be forged by considering and reviewing instigation and various attacks on the Tatmadaw. In the insurgents’ attacks on military regiments and headquarters, the ability of soldiers and their families to fight back is a good example of unity. Proudly, I want to say that our Tatmadaw is formed with not only nationalistic, patriotic and brave soldiers but also their wives as a major auxiliary force for the sake of our country.

As for achieving eternal peace by ending internal armed conflict, the Senior General said: Since regaining independence in 1948, Myanmar has been trying to end ethnic armed struggle stemming from different ideologies and ethnic issues. Peace offer was made for ethnic armed groups because ideological differences and misconceptions in ethnic affairs must be resolved within the framework of law only.

The Tatmadaw has announced a cessation of military operations until 30 April 2019, so ethnic armed groups need to participate in the peace process if they accept democracy and national development through national unity and solidarity. The Tatmadaw for its part will be render necessary help. With armed conflict and instability, Myanmar cannot strive its utmost to develop and has lagged behind even in the ASEAN community.

To catch up with other countries, we have to take many steps forward while another takes only a step forward. In this context, we need to be united in working for the development of our country by cultivating ‘Myanmar spirit’ without regional, racial or religious discrimination. At a time when efforts are being made for peace and development of our country, you must do your bit. I want to urge you not to tarnish the national goal and the Tatmadaw’s image because of your own behaviours or words. 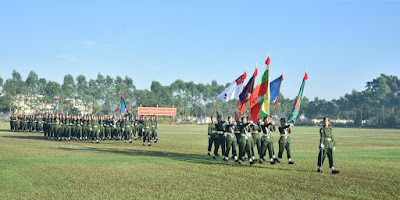 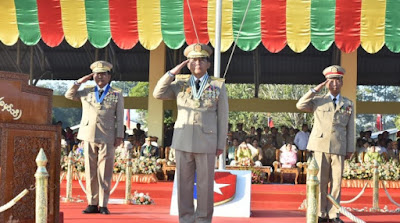