Protesters In Iran Refusing To Trample US Flags

(John Hayward's article from the BREITBART NEWS on 13 January 2020.) 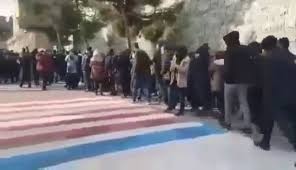 A video clip highlighted on Sunday by U.N. Watch, a non-governmental organization based in Switzerland, showed students at Iran’s Tehran University refusing to trample on American and Israeli flags as directed by agents of the Basij, a paramilitary force controlled by Iran’s Islamic Revolutionary Guard Corps (IRGC).

UN Watch tweeted: "Students in Tehran University take pains to avoid walking on the flags of U.S. & Israel—as the regime forces people to do—and when two Basiji regime agents then make a point of trampling the flags, the crowds shout "Besharaf!" — the regime is shameless, dishonorable."

In the video, only a handful of Iranian regime agents were willing to walk on the flags. The students responded by heckling them as “dishonorable” and “shameless.” Other video clips of the incident illustrated how much care the students took to avoid stepping on the flags.


President Donald Trump approvingly commented on the trend Monday morning, hailing it as a sign of “big progress” in Iran and tweeted: "Wow! The wonderful Iranian protesters refused to step on, or in any way denigrate, our Great American Flag. It was put on the street in order for them to trample it, and they walked around it instead. Big progress!"

Some of the responses to Trump’s tweet from Iranians indicated that many of them have always been uncomfortable with disrespecting the flags of other countries and resented the regime for forcing them to deface American and Israeli flags. The rulers of Tehran have placed American flags on the ground in front of building entrances for many years to get their people accustomed to walking on the flag.

"These courageous Iranian students who refuse to trample the U.S. and Israeli flags represent the hope for a better Middle East. Engage with and promote them instead of their oppressors, and maybe Iran-backed wars and terror across the region will end," UN Watch executive director Hillel Neuer said of the video posted by his organization.


H.A. Heller of the London-based Royal United Services Institute told NBC News he doubted the Iranians were signaling any great affection or respect for the United States or Israel by refusing to step on the flags. Instead, he said it was their way of telling the regime they “aren’t interested in deflection” from their government’s culpability for shooting down a Ukrainian passenger jet last week.

This would not explain why the Iranian people are enthusiastically defacing and destroying photos of slain Islamic Revolutionary Guard Corps (IRGC) Quds Force leader Qasem Soleimani, hailed by U.S. media as a “revered military leader” whose death in a U.S. airstrike was certain to unite Iranians in shared hatred of America.

Asaad Hanna tweeted: "The brave protestors in #Tahran kicking and ripping off the posters of Soleimani in the streets tonight."

"Another video shows Iranians tearing down a Soleimani poster. You know why? 78 people killed in a stampede at his funeral, 178 people killed in exacting his revenge by downing the Ukrainian plane, and 1500 killed by the IRGC in protests. People are furious when you call him a hero," one Iranian said online. 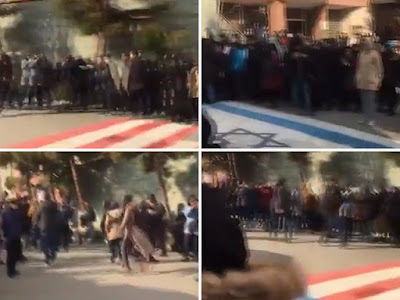 Pelosi Suggests Iran Protesters Are Against The US

Appearing Sunday on ABC’s This Week, House Speaker Nancy Pelosi (D-CA) downplayed Iranians’ dissatisfaction with their national leaders, suggesting that protesters were on the streets for diverse reasons, including support for slain terror-military commander Qasem Soleimani. A partial transcript is as follows:

GEORGE STEPHANOPOULOS: The question is how we get there. We’re seeing now demonstrations in the streets of Iran against the regime. Do you support those protesters and would it be a good thing if they brought the regime down?
HOUSE SPEAKER NANCY PELOSI: Well, the regime — the protesters are — are protesting, as I understand it, this brand of protesters, about the fact that that plane went down. And many students were on that plane. And these are largely students in the street. I think the Iranians should have not had commercial flights going off when there was—

STEPHANOPOULOS: They’re calling out the regime for lying. They’re saying death to Khomeini as well.
SPEAKER PELOSI: Yes. Well, whatever it is. But the fact is this, the — there were protesters in the streets before against the regime. After the taking out of Soleimani, there were protesters in the street, joined together, as you know, against us. That wasn’t good. Taking down this plane is a terrible, terrible tragedy. And they should be held accountable for letting commercial flights go at a time that was so, so dangerous. But there are different reasons why people are in the street. Of course, we would love to see the aspirations of the people of Iran realized with a better situation there, but escalating the situation — unless we’ve exhausted every other remedy — 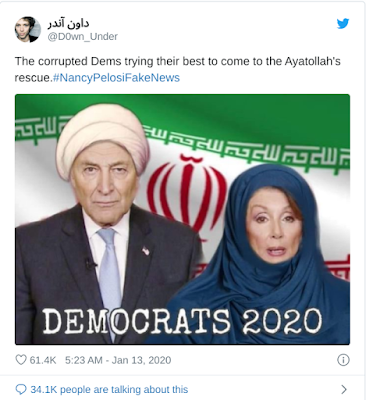