Why Was Monsoon's Withdrawal Delayed In India?

(Staff article from the WEATHER CHANNEL on 07 October 2019.) 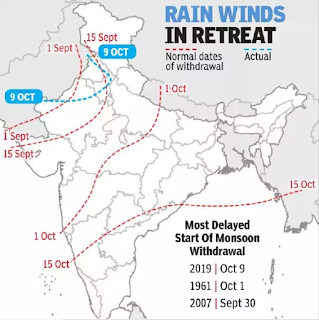 A few days ago, the India Meteorological Department (IMD) said that the withdrawal of the southwest monsoon is expected to begin after October 10th.

This makes it the most delayed monsoon withdrawal of all time. The last time something similar occurred was in 1961, when the monsoon began withdrawing from October 1.

So why did the monsoon's retreat get so delayed and what does it mean for the upcoming Northeast Monsoon season, whose arrival is being eagerly awaited by Tamil Nadu and other states? The Weather Channel answers some common questions.

The withdrawal of the monsoon begins with the development of a high-pressure area over northwest India. High-pressure zones represent settled weather and low wind movement, whereas intense low-pressure zones attract moisture-bearing winds and therefore host weather disturbances like rains, thunderstorms or lightning.


This year, the presence of multiple low-pressure weather systems over the subcontinent, especially northern and western India, prevented the timely formation of high pressure (i.e. anticyclonic) conditions essential for the rains' withdrawal. As on Sunday, October 6, multiple such low-pressure systems are seen over India—Western Disturbances that have brought snow to parts of Himachal Pradesh recently, upper-air circulations over Odisha and Uttar Pradesh, two separate troughs, and lines of wind discontinuity.

Rajesh Kapadia, founder of amateur meteorology blog Vagaries.in, says, "Due to these multiple systems, the Inter-Tropical Convergence Zone or ITCZ (known as the monsoon trough in our subcontinent) is unable to move southwards and anticyclonic conditions are not able to set in."

In fact, these systems have played spoiler since late September. Akshay Deoras, an independent meteorologist based in the UK, had told TWC earlier that "the system that triggered (the Arabian Sea Cyclone) Hikka was a spoiler, since the anticyclone was getting established over Western India." Hikka was declared a Cyclone by authorities on September 23, and eventually veered away towards Oman.

The IMD expects the anticyclone to form only around October 6—a month later than usual, and the withdrawal of monsoon will begin a few days later, around October 10.

How has this delay affected the weather in Northwest India?

According to the IMD, North and Western Indian states have collectively received 160% excess rainfall in the period from October 1 to October 6, 2019. In Rajasthan alone, the excess rain has been over 4 times the normal. This is indicative of the lingering low-pressure that has delayed the monsoon's withdrawal.

What prompts the withdrawal of the monsoon every year?

The monsoon starts withdrawing from September 1, with the changeover from cyclonic to anticyclonic conditions. This change is caused by the Earth's rotation and the relative position of the Sun.

In a nutshell, during our summer, the ITCZ, a low-pressure belt of converging, rising winds that keeps moving based on the Sun's relative position with the Earth, moves to India's north. As mentioned earlier, the ITCZ is known in India as the monsoon trough, as it draws in ocean winds and causes rains over the region from June-September.

However, in September, the monsoon trough begins moving towards southwards. The lack of direct sunlight and the departure of the trough leaves our region cooler and drier than during the June-September phase.

At the time of writing this, the monsoon trough stretches across India from North Kutch (Gujarat) to Jharkhand across Central India, says Kapadia. As the anticyclone forms and the monsoon axis shifts downwards, the low pressure systems should die down, says Kapadia, adding that he expects this to happen by around October 9. 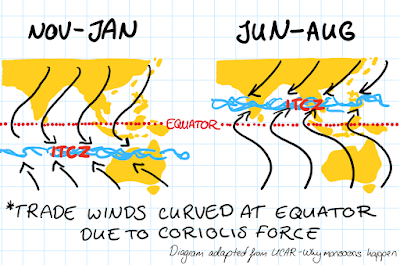 So what impact will the delayed monsoon retreat have on the Northeast Monsoon?

The Northeast Monsoon (NEM) is a weather system that provides Tamil Nadu nearly half of its annual rainfall and also causes rains in Puducherry, Andhra Pradesh, interior Karnataka, Kerala and Sri Lanka from October to December every year.

The NEM occurs when northern India starts to cool off, while the south is relatively warmer, because of the southward movement of the Sun's radiation. This prompts winds from the Himalayas and Indo-Gangetic plain to move towards southern and eastern India. Aided by moisture from the Bay of Bengal, these winds shed rainfall over parts of southern India.

Last year, the below-par Northeast Monsoon rainfall over Tamil Nadu (where the statewide shortfall was around 24%) and Chennai (which got 55% less rains than normal) spawned a water crisis in the capital city. This year, due to the delayed withdrawal of the Southwest Monsoon, the NEM may begin in the third week of October.

In terms of rainfall volume, The Weather Company’s long-range forecast suggests that overall rainfall from October-December may be 95% to 100% of the long-period average for Tamil Nadu. An official NEM forecast from the IMD is still awaited.

What is the state of rainfall over southern India since October 1?

The NEM, which officially begins October 1, is yet to make its appearance. Hence, Tamil Nadu received 55% deficit rain between October 1-6, compared to the long-term average for the same period, while Andhra Pradesh, Telangana and Kerala have received around 30% below-average rainfall. However, the week after October 10 may see some changes in these numbers, so keep watching the skies, and keep checking back with The Weather Channel for more updates.

In early 1961, a series of bushfires burned in the south-west region of Western Australia. The devastating fires burned large areas of forest in and around Dwellingup from 20 to 24 January, at Pemberton and in the Shannon River region between 11 and 15 February, and in the Augusta-Margaret River area in early March.

There were also major fires which burned in the Darling Scarp around Kalamunda. The towns of Dwellingup and Karridale were largely destroyed by the fires, as were a number of smaller railway and mill settlements. There was no loss of human life.

Whilst the 1960 rainy season over the affected region had not been excessively dry, rainfall had been below average over the region affected by the fires ever since August of that year - thus the forests were perhaps even drier than they would normally be by January.

However, the underlying cause of the Dwellingup fires lay far to the north in the Pilbara, where a tropical cyclone had formed on 15 January northeast of Darwin had followed a trajectory along the north west Western Australian coast and intensified north east of Onslow and then moved steadily southwards, hitting that town on 24–25 January while having a central pressure of 920 hPa.

Hurricane-force winds demolished several buildings and storm surge inundated the town with 1.8 metres water. With a strong high pressure system to the east of the cyclone remaining almost stationary for some days, hot north-easterly winds developed and became so intense that by the 20th maximum temperatures throughout the south west were uniformly above 40 °C (104 °F) and remained at that level for the following five days.

During this period, as the cyclone moved slowly along the coast it drenched Onslow and the neighbouring district, but only dry thunderstorms occurred in the south-west, which started fires that spread extremely rapidly in the hot, windy conditions. 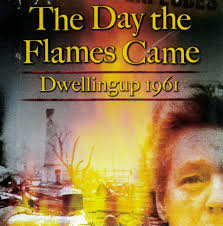 The first fires were reported from Dwellingup, 110 kilometres (68 mi) south of Perth, Western Australia on 19 January and the following day fires erupted in the timbered country of the Darling Scarp around Mundaring and Mount Helena. Although as the cyclone tracked down the west coast some rain came around 25 January to ease the fires, not all were fully extinguished.

Moreover, as the normal dry summer weather evaporated further moisture from the forests, when another severe cyclone hit Onslow on 12 February it caused even stronger winds (sustained at up to 60 kilometres per hour (37 mph) with much stronger gusts) and as this cyclone moved inland, lost intensity and produced no rain in fire-affected areas, decaying bushfires were re-ignited.

The fire from Dwellingup consequently moved downslope toward the major town of Pinjarra where it burned a significant portion of the town's buildings—123 people were left homeless. As the forests surrounding began re-igniting, the entire population of a number of other mill towns was relocated to Dwellingup in the following days.

The fires continued to burn owing to the strong winds, and many tiny timber towns were completely burnt out - Holyoake, Nanga Brook, Marrinup and Banksiadale; and were never re-built.

The 2 March saw Onslow’s third cyclone in five weeks, which like the second did not produce any rain in the affected areas and led to temperatures reaching in Perth 100 °F (37.8 °C) on the first two days of March for the first time. Fires spread southward to Augusta-Margaret River Shire, though some in that area were thought to have been deliberately lit, and continued to rage within 25 kilometres of Perth city.

Although rain was predicted,  it did not eventuate. Despite the dryness of the cool change, an easing of the winds allowed fire fighters to finally bring the flames under control. However, in all it is estimated that the fires burned a total of 4,400 square kilometres (1,700 sq mi) of bushland, and property damage far exceeded this.

Following the fires, a Royal Commission was conducted to investigate causes and in following years many recommendations were made to improve controlled burning in the tall eucalypt forests of the south-west.

Related posts at following links:
Late Monsoons In India: Wild Bush Fires In Australia
Posted by Hla Oo at 1:44 AM