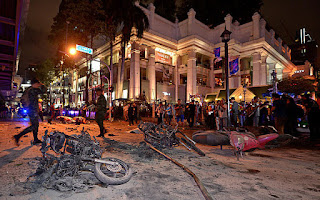 Bangkok, Thailand (CNN): A bomb explosion that appeared to target a popular Hindu shrine in central Bangkok killed at least 20 people Monday and wounded 123 more, authorities said. Twelve victims died at the scene, and the others died later at area hospitals, officials said.

Foreigners are among the casualties, said Maj Gen. Weerachon Sukhontapatipak, a Thai government spokesman. He had no specifics, but national police Chief Somyot Pumpanmuang said on state TV that Chinese tourists who had traveled to Thailand from the Philippines had been killed.


The Chinese Embassy in Bangkok later confirmed the report, telling China's state-run Xinhua that three nationals had died in the blast, while another 15 Chinese tourists were injured, some seriously. Hong Kong's Immigration Department reported that three residents were among the injured.

Bangkok on edge after violent blast

It's too early to say who orchestrated the attack, Somyot said. National Security Council spokesman Ned Price released a statement saying the United States would remain in close contact with authorities in Thailand as they investigate.

"The United States extends our deepest condolences to all of those affected by the explosion in Bangkok, Thailand. The United States condemns this deplorable act of violence, and our thoughts are with the victims, their families and loved ones, and the Thai emergency personnel responding to the incident," he said. 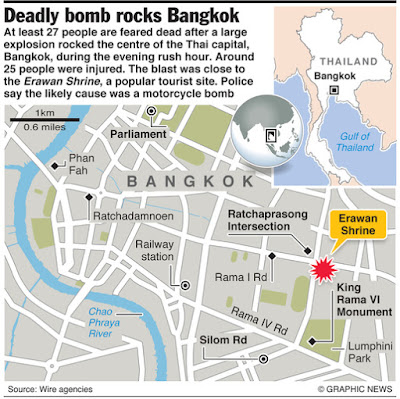 Suspicious items turn out to be garbage bags

Police initially sealed off the scene near the popular Erawan Shrine because, they said at the time, a second bomb in the area remained active and needed to be defused. Bomb squad members in blast suits responded, and an officer announced over a loudspeaker, "The situation is still not safe. Please all stay back. There might be another bomb in the area."

But Somyot said later the suspicious items were not bombs. "They are just garbage bags," he said. "Our (explosives) team is still working at the site, and we will close down the traffic around the area until noon tomorrow." 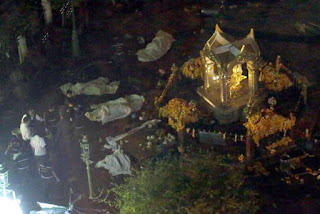 The bomb that ripped through the intersection -- a 3-kilogram "improvised device" -- was the only explosive found, police said. Steve Herman, a correspondent and bureau chief for Voice of America, said he thought it was thunder when the explosion first went off. He saw six bodies under sheets inside the shrine and one outside of it, Herman said.

Another reporter, The New York Times' Thomas Fuller, said body parts were scattered around the area. He estimated that several hundred military and police officials, some of them using dogs, were scouring the scene for more bombs.

Maj. Gen. Sirwara Rangsribhramnakul said security was being tightened throughout the city. Asked how many security forces had been deployed, he replied, "As much as we have." Somyot, the police chief, told Reuters the blast came from an "improvised device" on a motorcycle, according to the news wire's Bangkok correspondent, Amy Sawitta Lefevre. Police have not officially stated whether they believe the bomb had a specific target.

The Bangkok Post reported the bomb, which detonated just after 7 p.m., was fastened to a utility pole in front of the Erawan Shrine.

The blast didn't cause rampant panic, as some bystanders were milling around peacefully and a family apparently unaware of the explosion was enjoying a meal at a nearby McDonald's, freelance journalist Adam Ramsey said.

Schools are out, and many in the city were commuting home at the time of the blast, so the explosion at a busy intersection in a tourist area carried the potential for significant casualties. Along with hotels, there are numerous shopping centers in the area, Google Maps shows, including the Platinum Fashion Mall and Central World, reportedly one of the largest shopping malls in the world. The city's Skytrain rumbles nearly overhead.

The area was the target of another bombing in February when two explosive devices detonated near the entrance of a luxury shopping mall, Siam Paragon, 2013's most Instagrammed location in the world. The mall is just over a block away from the shrine. No one was injured in that blast.

Though Buddhism is the predominant religion in Thailand, there are many Hindu shrines in Bangkok, and the Erawan Shrine is the best known among them, according to an English-language website providing news and tourism information about the country.

Streams of people pay respects at the shrine from early morning until late at night. Thais and foreign visitors make ceremonial offerings, ranging from floral garlands and fruits to teakwood elephants in the hope their wishes will be fulfilled, according to another tourist site.

The shrine houses a golden statue of Phra Phrom, the Thai representation of Brahma, the Hindu god of creation. The shrine is so revered that Thanakorn Pakdeepol, a mentally ill man, was beaten to death in 2006 by two bystanders after they witnessed him vandalizing the statue.


Thousands of worshipers visit the site each day, praying for everything from good health to sports results. They light incense sticks and wai (bow slightly with palms pressed together) to each of the four faces of the statue. For extra luck, worshipers pay respect and money to the shrine's Thai dancers. 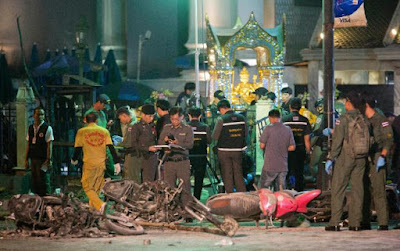