Ex-General Shwe Mann Is Fighting Back The Army! 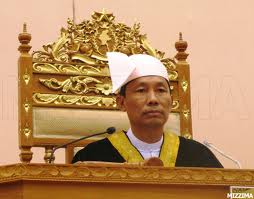 YANGON (REUTERS) - Myanmar's ruling party on Saturday appealed for unity, saying its ousted party chief would stay 'faithful', after a parliamentary vote exposed a rift in the ruling bloc, amid the biggest political shake up since the end of military rule.

President Thein Sein last week sacked his ambitious rival Shwe Mann before party headquarters were sealed off with police trucks in the middle of the night, sparking worries about Myanmar's first free elections in 25 years set for Nov8.

The November election, seen as a crucial test of the country's reforms, is expected to be won by opposition leader Aung Suu Kyi's National League for Democracy, but she is banned from becoming president under the military-drafted constitution.


Shwe Mann, who has stayed on as the speaker of the lower house, fought back on Thursday when his supporters across the political spectrum rejected a controversial bill that could have led to his impeachment.

The vote underscored the former general's sway among rank-and-file lawmakers and exposed divisions in the ruling Union Solidarity and Development Party (USDP), whose regular MPs were angered by the way in which Shwe Mann was removed from the leadership.

"I understand there are some people in our party who prefer Shwe Mann and are disappointed about the way this happened," Tin Naing Thein, USDP's new secretary general, told reporters at party headquarters in the capital Naypyitaw. "All of us are colleagues who have worked together for many years," he added. "So even if the leadership changes, I believe we are still united."

Under the recall bill opposed by Shwe Mann and Suu Kyi, lawmakers would lose their seats if 1 per cent of constituents signed a petition to recall them and the election commission found the complaint against them justified. In a rare close vote on Thursday, lawmakers postponed the discussion on the bill until the next session of parliament, which will come after the November election.


Shwe Mann has openly voiced his presidential ambitions and has forged a close relationship with the charismatic Nobel laureate. The two last met after Shwe Mann's ouster, right before the reopening of parliament this week. Asked whether he was worried about Shwe Mann's next steps, Tin Naing Thein said: "We are not worried about his response at all. We believe that he's a trustworthy person." "This man will be faithful to his country and his party."