(Philip Bump’s article direct from the WASHINGTON POST on 16 August 2015.) 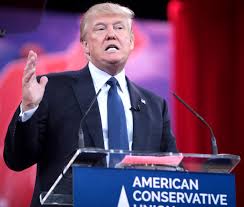 DES MOINES, Iowa -- Shortly after Donald Trump's helicopter touched down in Des Moines on Saturday, a reporter asked him a question about his policies. Trump told her to watch Sunday's "Meet the Press," when he would present a "very comprehensive" plan for immigration. That would be followed in a few days by a policy on taxes ("Who knows the system better than me?") and then others, one after the next.

Good, the reporter said, because "a lot of voters are saying that they really want to see your policies now." For which Trump had a remarkable response. "Well, I think the press is more eager to see it than the voters, to be honest," he said. "I think the voters like me, they understand me, they know I'm going to do the job."

Trump added: "You know, when you put out policy, like a 14-point plan? A lot of times in the first hour of negotiation, that 14-point plan goes astray, but you may end up with a better deal. That's the way it works. That's the way really life works. When I do a deal, I don't say, 'Oh, here's 14 points.' I got out and do it. I don't sit down and talk about 14 points."

"But I know the press wants it," he continued. "I don't think the people care. I think they trust me. I think they know I'm going to make good deals for them." There's an enormous amount of insight in that statement, about both Trump and about politics.


One key advantage that Trump has is that he is unconstrained by the norms of running for office. He doesn't need to spend time raising money because, however much he actually has, it's in the billions -- hundreds of millions of which are liquid and with millions more coming in regularly. He doesn't need to actually win, because he's already accomplished -- and employed. He doesn't need to worry about what he says because so much of his appeal to voters is centered on his not caring what the repercussions are.

All of which means that he's unconstrained by campaigning. He doesn't have to prove his chops to you; he's a billionaire. On "Meet the Press," Chuck Todd asked him if he wanted Ukraine to join NATO. Trump told Todd, without mincing words, that he didn't care. "If it goes in, great," Trump said. "If it doesn't go in, great."

For another candidate, such a statement would reveal a lack of preparedness or seriousness. For Trump, it's barely remarkable. If he'd had a strong opinion on such a nuanced foreign policy question, it would raise more eyebrows than if he hadn't.

And let's be honest: Almost no voters care about Ukraine's NATO membership either. Not many people care about the details of any policy, which is why most people don't know those details. Obamacare passed five years ago, and people still don't really know what it is, with notable exceptions at the partisan extremes.

When people are considering candidates, most will review top-line policy positions, if they compare policies at all. This is why we have political parties: so that we can have a cheat sheet for what people stand for without having to do a lot of reading and becoming experts in particular issues.

When Trump says that only the press cares about detailed policy papers, he's largely right, particularly this early. After all, his stated policies are so loosely formed as to draw derision from most quarters -- and yet he's still leading the Republican field.

Trump is also introducing something else new to the campaign process: An explicit reliance on personality. Much of what we do when we choose a candidate is to try to use past actions to predict future behavior. But we're bad at that, both because we can't help but blend our desired outcome into our analysis, and because past action is actually a bad way to predict the future. 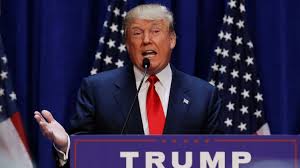 If you had to predict if Barack Obama would endorse same-sex marriage based on what he'd said and done up to Election Day 2008, you'd have been wrong. But Obama's base was happy with the same-sex marriage decision -- and, in many cases, probably expected it -- because they had an expectation of the sort of liberal Obama was or would be. And that expectation was built, to no small extent, on who Obama was more broadly. On personality.

Trump's answer to the reporter in Des Moines was that people trust him, are voting for him based on who he is, not what he'll do. And, again, that so far seems to be the case. But he was also saying something else: That defining specific things he'd do now was silly, since they'd so quickly go out the window. He's made similar arguments in the past, arguments that seem an awful lot like uncertainty or hemming. Sometimes, they probably were. But in responses to certain questions, he says: We'll see. That's not always a crazy idea.

(An aside: One problem pundits -- myself included -- have made in analyzing Trump is that we think his failure to campaign with a normal campaign necessarily belies a lack of seriousness. He'll never run; he'll never fill out FEC paperwork; he'll never do retail politicking. In each case, people have overestimated how difficult those things are.

Donald Trump walked through a giant crowd of people at the Iowa State Fair in 90-degree heat in a sport jacket for 45 minutes on Saturday, shaking hands and eating a pork chop. Tough stuff. Then he got in his helicopter and went back to his jet to fly home. What's the big deal?)

On "Meet the Press," Trump and Todd did indeed talk about immigration. Trump's proposal was not very comprehensive, though it did include some apparently new elements: repealing President Obama's executive orders and revoking the clause in the 14th Amendment that grants citizenship to people born in America. It's still a jumbled group of ideas.

But I only care because I'm in the media.