Ma-Ba-Tha has responded NLD Tin Oo’s accusation by claiming that NLD is the one attacking Ma-Ba-Tha through generously foreign-funded media campaign worldwide. The notorious Muslim media Aljazeera and other left-wing media organizations like Time and CNN have been continuously fed by NLD the negative news of Ma-Ba-Tha as a Buddhist-Extremist organization. Notorious OIC has also heavily funded NLD and Aung San Suu Kyi, the monks added.

Who Is Joseph Fisher?

From 2011 to 2013 he was the Political and Press Officer at the British Embassy in Rangoon and despite now working full time for ASSK he is still drawing a very generous salary from the Rangoon Embassy as he supposedly is on a very-long-term paid leave from the British Foreign Office. His service as the political-fixer for NLD obviously is costing nothing to NLD and ASSK, thanks to long-suffering British taxpayers.

Ma-Ba-Tha monks are basically accusing the Muslim-sympathizer ASSK as a British puppet heavily funded by the Islamist OIC so that Burma will eventually be Islamized once her NLD gains the political power. Tiny Bangladesh has nearly 200 million half-starving Muslims eager and ready to move into our Burma, added one Ma-Ba-Tha monk who strongly believes that he and his fellow Burmese Buddhist monks are fighting for the survival of their race and religion.


For the utter annoyance of Ma-Ba-Tha nationalist monks the Rangoon embassies of US, UK, Australia, and EU issued together just last week an open letter urging Burmese Buddhist monks to not interfere with politics and also warning dire repercussions against Buddhist monks by their respective countries if NLD does not win the November General Elections because of Ma-Ba-Tha campaign. 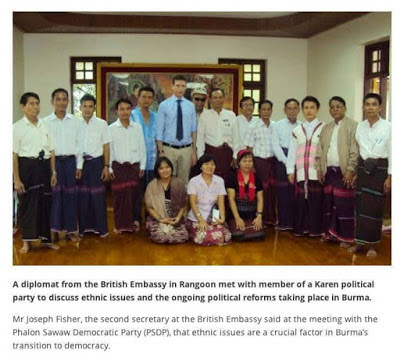 (Blogger's Notes: British historically hated Burmese nationalists especially the nationalist Buddhist monks since the colonial days and following is a proof of that lasting hatred mentioned in 1936 by none other than British Colonial Police officer Eric Blair a.k.a George Orwell.

In Moulmein, in lower Burma, I was hated by large numbers of people – the only time in my life that I have been important enough for this to happen to me. I was sub-divisional police officer of the town, and in an aimless, petty kind of way anti-European feeling was very bitter. No one had the guts to raise a riot, but if a European woman went through the bazaars alone somebody would probably spit betel juice over her dress. As a police officer I was an obvious target and was baited whenever it seemed safe to do so.

When a nimble Burman tripped me up on the football field and the referee (another Burman) looked the other way, the crowd yelled with hideous laughter. This happened more than once. In the end the sneering yellow faces of young men that met me everywhere, the insults hooted after me when I was at a safe distance, got badly on my nerves. The young Buddhist priests were the worst of all. There were several thousands of them in the town and none of them seemed to have anything to do except stand on street corners and jeer at Europeans.

With one part of my mind I thought of the British Raj as an unbreakable tyranny, as something clamped down, in saecula saeculorum, upon the will of prostrate peoples; with another part I thought that the greatest joy in the world would be to drive a bayonet into a Buddhist priest's guts. Feelings like these are the normal by-products of imperialism; ask any Anglo-Indian official, if you can catch him off duty.

Now they have one of their British citizens on the verge of gaining political power in their old colony Burma again since Aung San Suu Kyi was married to a British citizen and her two sons are British born and bred and she had lived in UK for at least 30 years since her college days.)
Posted by Hla Oo at 7:48 PM