It was not immediately clear if the site's editors intended to challenge the shutdown order with the Communications and Information Ministry, the only means of appeal allowed under Singaporean law.

Editors of The Real Singapore were told to provide information about the website's operations and finances to authorities by May 11, reports said. They face fines of up to Singaporean $200,000 (about US$150,000) and a maximum three years in prison for failure to comply with that request, reports said.

The shutdown order followed charges filed in April against two of the website's editors, Yang Kaiheng, a Singaporean, and Ai Takagi, an Australian, according to news reports. The charges include sedition and other criminal charges in connection with the editors' alleged failure to produce documents as requested by police, reports said.

The charges were in connection with articles that authorities said stoked hostility between ethnic groups, according to news reports. One article alleged a Philippine family complained that drums were played too loudly during a Hindu ritual procession on February 3, which provoked an incident between revelers and police that, according to the article, resulted in three arrests.

Yang was allowed to post bail on Monday to travel to Australia to visit an ailing family member on condition that he return by May 17, reports said. The journalists were charged on April 14 and released on bail of Singaporean $20,000 (about US$15,000) each. The next court date is scheduled for May 18, reports said.

"Singapore's licensing system for online news services was designed from the start for this type of censorship and harassment," said Shawn Crispin, CPJ's senior Southeast Asia representative. "We call on the Media Development Authority to repeal its suspension order of The Real Singapore, drop all of the charges against its editors, and allow the website to continue its journalistic work free of threats or reprisal."

In June 2013, Singapore introduced a regulation for all websites that report on local news and receive more than 50,000 unique visitors with IP addresses in Singapore for two consecutive months, according to news reports. Licensed websites are required to pay a Singaporean $50,000 (about US$37,500) bond and remove any "prohibited content," including news deemed detrimental to public interests, within 24 hours of being contacted by the MDA.

Singaporean bloggers have said that the requirements aim to bring online media under the same restrictions that stifle the country's mainstream print and broadcast media. Independent bloggers campaigning for online freedoms and against the licensing system have expressed concern that the closure of The Real Singapore will engender more self-censorship among citizen journalists, particularly when linking to articles about class or race, news reports said. 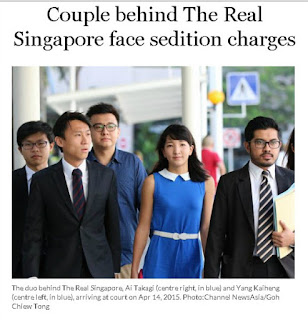 An Australian woman has been arrested in Singapore under "draconian" sedition laws, which carry a jail term of up to three years. The 22-year-old, who several Singaporean media outlets named as Brisbane student Ai Takagi, was arrested along with a 26-year-old Singaporean-Chinese man, named as Robin Yang.

Their arrests appear to have stemmed from a letter from a reader published on Singaporean citizen journalism website The Real Singapore detailing alleged police brutality during Thaipusam, a symbolic Hindu festival celebrated by the country's Tamil community.

The article alleged the brutality occurred after a Filipino family asked police to enforce an existing ban on musical instruments because a nearby drummer was upsetting their child. It provoked a long stream of comments in which several people voiced their anger at Filipinos and foreigners in general. A police statement issued later said it was festival organisers who had approached police.

Singaporean police refused to comment but pointed Fairfax Media to a Channel NewsAsia article about the arrests. In that article police said the pair had been released on bail after being arrested for posting remarks online "that could promote ill-will and hostility among the different races in Singapore".

It's believed police are still investigating but no charges have been laid. "The Police take a stern view of acts that could threaten social harmony in Singapore," a police spokesman is quoted as saying. "Any person who posts remarks online that could cause ill-will and hostility between the different races or communities in Singapore will be dealt with in accordance with the law."

Singapore is notorious for its lack of press freedom. It ranks 150 out of 180 on Reporters Without Borders' latest Press Freedom Index. Curtin University Head of Media, Culture and Creative Arts Dr Joseph Fernandez is an expert in Malaysian and Singaporean media.

He said Singapore's Sedition Act was used quite regularly to restrain free speech, a view echoed in a 2011 Singapore Journal of Legal Studies article. The article detailed several cases since 2005 where the laws had been used to constrain the free speech of bloggers and other citizens, particularly surrounding race and religion.

"Sedition law has no place in a modern democracy. Ordinary laws provide adequately to deal with the kind of mischief presented in cases such as the TRS story that led to the arrest of an Australian woman."

The former Malaysian newspaper editor said the arrests were likely in response to fears of social disharmony provoked by racist comments on the article or a warning shot aimed at other media organisations. "I know all too well how these sorts of things send a shudder down editors' spines," he said, adding that would be the case even more so in Singapore than Malaysia.

Singapore's Sedition Act provides for a fine of $5000 or up to three years in jail. Dr Fernandez said the act was a "very outdated, very crude" tool to use to promote social harmony. "We don't know yet whether these two are going to be charged but pretty clearly the government is not lacking in power to stifle this sort of debate," he said.

"You can ask what really was so hot on this topic? What really was so controversial or contentious about this topic that it deserved the use of such a draconian piece of law? I am baffled, other than to say well 'no surprises there because that's how it's done in Singapore."

Ms Takagi declined to speak to Fairfax Media. Her and Mr Yang's exact relationship with The Real Singapore website is unclear. An article posted on the site said one of its editors had been "called up for investigation" by the police along with about four others in relation to the article but didn't name anyone involved.

"Some time in the future, we will be publishing a full story and explain clearly everything that we can share," the article said. "This may also include how we work and who is behind the website but currently, as investigations are ongoing, such a full response would be inappropriate."

Queensland law student Ai Takagi and her partner, Yang Kaiheng, were arrested over a report that Singaporean authorities said promoted ‘hostility between different classes’ of the population. A Brisbane law student charged with sedition by Singaporean authorities over a citizen journalism website has vowed to continue publishing in a city state that she has said “stifles dissenting voices”.

Ai Takagi and her Singaporean partner, Yang Kaiheng, face up to 21 years’ jail and $35,000 in fines each after their arrest in March over material on their website, the Real Singapore. Police alleged one article – which incorrectly claimed an incident during a Hindu festival was provoked by a Filipino migrant’s noise complaint about drums – promoted “ill will and hostility between different classes of the Singapore population”, which an offence under the Sedition Act.

Takagi, 22, who is based in Singapore but in the final year of a law degree at the University of Queensland, indicated on Thursday that she hoped to avoid jail time. “I believe that the court is fair so I believe that it shouldn’t be [the maximum penalty] based on the severity of the offences,” she told ABC radio. “Obviously this is stressing out everyone involved but I’m staying positive.”

Takagi said the website she developed with Kaiheng was meeting an untapped demand for everyday people in Singapore to vent their “opinions and frustrations” outside a mainstream media that was “heavily censored by the government”.

The couple, who appeared in court on Tuesday also charged with failing to produce documents relating to advertising revenue, were continuing to receive legal advice, Takagi said.

“This is actually a law that is recognised to be used for stifling dissent. It has been used in the past and I and everyone involved in the website have always known there is a risk in doing what we do.” Her family in Brisbane had told her “good luck and be careful”, Takagi said.

Police investigators had indicated the website’s “misreporting had caused local Singaporeans to be angry at the foreign nationals who complained and caused the incident” at the festival, Takagi said. This was enough to trigger the Sedition Act, police told Takagi.

Meanwhile, the Real Singapore, one of a number of emerging citizen or crowdsourced journalist websites in Singapore, plans to keep publishing. “The mainstream media for itself is heavily censored by the government and then you won’t find dissenting voices and everything … looks very happy in the mainstream media,” Takagi said.

“That’s one of the main reasons websites like the Real Singapore exist – because people feel that their voices are not actually being heard, which is why so many people are willing to send their opinions and complaints in because there isn’t the space for that in the mainstream media.”

Many of the contributions to the Real Singapore related to “complaints about how certain policies have affected people’s lives. A lot of times it’s to do with their jobs. Definitely you can see that people are not really happy with a lot of the policies the government is putting out here,” she said. “It’s obviously not everybody but it’s a section of the population that are not heard.”


She said newspapers tended to follow government announcements of policy by selectively interviewing people who were enthusiastically supportive without “the balance of [other] people saying this might be a problem”. Takagi described the Australian media landscape as “slightly more balanced”, with more outlets to represent competing views.
Posted by Hla Oo at 4:33 AM