It is unclear whether either of the two arrested men is the suspect seen on a security camera leaving a backpack at the crowded shrine shortly before the bombing on 17 August. Thai authorities have issued three more arrest warrants - making seven in total.

Thailand's national police spokesman Lt Gen Prawut Thavornsiri holds a tablet displaying a picture of an unnamed foreign man wanted by the police at the police headquarters in central Bangkok on Tuesday. He also presented a sketch of a foreign suspect, "Ali Jolan", along with another foreign man, "Ahmet Bozoglan."

The Thai investigation into the bombing is gaining momentum, says the BBC's Jonathan Head in Bangkok. The latest developments in this case suggest police are dealing with a militant network - a network that could have been planning more attacks, he says.

But the motive for the bombing - unprecedented in its scale in Thai history - is still unknown, although several analysts have suggested it may be linked to the deportation of Muslim Uighurs from Thailand to China. 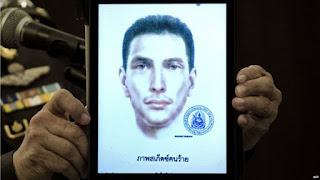 "We have arrested one more, he is not a Thai," Mr Prayuth told journalists after his weekly cabinet meeting, calling him "a main suspect and a foreigner". Images of the detainee in military custody showed a tall, thin man with trimmed facial hair, wearing sunglasses and a baseball cap.

At a news conference, Thailand's national police spokesman Lt Gen Prawut Thavornsiri said the man was intercepted as he attempted to cross the border illegally into Cambodia. Thai media circulated a photo of a Chinese passport which was claimed to belong to the man detained on the border.

On the passport, he is identified as Yusufu Mieraili, 25, from Xinjiang province - home to a significant Muslim Uighur population. One police investigator also identified him as "Yusufu", Thai media said. Thailand controversially repatriated more than 100 Uighur Muslims to China in July.

China will be watching the investigation in Bangkok closely. Speculation about who was behind the bombing has ranged widely, but has included the suggestion that it was carried out by sympathisers of China's predominantly Muslim, Uighur minority. 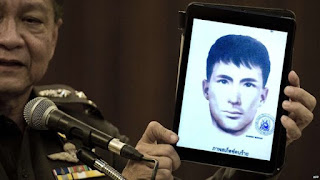 China has long faced criticism for the perceived harsh restrictions it places on religion and culture in its western Xinjiang region - where the majority of Uighurs live - and Thailand recently found itself in the spotlight following its forced repatriation of more than 100 Uighurs to China.

If it is confirmed that the suspect was found in possession of a Chinese passport, it will throw the spotlight on an ethnic conflict that China has long argued poses an international threat.

Attacks allegedly carried out by Xinjiang-based groups against Chinese targets have intensified in recent years, including a suicide attack in Beijing's Tiananmen Square and a knife attack at Kunming Station that left more than 30 people dead.

But although some Uighur militants have reportedly been involved in foreign conflicts, there has been little evidence to show any more sophisticated cross-border links.

Thai authorities have also released details of the three new suspects for whom they have issued arrest warrants. One suspect is an unidentified Turkish man, another a foreign man named Ahmet Bozoglan and a third a foreign man named Ali Jolan. All face charges of illegally possessing explosives. 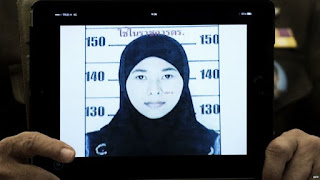 On Monday, Thai police issued arrest warrants for two suspects - a 26-year-old Thai Muslim woman, Wanna Suansan, and an unnamed foreign man. However, a woman who claims to be Ms Suansan told AFP news agency from Turkey that she had last been in Thailand three months ago.

A woman claiming to be Wanna Suansan - the sole named suspect in the bombing - has said she is innocent and living in Turkey. She said she was "shocked" to have been named as a suspect.

Police chief Somyot Pumpanmuang was quoted as saying the immigration officers had been transferred because it had emerged that foreigners had been able to enter the country illegally. The transfers came just a day after the same police chief said he would reward his own men for making the first arrest. 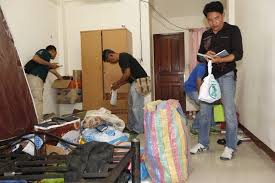 Thailand's police chief has announced that he will give an $83,000 (£53,793) public reward to his own men after they apprehended a suspect in the deadly bombing at Bangkok's Erwan Shrine. Somyot Pumpanmuang said the officers deserved it as there had been no public tip-off to help them.

The 17 August blast, which the government called the worst such attack in Thailand, killed 20 people. One man has been arrested, and warrants have been issued for two other people. It is not clear if the unnamed man detained by the police is the chief suspect in the attack. Police have said they do not believe he is the man seen in CCTV footage at the shrine just before the explosion.

Police say the suspect under arrest is a 28-year-old foreigner and that bomb materials were found at his home. The arrest is a possible breakthrough for Thai police, says the BBC's Jonathan Head 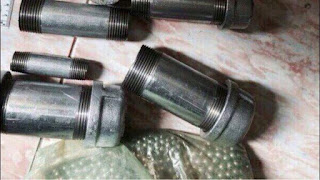 Police chief Pumpanmuang said that the Thai police should be credited for capturing the suspect. "The accomplished work that led to the arrest is truly the work of the authorities and their investigative abilities. "This was the work of the Thai authorities, there were no tip-offs," he added.

The warrants were issued after police found bomb-making materials in a second apartment. Police spokesperson Prawut Thavornsiri said they had found "parts to make bombs and electric charges".


"We found fertiliser bags, watches, radio controls," Mr Prawut said. "These are bomb-making materials... nobody would keep urea fertiliser and gunpowder unless they wanted to make a bomb."