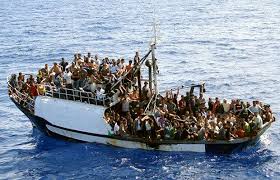 
There are some who dislike the term because it implies something voluntary but that it is applied to people fleeing danger. A UN document suggests: "The term 'migrant'… should be understood as covering all cases where the decision to migrate is taken freely by the individual concerned, for reasons of 'personal convenience' and without intervention of an external compelling factor."

"Migrant used to have quite a neutral connotation," explains Alexander Betts, director of the Refugee Studies Centre at Oxford University. "It says nothing about their entitlement to cross that border or whether they should be." But some people believe that the word has recently developed a sour note. It is being used to mean "not a refugee", argues Betts.

Online searches for migrant are at their highest since Google started collating this information in 2004. And in the past month (to 25 August using the Nexis database), the most commonly used term in UK national newspapers (excluding the Times, the Sun and the Financial Times) was migrant - with 2,541 instances. This was twice as popular as the next most frequently used word, refugee.

A refugee, according to the 1951 Refugee Convention, "is any person who, owing to a well-founded fear of being persecuted for reasons of race, religion, nationality, membership of a particular social group or political opinion, is outside the country of his/her nationality and is unable, or owing to such fear, is unwilling to avail himself/herself of the protection of that country".

But there would be many people who would be wary of labelling someone a refugee until that person has gone through the legal process of claiming asylum. In the UK, and other places, claims for "refugee status" are examined before being either granted or denied.

"The moment at which they can officially say whether they are refugees or economic migrants is the moment at which the EU state that is processing their claim makes its decision," says Tim Stanley, historian and columnist for the Daily Telegraph. "I am not questioning the validity of their narrative, I am not saying that anyone was lying about it. I am saying that it is down to the state in which they have arrived to define what they are."

Asylum seeker refers to someone who has applied for refugee status and is waiting to hear the result of their claim. But it is also often used about those trying to get to a particular country to make a claim. The word asylum is very old indeed having first been used in 1430 to refer to "a sanctuary or inviolable place of refuge and protection for criminals and debtors, from which they cannot be forcibly removed without sacrilege".

The most common descriptor for asylum seeker in UK newspaper articles between 2010 to 2012 was the word failed. But while the term failed asylum seeker describes someone who has gone through a well-defined process, there are less specifically applied terms.

One of the more controversial ones is illegal immigrant, along with illegal migrant. A study by the Migration Observatory at Oxford University analysed 58,000 UK newspaper articles and found that illegal was the most common descriptor for the word immigrants.

"The term is dangerous," argues Don Flynn, director of Migrants Rights Network. "It's better to say irregular or undocumented migrants." Calling someone an illegal immigrant associates them with criminal behaviour, he adds.

Other critics of the phrase say that it gives the impression that it's the person that is illegal rather than their actions. "Once you've entered the UK and claimed asylum, you are not illegal. Even if your asylum claim is refused, you still can't be an illegal migrant," says Zoe Grumbridge from Refugee Action. 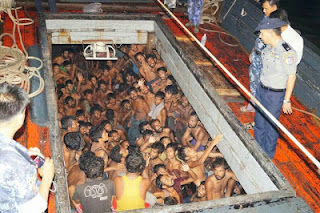 The UN and the EU parliament have called for an end to the phrase. Some people have also criticised the use of clandestine. In 2013, the Associated Press news agency and the Los Angeles Times both changed their style guides and recommended against using the phrase "illegal immigrant" to describe someone without a valid visa.

But others disagree, saying that the phrase can be a useful description. "If you are coming into a country without permission and you do it outside the law, that is illegal," says Alp Mehmet, vice chairman of MigrationWatch UK. "If they haven't entered yet, they are not illegal immigrants, although potentially they are migrating using illegal means."

Clearly there are those who want to make a distinction between people using the accepted legal channel to enter a country and those who are entering by other methods. "I understand why people are uncomfortable with that term but it is accurate when you are talking about someone who has broken the law to enter the country or who has been told to leave the country and is breaking the law by staying," says Stanley.

Another criticism of the term immigrant, with or without the word illegal added on to it, is that it is less likely to be used to describe people from Western countries. Some commentators have suggested that Europeans tend to be referred to as expats.

"Very often when we talk about British people who migrate," says Emma Briant, author of the book Bad News for Refugees, "we tend to talk of them as expats or expatriates. They are not immigrants." There has been some satirical commentary about the differences between the terms.

But the shift towards the neutral blanket term migrant has been pronounced. To again use UK national newspapers as a measurement, 15 years ago, in the month to 25 August, the terms refugee, asylum seeker and illegal immigrant were all used more often than migrants. And many disagree that migrant is in any way offensive. "It's a proper description for anyone who has moved across a border," says Don Flynn from the Migrants Rights Network.

Judith Vonberg, a freelance journalist who has written for the Migrants' Rights Network about the issue, goes further. She says that ditching the word could "actually reinforce the dichotomy that we've got between the idea of the good refugee and the bad migrant". Alp Mehmet, from Migration Watch, also believes that migrant should be used but because it is an easy word to understand. "Everyone… knows exactly what we mean by migrants."

Some people also believe that migrant is an appropriate phrase to use when a group of people could include both refugees and economic migrants. Tim Stanley argues that it does accurately reflect a significant number of people who are making the crossing into Europe. "It is why the UNHCR is absolutely right to describe that group of people as both migrants and refugees," he says. 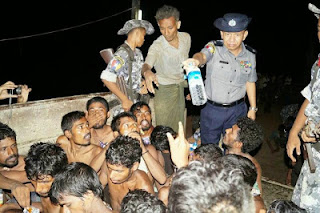 The use of the term economic migrant has been much debated. Home Secretary Theresa May used it in May to describe migration into Europe. She said that there were large numbers of people coming from countries such as Nigeria and Somalia who were "economic migrants who've paid criminal gangs to take them across the Mediterranean". The term economic migrant is "being used to imply choice rather than coercion", says Betts. "It's used to imply that it's voluntary reasons for movement rather than forced movement."

Some words have fallen almost completely out of favour. Alien was used regularly in the UK press before World War Two, says Panikos Panayi, professor of European history at De Montfort University. "The first major immigration act [in the UK] was called the Aliens Act 1905," he says.

But in the US, alien remains official terminology for any person who is not a citizen or national. The Obama administration proposed Dreamers as a new positive way - with its reference to the American Dream - of describing undocumented young people who met the conditions of the Dream act (Development, Relief, and Education for Alien Minors).

There is another word with positive connotations that is not used much anymore. "Exile has gone out of credit," says Betts, since the end of the Cold War. "It had a slightly sort of dignified and noble connotation," he argues.

It was used to describe someone who had been forced out of their country but was still politically engaged with it and was planning on going back one day. "I think that today, many Syrians are in that position," says Betts.


The shifting language of migration might seem petty to some but to those involved in the debate there is no doubt of its importance. "Words matter in the migration debate," says Rob McNeil from the Migration Observatory.
Posted by Hla Oo at 7:53 PM