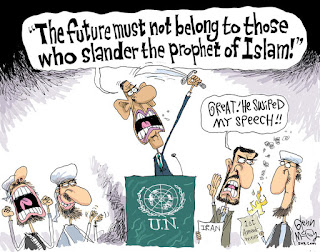 
That latest poll ‘leaked’ to MSNBC poses the Muslim Obama question and it uncovers this. A majority of Republicans, and even more Donald Trump supporters, remain unconvinced that President Obama is a Christian as he professes.

In a poll released Tuesday by the liberal firm Public Policy Polling — and obtained early by MSNBC’s “Rachel Maddow Show” — 54 percent of Republican respondents said they believe Obama is a Muslim,while 32 percent were uncertain and 14 percent believed his claims that he is a Christian.

When it comes to Trump supporters, that number of those who believe the president is a Muslim swells to 66 percent while only 12 percent take him at his word that he is a Christian. A whopping 66 percent of Trump’s supporters also believe Obama was not even born in America, according to the poll.


The lefties at Public Policy aren’t necessarily the best place to go for a look at the Republican soul, of course. The firm has described itself in the past a “Democratic-leaning” because it polls for only progressive campaigns, groups and organizations on a private basis. That the results were leaked to the “Rachel Maddow Show” just proves the point.

Related posts at following links:
Barrack Hussein Obama: The First Muslim President of US
Posted by Hla Oo at 11:37 PM