(Breaking news article direct from the BREITBART on 14 November 2015.)

One of the Paris terrorist was so-called refugee migrant who registered just last month as a refugee in Greece island of Leros. Two of the suicide bombers who caused carnage in the Paris massacre are thought to have sneaked into France by posing as refugees from Syria.

The disclosure, which came amid claims of French intelligence failures, inevitably raised new security concerns about Europe’s borders. Police said the two men, who arrived in Greece last month, were among seven attackers, one as young as 15.  All wearing explosive vests, they roamed across the French capital in three teams, perpetrating the ‘worst acts of violence’ in the country since the Second World War. Fingerprint records show that two of the terrorists had arrived in the EU as refugees through Greece.

A Syrian passport found near the body of one of the gunmen who struck at the Stade de France showed the holder, who was born in 1990, had passed through the Greek island of Leros on October 3.


Greece’s deputy minister in charge of police, Nikos Toscas, said he was ‘identified [as a refugee] according to EU rules’ as he passed through the country, but did not know if it was checked elsewhere en route to Paris. In all, 129 people were killed in a series of co-ordinated bomb and gun attacks on Friday night. With 99 of the 352 wounded critically ill, the death toll is expected to rise.

The Greek government has announced one of the terrorist gunmen who had a part in killing over 120 in Paris on Friday evening entered Europe while masquerading as a refugee just six weeks ago.

Reports early on Saturday that one of the gunmen was found to have been carrying a Syrian passport have been followed by an announcement by Greek minister for citizen protection Nikos Tosca that the individual was masquerading as a refugee, reports Greek Antenna news.

The unnamed killer was registered on the Greek island of Leros in the southern Aegean sea on the third of October. The Island is just ten miles from the Turkish coast and has been a major point of ingress for so-called ‘refugees’ into Europe, alongside neighbour island Kos.

Having come ashore in Europe in October, the killer spent just six weeks as a refugee before killing in Paris. It is possible the man had travelled from Syria with his fellow killers with the express intention of attacking Paris, and taking advantage of the migrant flow to pass into the continent unnoticed. Britain’s BBC reports this afternoon the group may have been a self contained terror ‘cell’ from Syria.

The news will come as a major shock to the European establishment who have mocked and derided those who have warned that the migrant route into Europe would be exploited by those wishing to do harm to Europe.

Latest United Nations estimates show over 800,000 migrants have passed through the Mediterranean on their way to Europe this year, with 660,700 landing in Greece and 142,400 in Italy. Many more travel north through the Balkans, contributing to the minimum 1.5 million migrants expected by just Germany to the end of 2015.

In April of this year, just before the British General Election, UKIP leader Nigel Farage travelled to the European Parliament in Strasbourg to warn that ISIS and its sympathisers would try to find their way to European soil to commit terrorist attacks. He was roundly dismissed by the European Parliament, and Britain’s mainstream media.


Earlier this week Hungarian Prime Minister Viktor Orban announced that he would bolster Greek’s border controls by sending 300 police to help stop migrants. He said in an interview that the Greeks were not doing their job properly in securing Europe’s borders, but simply processing all that come, and sending them on into Europe. 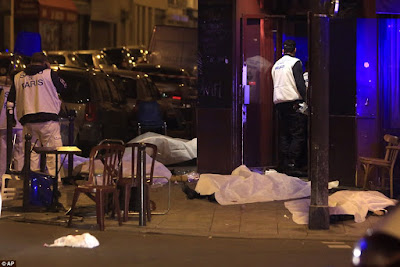