(Raymond Ibrahim’s article from the GATESTONE INSTITUTE on 11 November 2015.)

"We will not stop hunting Christians and burning churches. Christians are Allah's enemies!" – Islamic leaders, Aceh region. In other parts of Indonesia, where Islamic law, or Sharia, is not enforced, churches, even fully registered ones, are also under attack.

On Dec. 25, 2012, with all required paperwork in place, when the congregation assembled on empty land to celebrate Christmas, hundreds of Muslims threw rocks, rotten eggs, and bags filled with excrement at the Christians. Police stood by and watched. For Indonesia, the country once hailed as the face of "moderate Islam," the "extremist" behavior one would expect of ISIS has apparently become the norm.

In compliance with Islamic demands, Indonesian authorities in the Aceh region have started to tear down Christian churches. Their move comes after Muslim mobs rampaged and attacked churches. At least one person was killed; thousands of Christians were displaced.


On Friday, October 9, after being fired up during mosque sermons, hundreds of Muslims marched to the local authority's office and demanded that all unregistered churches in Aceh be closed. Imams issued text messages spurring Muslims from other areas to rise up against churches and call for their demolition.

On Monday, October 12, authorities facilitated a meeting with Islamic leaders and agreed to demolish 10 unregistered churches over the course of two weeks. Apparently this was not fast enough to meet Muslim demands for immediate action. On the following day, a mob of approximately 700 Muslims, some armed with axes and machetes, torched a local church, even though it was not on the list of churches agreed upon for demolition. 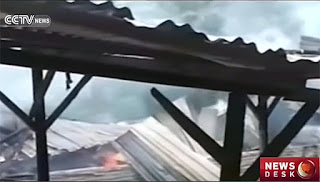 At left is the remains of a church in the Aceh region of Indonesia, still on fire, after hundreds of Muslims attacked it on October 13, 2015.  The Muslim mob then moved on to a second church, an act that led to violent clashes. One person, believed to be a Christian, died after being shot in the head. Several were injured, as Christians tried to defend their church against the armed mob.

Approximately 8,000 Christians were displaced; many fled to bordering provinces. Their fears were justified: Islamic leaders continued issuing messages and text messages saying, "We will not stop hunting Christians and burning churches. Christians are Allah's enemies!"

Instead of punishing those who incited violence and took the law into their own hands by torching and attacking churches, local authorities demolished three churches (a Catholic mission station and two Protestant churches) on October 19. In the coming days, seven more churches are set to be demolished; in the coming months and years, dozens more.

Authorities had originally requested of church leaders to demolish their own churches. "How can we do that?" asked Paima Berutu, one of the church leaders: "It is impossible [for us to take it down] ... Some of us watched [the demolition] from afar, man and women. It was painful."

The situation in Aceh remains tense: "Every church member is guarding his own church right now," said another pastor. As for the displaced Christians, many remain destitute, waiting for "desperately needed clean water, food, clothes, baby food, blankets, and medicines." As Muslim militants were reportedly guarding the border with an order to kill any Christians crossing the line, reaching the Christians is difficult.

Many Muslims and some media try to justify this destruction by pointing out that the churches were in the wrong for not being registered.

In reality, however, thanks to Indonesia's 2006 Joint Decree on Houses of Worship, it is effectively impossible to obtain a church permit. The decree made it illegal for churches to acquire permits unless they can get "signatures from 60 local households of a different faith," presumably Muslims, as well as "a written recommendation from the regency or municipal religious affairs office" -- that is, from the local sheikh and council of Muslim elders: the same people most likely to incite Muslims against Christians and churches during mosque gatherings.

Christian activists say there are many mosques that are unregistered and built without permits, but the authorities ignore those infractions. 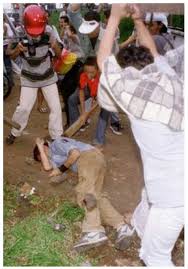 Others try to justify these recent attacks on churches by pointing out that they took place in Aceh, the only region in Indonesia where Islamic law, or Sharia, is officially authorized, and where, since 2006, more than 1,000 churches have been shut.

Yet in other parts of Indonesia, where Islamic law is not enforced, even fully registered churches are under attack. These include the Philadelphia Protestant Church in Bekasi -- nearly 1,500 miles south of Sharia-compliant Aceh. Even though it had the necessary paperwork, it too was illegally shut down in response to violent Muslim protests. On December 25, 2012, when the congregation assembled on empty land to celebrate Christmas, hundreds of Muslims, including women and children, threw rotten eggs, rocks, and plastic bags filled with urine and feces at the Christians. Police stood by and watched.

A church spokesman stated, "We are constantly having to change our location because our existence appears to be unwanted, and we have to hide so that we are not intimidated by intolerant groups. ... We had hoped for help from the police, but after many attacks on members of the congregation [including when they privately meet for worship at each other's homes], we see that the police are also involved in this."

Bogor is another area where Islamic law is supposedly not enforced. Yet the ongoing saga of the GKI Yasmin Church there illustrates how Islamic law takes precedence over Indonesian law. In 2008, when local Muslims began complaining about the existence of the church, even though it was fully registered, the authorities obligingly closed it. In December 2010, the Indonesian Supreme Court ordered the church to be reopened, but the mayor of Bogor, refusing to comply, kept it sealed off.

Since then, the congregation has been holding Sunday services at the homes of members, and occasionally on the street, to the usual jeers and attacks by Muslim mobs. On Sunday, September 27, the church held its 100th open-air service.

The Indonesian jihad is taking place in varying degrees all throughout the East Asian nation and is not limited to Sharia-compliant zones such as Aceh. For the country once hailed as the face of "moderate Islam," the "extremist" behavior one would expect of the Islamic State (ISIS) -- hating, attacking, and demolishing churches -- has apparently become the norm.


(Raymond Ibrahim is the author of “Crucified Again: Exposing Islam's New War on Christians” published by Regnery in cooperation with Gatestone Institute, April 2013).
Posted by Hla Oo at 1:32 AM