Whither Myanmar? The Dilemma For Aung San Suu Kyi

(Derek Tonkin’s article direct from the NETWORK MYANMAR on 29 November 2015.)

A big guessing game is under way. Who will be the next President of Myanmar? Daw Aung San Suu Kyi says she has already made up her mind, but won’t say anything until after her Cabinet is formed. However, only the President can appoint a Cabinet after his (or her) selection. Suu Kyi can nominate her Cabinet at any time, even now. So what does she mean?

Some say that her nomination for the presidency might be her personal physician of long standing, Dr Tin Myo Win. Other names are being bandied around. Suu Kyi has indicated that it would be a “he”. I would rather not engage in the guessing game. In any case much depends on her political strategy which she may well have yet to finalise.


The two men to engage are, as Suu Kyi well realises, the outgoing President Thein Sein and, more especially, the Commander-in-Chief Min Aung Hlaing. Suu Kyi said, rather too hastily after the elections in my view, that she wants to meet both of them as soon as possible, as well as the outgoing Speaker Thura Shwe Mann, to discuss the transition. Minister of Information Ye Htut has said that he doubts such a meeting is really necessary.

The meeting with Shwe Mann has already taken place, and as far as I know, nothing of substance has emerged or indeed could emerge. Shwe Mann is a spent force who lost his seat in the elections to an NLD candidate. I cannot see Suu Kyi now selecting him as her presidential alter ego.

The Commander-in-Chief has said he will meet her in December, and there is no reason why such a meeting cannot take place. But I suspect that nothing of substance will emerge from that meeting either. Min Aung Hlaing has already said that: “We must change gradually. Right now we are not ready for change”. Likewise, when Suu Kyi meets the President, I expect the same insubstantial result.

Suu Kyi’s main aim at present though is not to discuss the myriad of problems which are currently being highlighted in forums, seminars and workshops both inside Myanmar and around the world. It is rather to secure an amendment to the Constitution, before it is too late.

That means persuading the Commander-in-Chief to instruct his men who occupy 25% of the seats in Parliament to agree to a minor change to Clause 59(f) to delete the reference to foreign children and their foreign spouses. But he is likely to do so only if he can be persuaded that it is safe to do so; that is, that the interests, political, economic and military, of the Tatmadaw (Armed Forces) are not put at risk.

I think it unlikely that she will succeed in this endeavour, but I could be wrong. Yet unless she is successful, her new administration will be in serious difficulties from the start.

Most of us outside Myanmar thought it unlikely that the National League for Democracy would secure such a landslide victory, but there were those inside Myanmar, both Burmese and foreign, who thought that such a victory could be achieved. It was after all only a repetition of the landslide of the elections on 27 May 1990, seen by many observers as in essence a plebiscite against continuing military rule.

So too the elections of 8 November 2015. The closer election day drew near, the more likely a landslide seemed possible under the influence of the reverberating NLD campaign for change, the debilitating split in the Union Solidarity and Development Party resulting from the putsch against the Speaker, and the dawning realisation that the elections would on the day be free and fair. Uninhibitedly, and now additionally freed from fear, the Burmese people voted for change, just as they had done in 1990.

There are several dilemmas facing Suu Kyi unless she becomes President. Her most serious is that she cannot take a seat on the influential “inner cabinet” represented by the National Defence and Security Council since the only seat she could otherwise occupy in the Council would be as Speaker of either the Lower or Upper House, a position which I very much doubt that she wants because of its onerous and time-consuming responsibilities; or as Foreign Minister, which would expose her to constant international attention which was welcome when she was in Opposition, but not when she has to defend policies over which she has little or no control, such as the likely continuing discrimination against the Rohingya Muslim community in Rakhine State or outbreaks of fighting in the border regions.

As it is, even with Suu Kyi chairing the NDSC, NLD sinecures would account for only five of the eleven seats, since the military occupy the seats reserved for the Ministers of Defence, Home Affairs and Border Affairs, the Commander-in-Chief and his Deputy, and the Vice-President nominated by the military representatives in Parliament.

Suu Kyi then has the difficult, but not impossible task of persuading the Tatmadaw, through the Commander-in-Chief, that if they are seriously interested in a genuine coalition of political forces in the national interest during the next five-year parliamentary term, then it is vital for her to be selected as President.

If she is not able to achieve this, then she could be tempted to confront the Tatmadaw by insisting on her own nomination as a presidential candidate and seeking to brazen out her selection by reminding the military that she registered her two sons at birth with the Burmese Consul in London as Burmese citizens and that she meets the requirements of the Constitution in spirit if not in letter.

The Committee appointed by the Union Parliament under Clause 60(d) of the Constitution to scrutinise the credentials of the three persons selected as presidential candidates might well decide in her favour, not least because the Committee will have a majority of NLD members. An appeal to the old Constitutional Tribunal would only delay the process as the new Constitutional Tribunal nominated by the new President would reflect NLD interests and would reverse any decision by the old Tribunal.

I am reluctant to speculate any further. I would conclude by saying that I cannot see Suu Kyi just passively accepting her exclusion from the presidency. I do however see plenty of scope for her to make political capital out of the unprecedented situation and to confront the Tatmadaw over an issue which many feel was deliberately engineered by them to exclude her from the highest office. As a politician, Suu Kyi can play it as rough as she likes. Politics in South East Asia is not for the faint-hearted. In any case, I cannot see the Tatmadaw playing the role of Loyal Opposition.

Are we perhaps now witnessing the lull before the storm?

(Blogger’s Notes: Derek Tonkin is a former British Ambassador to Thailand, Vietnam and Laos. He is a very long-time observer of our Burma and the most sincere sympathiser of our Burmese people.


Too add on his comments, I was informed just a few days ago that ASSK has already met former Senior General Than Shwe last week a couple of times at least and laid out a workable plan between her and the military. SG Than Shwe (Retired) must have advised SG MAH, Burma military announced today the meeting date of December 2, 2015 between MAH and ASSK.

Compromise is the only solution and both sides have to soften their hardline attitudes to each other. Otherwise it will be the repeat of 1990 elections again.) 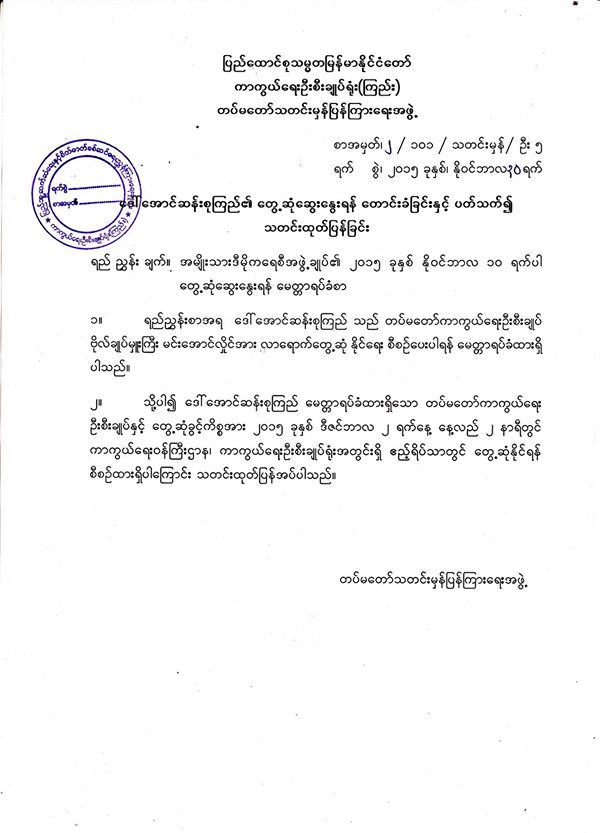