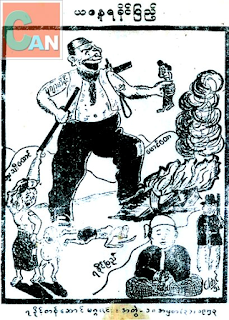 Allegations of genocide and their consequences in Myanmar’s historic election year. Genocide allegations have often been used to attract attention on Myanmar issues. Does the end justify the means? Certainly not to those who know what’s at stake. We all know about the dire situation of the Rohingya, the Muslims in Rakhine who have been disenfranchised.

But at a time of elections when emotions run high, recent genocide allegations from Yale and other institutions, with their obvious errors and outright confrontational tone, may well play a part in worsening the situation, reversing years of trust-building efforts from the United Nations and other stakeholders on the ground.

The most disappointing of recent allegations is the report from Yale, released last week. In their paper, there are several inaccuracies which are intolerably obvious to anyone familiar with the matter. The report glosses over history with cherry-picked sources from human rights groups to “force” certain conclusions.

Unable to distinguish between “Muslims” and “Rohingya,” the authors take evidence for the historical presence of Muslims as the presence of Rohingya (p 52). They make no mention of the Mujahideen rebellion in the 1950s and the 1960s, refugee spillovers from the 1971 Bangladesh Liberation War, and the rise of the “Rohingya” movement in the 1990s.


Not knowing that the name “Rohingya” itself wasn’t used until the 1950s (as shown by Leider), and spread only in the 1990s, the authors puzzlingly criticise the government of Myanmar nationalist U Nu and the 1948 Burmese Constitution for denying “Rohingya” proper recognition.

But how could U Nu recognise a name that had not begun to be used until after 1948? For perspective, the US embassy itself used “Chittagonians” to refer to Muslims in Rakhine well into the late 1970s.

Regarding the evidence of “genocide,” much of the paper cites “policies of persecution” as identified by Fortify Rights, a rights NGO that hardly has any reputation in academic circles. As former British Ambassador and veteran Myanmar observer Derek Tonkin notes, “Fortify Rights’ report served no useful purpose except to aggravate a complex and difficult situation.”

Mr Tonkin adds: “There is simply no evidence from the reports of these observers that the instructions previously issued by local authorities are still in operational use, but every reason to suppose that they are now in disuse or discarded” (Mizzima, 2014).

Despite admitting that the abusive Nasaka border security forces were disbanded in 2013, the authors write about abuses committed under the previous junta as if they are continuing under today’s civilianised government.

This is not to deny that abuses against Rohingya take place, but rather that they are on a much smaller scale than the media and human rights groups seem to suggest. In a stark contrast to attention-seeking human rights rhetoric, the International Crisis Group, which was the only NGO that foresaw the 2011 reforms, has commended the military based on their in-depth field research.

“During the state of emergency in Rakhine in 2012, the military was far more effective than the police had been in restoring order and protecting Muslim Rohingya villages, and those communities generally saw its role as positive” (ICG) [emphasis mine].

There is no denying of the fact that the situation of the Rohingya is dire. But when you accuse someone of something he has not done—such as calling communal violence “genocide” —you make them indignant and remove incentives not to cross that line. By exaggerating the issue to seem worse than it actually is, Yale and others are unintentionally eliciting responses that will match their expectations. It risks becoming a ‘self-fulfilling prophecy’.

It is therefore, ironic that those claiming to defend human rights see participants of only one side of the conflict as “human beings.” For them, the other side is composed of bloodthirsty monsters who enjoy senseless torture.

As someone who lived under sanctions, I understand too well that lobbying groups find it easy and tempting to hector, lecture, and stand upon the moral high ground, fully aware of the fact that doing so does not improve, and may even worsen the situation. Yet ordinary citizens were the ones who suffered grievously under the junta and crippling sanctions imposed by the West, called in by human rights groups and Myanmar’s opposition.


Attention-grabbing headlines and name-calling activate fight-or-flight responses, encourage siege mentalities and put compromise beyond reach. Such narratives are not helpful to peaceful resolution of the conflict.
Posted by Hla Oo at 10:34 AM