Nike Cuts Off Pacquiao For Saying Gays Below Animals

(Darren Rovell’s Article direct from The ESPN on 18 February 2016.) 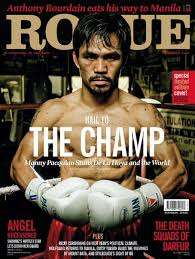 Nike cuts ties with Manny Pacquiao after derogatory homophobic comments. Nike terminated its endorsement contract with boxer Manny Pacquiao on Wednesday after he made derogatory remarks about same-sex couples.

"We find Manny Pacquiao's comments abhorrent," the company said in a statement. "Nike strongly opposes discrimination of any kind and has a long history of supporting and standing up for the rights of the LGBT community." Based on Pacquiao's comments, a spokesman confirmed that he is no longer on the company's endorsement roster. Pacquiao, 37, had endorsed Nike for a little more than eight years.

On Thursday, Pacquiao said he respects Nike's decision to drop him but stood pat on his opposition to same-sex marriage and added that he is happy that "a lot of people were alarmed by the truth." Pacquiao's original remarks were made to a Filipino television station earlier this week


Pacquiao apologized on Twitter within hours. "I'm sorry for hurting people by comparing homosexuals to animals," Pacquiao tweeted. "Please forgive me for those I hurt. God bless!" In the tweet, Pacquiao had a video message in Filipino wearing a Nike shirt with the special logo the company has for him. Pacquiao's promoter, Bob Arum, CEO of Top Rank, said he understood Nike's decision to end the deal.

"Nike is in the business of selling its products to as wide of an audience as they can, and Manny's comments were insulting to a lot of people," Arum told ESPN.com. "His comments were made to a Filipino audience, where same-sex marriage is not as accepted as it is here, and Manny is a convert of enlightened Christianity, which does not believe in same-sex relationships. But to people in the United States, his words can only be viewed as hate speech. "If I was running Nike, I would have to make the same decision they did."

Pacquiao was more of a billboard for Nike, which had its swoosh on his shorts for fights and on his shoes, instead of a true revenue stream. Few Pacquiao items reached the market. Nike has been more active in terminating contracts of late than at any other time in company history. Over the past four years, it has severed deals with cyclist Lance Armstrong, running back Ray Rice, running back Adrian Peterson and sprinter Oscar Pistorius.

Arum, according to The Associated Press, said Pacquiao's message was "diametrically opposed to what I believe. I'm in favor of gay rights and same-sex marriage," Arum said. "I'm apologetic personally to the gay movement in the United States."

Pacquiao's fight against Floyd Mayweather in May 2015 became the richest fight in boxing history, breaking financial benchmarks for ticket sales, sponsorship and pay-per-view buys. His fight against Timothy Bradley on April 9 is expected to be his last. This week wasn't the first time Pacquiao has been involved in a furor over gay rights. In 2012 he was quoted as saying he was against same-sex marriage because "it's the law of God," though he denied implying that homosexuals should be put to death.

An eight-time champion, Pacquiao is the Philippines' most famous person and most popular athlete. He has represented the Sarangani province in the country's House of Representatives since May 2010, though he has drawn criticism for seldom showing up for legislative duties. Polls in the Philippines show he is a strong contender for a Senate seat, which many believe will eventually lead him to seek the country's presidency.

AP: Less than 24 hours after Nike condemned and cut its connection with Manny Pacquiao following his recent homophobic comments, the boxer dug his heels into the ground, reiterating his strong stance against gay relationships on social media and in front of the press on Thursday. 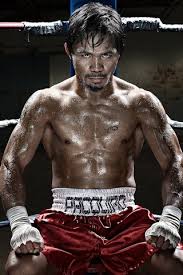 “I am not condemning the LGBT,” Pacquiao said. “What I am condemning is the act. I’m happier because I’m telling the truth ... It’s worse if we will hide the truth. I’m happier that a lot of people were alarmed by the truth.”

Meanwhile, on Instagram, he went further. In a post that was deleted just a few hours after it was published, the 37-year-old quoted a series of Bible verses that discusses homosexuality, including Leviticus 20:13, which includes a death sentence for what Pacquiao referred to as “the act.”

Pacquiao's original words on the Filipino television station on Monday were as follows: "Will you see any animals where male is to male and female is to female? The animals are better. They know how to distinguish male from female. If we approve [of] male on male, female on female, then man is worse than animals."

MANILA - After his controversial statement on same-sex marriage, followed by an eventual apology, boxing champ and legislator Manny Pacquiao took to Instagram early Thursday morning to say that homosexuals must be "put to death."

The Instagram post, which showed a photo of the boxer-politician with his wife Jinkee, earned more than 18,000 likes before it was deleted at around 3 a.m. on Thursday. The post was online for around two hours.

Back in 2012, Pacquiao figured in a similar controversy when he was accused of citing Leviticus and suggesting that homosexuals be “put to death.” Back then, the boxing champ denied citing the Bible verse, claiming he had not read Leviticus yet. That controversy led to The Grove mall in Los Angeles canceling his appearance in the popular events place.

In the since-deleted post, Pacquiao had some words for those criticizing him because of his Christian evangelist faith. "Blessed are you when people hate you, when they exclude you and insult you and reject your name as evil, because of the Son of Man,' captioned Pacquiao, citing the Gospel according to Luke. “Rejoice in that day and leap for joy, because great is your reward in heaven. For that is how their ancestors treated the prophets." 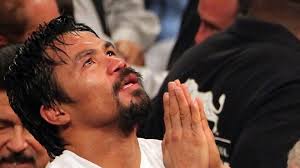 Pacquiao, in an interview Wednesday on DZMM Teleradyo, said he is in favor of the death penalty. He said the death penalty is "biblical." Pacquiao, who is running for a Senate seat, asked the audience to read Romans 13:1-7 from the Old Testament to understand his position. Pacquiao earlier apologized for saying people in a same-sex marriage are "worse than animals".

According to the Book of Romans, "Everyone must submit to governing authorities. For all authority comes from God, and those in positions of authority have been placed there by God. So anyone who rebels against authority is rebelling against what God has instituted, and they will be punished."

(Romans 1:26-28
26: Because of this, God gave them over to shameful lusts. Even their women exchanged natural sexual relations for unnatural ones.
27: In the same way the men also abandoned natural relations with women and were inflamed with lust for one another. Men committed shameful acts with other men, and received in themselves the due penalty for their error.
28: Furthermore, just as they did not think it worthwhile to retain the knowledge of God, so God gave them over to a depraved mind, so that they do what ought not to be done.)
Posted by Hla Oo at 6:30 PM