(Liz Leafloor’s Article from The ANCIENT ORIGINS on 18 February 2015.) 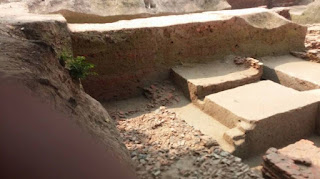 The remains of an estimated 1,000-year-old temple and city have been found in Munshiganj District’s Bikrampur, one of the oldest archaeological sites in Bangladesh. The Bikrampur temple, estimated to be 1,000 years old found in Bangladesh had links to venerated ancient Buddhist scholar.

According to The Daily Star , an ancient Buddhist temple featuring unique architectural elements has been discovered 23 feet (seven meters) beneath the ground. Buddhist history sites the grounds as where Atish Dipankar (980-1053) is thought to have spent his early life. Dipankar is known as a venerated Buddhist scholar and philosopher born over a thousand years ago.

The Daily Star reports that archaeology professor Sufi Mustafizur Rahman of Jahangirnagar University, and research director of the project spoke at a press conference about the temple and excavation project.


Rahman said, “This is one of the oldest archaeological sites in our country. We have collected a number of samples from here. After conducting carbon dating on them, we will be able to gather more information about the time when these structures were built.”

A team of archaeologists from China and Bangladesh have continued excavations which began in 2013. The joint project, involving the Agrashar Vikrampur Foundation in collaboration with Hunan Provincial Institute of Cultural Relics and Archaeology of China, has unearthed the ancient city and the buried temple.

In addition, several stupas (mounded spiritual sites, usually containing Buddhist relics) and a 10 foot (three meters) wide wall have been found – the first of their kinds found in the country’s history of archaeological excavations.

Bikrampur itself is an historic locale of Bengal, a South Asian region known for its rich literary and cultural heritage. It is considered the oldest capital of Bengal since the Vedic Period.

During Emperor Dharmapala’s regime around 820 A.D, approximately 30 monasteries were built in the area.  The region is said to have been the ancient center of Buddhist scholarship, with thousands of professors and students journeying to Bikrampur from as far away as Thailand, Nepal, China and Tibet.

The city and temple at the known Buddhist site with its strong links to ancient Buddhist scholar Atish Dipankar, makes archaeologists from both Bangladesh and China hopeful that further investigations will shed light on Atish Dipankar’s life and the history of Buddhism in the region. Rahman notes the evidence points to a ‘rich civilization’ in ancient Bikrampur. 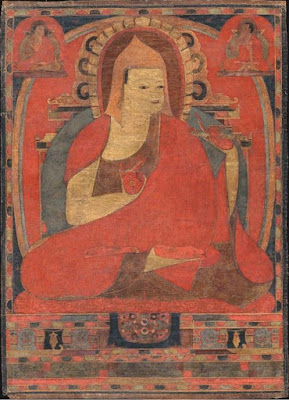 (Portrait of Atish Dipankar ( Atisha) From a Kadampa monastery,Tibet. Circa 1100.)

An estimated thousand-year-old Buddhist city has been discovered seven metres beneath the ground at Nateshwar in Munshiganj. The Director of Archaeological Excavation and Research Project in Munshiganj’s Bikrampur, Nuh-ul-Alam Lenin, announced the discovery at a press conference at the site on Monday.

The excavation at the site in Tongibarhi Upazila was conducted for two months under a joint initiative of Bangladesh and China. Research Director Prof Shah Sufi Mustafizur Rahman said they found two roads made of old bricks in ‘attractive architectural design’, a zigzag 2.75-metre wide wall and many other archaeological relics at the site.

Mustafizur Rahman, who also teaches archaeology at Jahangirnagar University, said the discovery of the relics was the evidence of the existence of a ‘rich civilisation’ in Bikrampur in the past. Twenty Bangladeshi and four Chinese experts took part in the excavation. Officials at the project said the excavation at the site would remain suspended from late this month to November. 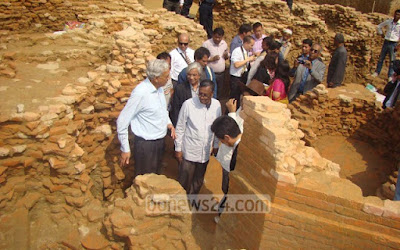 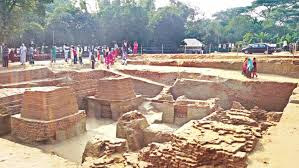 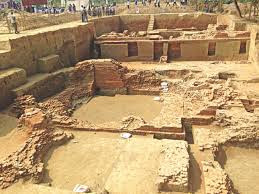