Obama ignores evidence of Baltimore Mosque’s ties to terror and paid presidential visit for center that condoned suicide bombing. There are now 3,186 mosques in America and nearly 80 percent of them have been opened since the Sept. 11, 2001 terrorist attacks.

President Obama ignored evidence from law enforcement warning him that the Baltimore mosque he plans to visit as a gesture of religious tolerance has a long history of ties to terrorism, according to the Investigative Project on Terrorism (IPT). The mosque’s leaders, who will host the president on Wednesday,  have also made outrageous anti-Israel statements.

IPT founder and executive director Steve Emerson told WND his organization was told by FBI sources that Obama was presented the evidence against the Islamic Society of Baltimore. According to Emerson’s investigation, federal law enforcement officials told him they were asked about whether the Baltimore mosque had engaged in radical politics or was connected in any way to terrorism in the past. “They prepared memos for the president’s aides that specifically laid out the sordid history and nexus to terrorism of the Islamic Society of Baltimore,” Emerson told WND.


So what did the president do? “As he has done so many times in the past, he decided to ignore this evidence and still continue his plans to confer legitimacy on a mosque that has a history of having officials connected to Islamic terrorism and to this day still has officials making outrageously pro-terrorist statements that would seem to conflict with the president’s policies,” Emerson said.

The mosque is affiliated with the Islamic Society of North America or ISNA, which has its own sordid history. ISNA was started by members of the international Muslim Brotherhood in the 1980s. The Brotherhood, founded in Egypt in 1928, is banned in many countries as an extremist organization.

“One can only conclude that the selection of this mosque by the president was made as part of his consistent policy to not even utter the term ‘radical Islam’ and the simultaneous policy of inviting only radical Islamist groups and leaders to the White House that FBI documents clearly show were derived from the Muslim Brotherhood and Hamas,” Emerson told WND.

“By blithely dismissing the radical statements made by the officials of this mosque and more importantly by ignoring federal law enforcement’s warning not to confer legitimacy on this mosque because of its previous ties to terrorist groups and leaders, the president has once again legitimized radical Islamic groups at the expense of the Muslims he should be reaching out to — those that have courageously acknowledged the serious magnitude of radical Islam that seems to be prevailing in the American Muslim community,” Emerson added.

While performing his media “stunt” aimed at promoting religious tolerance, Emerson said he fully expects Obama “to invoke the fabricated concept of ‘Islamophobia.'” That term was “invented by front groups for Hamas and the Muslim Brotherhood in a deliberate effort to silence criticism of radical Islam,” Emerson said. 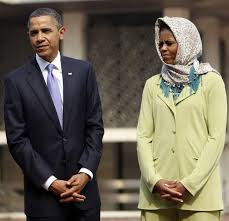 Mohammad Adam el-Sheikh, an imam who served at the Baltimore mosque for 15 years, most recently in 2003, was a member of the Muslim Brotherhood in Sudan in the 1970s. He also has worked for an Islamic relief group that the Treasury Department designated as a terrorist organization in 2004.

But he also told his congregation in Falls Church, Virginia, that Palestinian suicide bombings were sometimes justifiable. “If certain Muslims are to be cornered where they cannot defend themselves, except through these kinds of means, and their local religious leaders issued fatwas to permit that, then it becomes acceptable as an exceptional rule, but should not be taken as a principle,” el-Sheikh said.

WND published the book that exposed the Brotherhood’s agenda, “Muslim Mafia: Inside the Secret Underworld That’s Conspiring to Islamize America”. It should come as no surprise that Obama has chosen the Islamic Society of Baltimore for his first visit to an American mosque, says Dr. Mark Christian, a former child imam who grew up in Egypt the son of a Muslim Brotherhood member.

Dr. Mark Christian grew up in a prominent Muslim family in Egypt and converted to Christianity as an adult. Christian, grew up in a prominent Muslim Brotherhood household in Cairo and had memorized two-thirds of the Quran by the time he was 13. He would eventually break away from Islam and travel to England, then the United States, where he has lived in Nebraska and started the Global Faith Institute.

Christian says ISNA exercises a stranglehold over close to 70 percent of U.S. mosques, making it one of the most influential Muslim organizations in the country.

‘Muslim Obama knows exactly what he is doing’

In keeping with its Muslim Brotherhood benefactors, the Baltimore mosque has a reputation for pushing political Islam or “Islamism.” “President Obama visiting that mosque is part of his agenda. He knows exactly what he is doing,” Christian told WND.

“By law ISNA should be shut down immediately,” due to its ties to terrorism, Christian said. “But because of Obama this organization is still in existence and it will continue in existence because of him and because of Hillary Clinton if she is elected,” Christian said. “The law is clear. If any institution has ties to terrorism it should be shut down and its officers arrested. ISNA has been caught doing that very thing.”

The evidence against ISNA was presented during the Holy Land Foundation terror-financing trial in 2007 and 2008 in Dallas, Texas. ISNA was an unindicted co-conspirator in a funding scheme that funneled money to Hamas. But one of the first things President Obama’s attorney general, Eric Holder, did upon taking office in 2009 was to postpone the Holy Land Foundation trial.

“He refused to continue the prosecution,” Christian said. He not only refused to continue what had been a successful series of prosecutions of American Muslims for their involvement in funding an overseas terrorist organization, but Obama also went to work to legitimize the Muslim Brotherhood brand in the U.S.

“We should not be surprised that the current administration is visiting this kind of establishment in Baltimore, because this has been the way of President Obama and his administration from day one,” Christian said.

“He insisted to have Muslim Brotherhood aides and counsels in the White House, he insisted to have their presence when he was touring Egypt and the Middle East after he became president. He has recorded a video presentation to send to the ISNA every year at their convention. He regularly and religiously invited the Muslim Brotherhood leaders to the White House at every occasion to get their counsel.”

Saudis’ Billion Dollars Propping Up 3,000+ Mosques in US

Of the more than 3,000 mosques currently operating in the United States, about 80 percent of them have opened their doors since the Sept. 11, 2001, terror attacks on New York and Washington, D.C., Christian said. Without billions and billions of Saudi cash and the backing of a large organization like ISNA many mosques would struggle financially in the U.S.

Many of the older, more independent mosques have been suffering financially and become vulnerable to a Brotherhood takeover. “NAIT comes in and offers to help out with renovation or staffing, and once they get their foot in the door they start dictating what this mosque must teach and do,” Christian said.

The mosque does not function like most churches or synagogues in America, he said. There is very little autonomy. “The mosque does not have the freedom to have a separate message from the larger institution. They actually have to work in harmony and they cannot divert from the mainstream whatsoever,” Christian said. “They have to follow Islam, which as an ideology does not allow this type of free thinking. The Muslim Brotherhood cannot allow any mosque to stray.”

Just ask Texas imam Nidal Alsayyed. He stated last month he agreed with GOP presidential hopeful Donald Trump that Muslim immigration should be temporarily halted and was forced to resign his post as director of the Islamic Society of the Triplex in Beaumont, Texas, reported Fox 4 TV in Beaumont.

Nidal Alsayyed, an imam at an ISNA-affiliated mosque in Texas, was fired when he spoke up in favor of Donald Trump’s proposed halt on Muslim immigration. “He was imam at an ISNA mosque and as soon as he opened his mouth he was ousted,” Christian said.

“Peaceful Muslims are not so much dedicated to building a mosque and staffing it and keeping it running. Most of the ones who do that are political Muslims. So the money is key to their control. The Muslim Brotherhood controls mosques like a mafia in America and are not allowing anybody to divert from their way or change the way of thinking.

“So we should not be surprised when we see President Obama visiting this mosque in Baltimore with a radical background and ties to ISNA.”

Islamic Society of Baltimore leaders have worked closely with the Council on American-Islamic Relations or CAIR, which is another offshoot of the Muslim Brotherhood, said Emerson.

In 2014, two leaders of the Baltimore mosque joined with CAIR in a news conference blasting Israeli military actions in Gaza. The conflict, known as Operation Protective Edge, started when Hamas operatives kidnapped and murdered three Israeli teens and continued its incessant campaign of firing rockets with the hope of killing Israeli civilians. Those rockets were fired from densely populated areas, including near schools and houses of worship.

“But Hamas murders and ongoing efforts to carry out more were never mentioned by the CAIR and ISB officials,” according to Emerson’s investigation. “Instead, they blamed Israel when raids aimed at rocket launchers and other Hamas targets inadvertently killed and injured civilians.”

Islamic Society of Baltimore President Muhammad Jameel referred to ‘genocide in the name of self-defense’ and said, “as an American I am ashamed to stand here.” Abid Husain, the mosque’s general secretary, joined Jameel in calling for the U.S. to pressure Israel into opening Gaza’s borders, ending an embargo that was enacted to stop the flow of weapons and materials used to make them.


“The U.S. government must not remain silent about Israel’s indiscriminate assault and unjust use of force,” Husain said. “The right of a nation to defend itself does not extend to unrestrained aerial bombardments of civilian populations and must be condemned.”

Related posts at following links:
Saudis Spent US$ Billions on 24,000+ Madrassas In Pakistan
Posted by Hla Oo at 7:08 PM