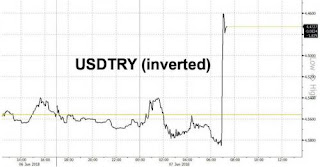 Lira Soars After Turkish Central Bank Unleashes Massive, "Whatever It Takes" Rate Hike: Ahead of today's Turkish Central bank decision, analysts were adamant that if Turkey truly wants to ward off currency bears, it would have to deliver a "shock and awe" rate hike, greater than the whisper consensus call for a 100bps, especially since this is the last rate meeting before June 24 elections, at which Erdogan is expected to be granted virtually supreme powers, and has hinted his ambitions to also dominate monetary policy.

Moments ago the CBRT did just that, when it blew the doors off Lira watchers, by hiking the 1-week Repo Rate an enormous 125bps, from 16.50% to 17.75% - greater than any analysts forecast in a Bloomberg survey - thereby sending a very strong signal to the market. According to some desks, this was a "whatever it takes"-message from the central bank which sent markets a strong signal that it means business.

And looking at the more than 2% bullish reversal in the lira, which soared from 4.58 to 4.48 in kneejerk response, the market got the message.


In its statement, the CBRT said that additional ightening may be needed, referencing elevated levels of inflation and inflation expectations which continue to pose risk on pricing behavior. The bank added that it has decided to strengthen monetary tightening to support price stability and will continue using all tools in pursuit of price stability, noting that tight policy stance to be maintained decisively until marked improvement in inflation outlook is observed.

The Monetary Policy Committee (the Committee) has decided to increase the policy rate (one week repo auction rate) from 16.5 percent to 17.75 percent.

Cost factors have been the main driver of the recent upsurge in inflation. On the other hand, price increases have shown a generalized pattern across subsectors. Despite the mild outlook for demand conditions, elevated levels of inflation and inflation expectations continue to pose risks on the pricing behavior. Accordingly, the Committee decided to further strengthen the monetary tightening to support price stability.

The Central Bank will continue to use all available instruments in pursuit of the price stability objective. Tight stance in monetary policy will be maintained decisively until inflation outlook displays a significant improvement. Inflation expectations, pricing behavior and other factors affecting inflation will be closely monitored and, if needed, further monetary tightening will be delivered.

It should be emphasized that any new data or information may lead the Committee to revise its stance. 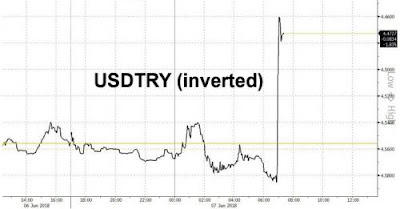 Also of note, the central bank didn’t publish information on its other interest rates.

Last month, the central bank moved decisively as the Lira was in record freefall, by hiking the late window lending rate by 3% after the lira tumbled to a record low of 4.9221. The move was followed by a series of meetings in London, in which Turkey’s central bank governor and deputy prime minister told investors policymakers were prepared to take further action if inflation remains too high, the FT reported.

To be sure, we have seen this kind of reaction on countless occasions before, and since the fundamental problem with Turkey remains - namely the potentially dire level of currency reserves...... only time will tell whether more hikes are needed, but for the moment the central bank has bought itself some time before Turkey's June 24 election, after which all bet s are off anyway.

And perhaps sensing that he has a very limited runway, ahead of the CBRT announcement, president Erdogan called on all Turkish citizens urging them to "deposit your foreign currencies, money, gold under the mattress in banks, participation firms and other investment channels,” state-run Anadolu Agency reported. Turkey has no problem in "income, spending, borrowing and repaying", Erdogan added, confirming that Turkey has a lot of serious problems. 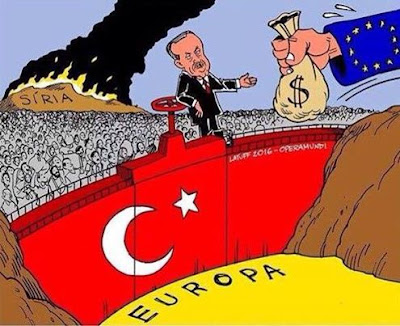