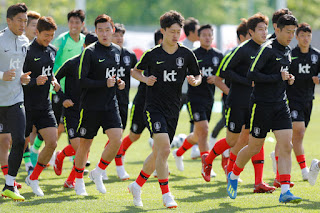 The South Korean soccer team at a training session in St. Petersburg, Russia, on June 13, before the FIFA World Cup (left). The team’s head coach had the players swap shirts to confuse scouting opponents.

The South Korean soccer team had some pretty hilarious tricks up its sleeve. During friendly matches before the World Cup in Russia, Shin Tae-yong, the team’s head coach, had the players swap shirts so that their opponents would be thrown off.


“We switched them around because we didn’t want to show our opponents everything and try to confuse them,” Shin said during a press conference in Nizhny Novgorod, Russia. “They might know a few of our players, but it is very difficult for Westerners to distinguish between Asians, and that’s why we did that.”

Captain Ki Sung-yueng and star winger Son Heung-min were the only players on the team who kept their shirts during friendlies against Bolivia and Senegal. Twitter was pretty tickled by the team’s use of the ol’ all-Asians-look-the-same stereotype against its rivals.

“South Korea's manager has admitted that his players have exchanged shirts during training sessions and friendlies in order to mislead the Swedes: "We are using this tactic because I know that for Europeans, it is difficult to distinguish Asians [by face]."#Russia2018”

Shin’s comments followed reports that a Swedish scout, Lasse Jacobsson, spied on the team. According to Reuters, Jacobsson, equipped with a telescope and video camera, set up in a house near the Korean team’s training base in Austria to observe its practices. Earlier, he was kicked out of a closed training session while attempting to pass as a tourist. 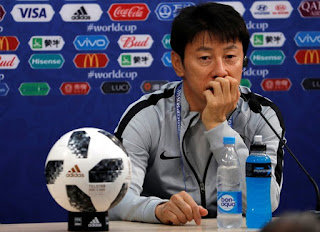 “All coaches probably feel their opponents are always spying on them,” Shin said, seemingly brushing off the controversy. “I think it’s perfectly natural that we all try to get as much information on each other as we can.”

(Blogger’s Notes: Even we the brown-skinned-dark-faced Burmese called fair-skinned-white-faced Chinese “Ta-yoke” meaning the same-face people as for a Burmese all Chinese people look the same. Can't blame westerners for having the same perceptual bias on us Asians. )