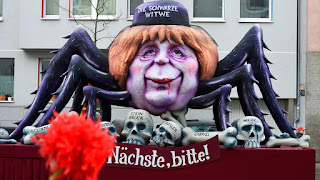 The era of Angela Merkel may be coming to an end as longstanding disagreements on migration policies between her and her Bavarian allies threaten to come to a head and potentially unseat the German leader, who has been at the country’s helm since 2005.

The coalition of the Christian Democratic Union (CDU) led by Chancellor Merkel and the Bavarian Christian Social Union (CSU) led by interior minister Horst Seehofer is in crisis over differences on mass migration.

The CSU under Seehofer has demanded that Germany should be able to reject migrants at the border of the country if they have no identity papers, are registered in another country, or have been refused refugee status previously, but Merkel believes turning them away udermine the EU’s open borders Schengen Area.


The Bavarian has threatened to use his powers as interior minister to order the border is secured unlitaterally — a move which would likely result in Merkel moving to sack him, the CSU walking out of government, and her fragile ‘grand coalition’ unravelling.

Germany is currently admitting around 11,000 asylum seekers every month, according to The Times. Bavarian Minister President Markus Söder has proposed the region use its own aircraft to deport failed asylum seekers.

Disagreements on asylum and migration policy between Seehofer and Merkel are nothing new, with Seehofer previously demanding an upper limit of 200,000 migrants per year and even threatening not to campaign with Merkel and the CDU over the issue in late 2016.

Since then, the rise of the anti-mass migration Alternative for Germany (AfD) to becoming the official opposition to the current grand coalition government in the Bundestag has seen the CSU react by embracing a tougher line on mass migration and champion more conservative social issues, even ordering crosses be put up in government buildings to assert Bavaria’s “cultural identity.”

One of the main considerations for the CSU in the near-term is the looming Bavarian elections scheduled for October of this year. Traditionally, the CSU has managed to form a majority on its own, but the rise of the AfD has sapped away support, leaving the CSU with around 40 percent of the vote according to current polls. 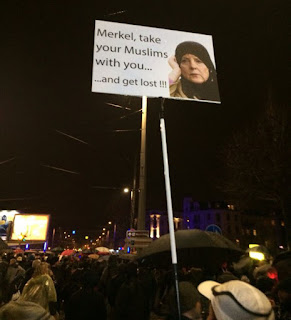 According to German newspaper Die Welt, the current tough stance on mass migration by Seehofer is popular in Bavaria and could explain the party taking the position to try and drive votes back from the AfD.

In the past Chancellor Merkel has been able to dismiss concerns from the CSU but her position as much weaker following one of the worst election results the CDU has ever seen in last year’s national election.

German media have painted a grave picture for the future of Chancellor Merkel, with the Mannheimer Morgen writing that she “has been plucked like a hen after slaughter,” and that her power now merely existed on paper.

Hungarian PM Tells German Conservatives: '2018 Will Be the Year for Restoring the People’s Will. Viktor Orbán has told Bavarian conservatives that 2018 will see eurosceptic, anti-mass migration leaders taking the fight to the globalist establishment.

Seehofer has also been far more friendly with anti-mass migration leaders like Hungarian prime minister Viktor Orban, inviting him to Bavaria several times to speak. In his most recent visit earlier this year, the Hungarian leader said, “The people’s will is clear: the people do not want to live under the threat of terrorism, they want security, they want their borders to be protected, and they want their leaders to take those people out of [Europe] who have no reason to be there.”

Earlier this month Seehofer went even further by joining forces with Austrian chancellor Sebastian Kurz and Italian interior minister Matteo Salvini to form an “axis of the willing” to strengthen the borders of Europe and fight illegal migration.

Chancellor Merkel is expected to make an announcement on her decision on whether or not to accept the CSU’s demands for stronger border on Monday. The German people, according to polls, back the stance of Seehofer.

Angela Merkel is facing the biggest crisis of her chancellorship. Her conservative Bavarian allies, the CSU, are threatening to abandon her over asylum policy. What will happen next? DW examines the likely scenarios.

German Chancellor Angela Merkel might be thinking that Groundhog Day has set in. Not for the first time in the last few years, Horst Seehofer, the leader of her Bavarian allies, the Christian Social Union (CSU), is proving more troublesome than political bedfellows are supposed to be.

There is barely a hair's breadth between the basic Christian conservative values of the two parties, and yet the CSU's more overtly anti-immigrant rhetoric has again pushed the alliance into a crisis, a fever exacerbated by the state elections coming up in Bavaria in October. On Thursday, the Bundestag members from the two parties convened separately to determine their next course of action.

A brief false panic on Friday afternoon, set off by a satirist's cunningly worded tweet suggesting the CSU was splitting from Merkel's Christian Democratic Union (CDU), touched a deep fear on the center-right of German politics. That would be a massive political earthquake, and its consequences would last longer than the hastily arranged election that would have to follow.

Still, politicians from the Bavarian party have made the threat before — most recently in 2015, the last time that Seehofer clashed publicly with the chancellor over asylum policy. But this time, the fact that he is also interior minister, and so directly responsible for border controls, gives the affair a new urgency. So what are the likely scenarios in the present crisis? Here are the options:

The crisis is centered on the "master plan" that Interior Minister Seehofer wanted to present on Tuesday, but which was scuppered at the eleventh hour by Merkel because one of its 63 points — turning asylum-seekers away at the German border — would violate European Union agreements and would be very difficult to implement practically. Seehofer could simply relent on this point — after all, the master plan still represents the kind of major political stamp he would like to make in his new ministerial role.

For a while, it looked like the CSU was more likely to back down: German news agency DPA reported this week that the Bavarian party offered two compromises at a crisis meeting on Wednesday night — both involved asylum-seekers being turned away at the border — with the decision being reversed following a vital EU summit in a couple of weeks.

Merkel rejected both ideas. For her, the imperative is to buy time until that summit — if all goes well, she can preserve international agreements while still keeping the right of her own coalition happy. 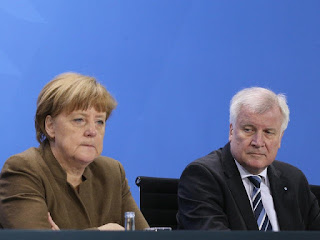 But CSU politicians are briefing reporters that Merkel has got to make a decision by Monday. If no deal is reached, they say, Seehofer will simply impose the regulation using his authority as interior minister — a position that gives him authority over the federal police, and therefore border controls.

But this move would only trigger a new crisis, because Merkel as chancellor has the ultimate power to determine the government's policy guidelines. In other words, Merkel has the constitutional right to overrule Seehofer and make him do what she says.

If it does come down to a straight power standoff between the two party leaders, and Merkel simply overrules Seehofer, then the interior minister's resignation (or his sacking) would seem to be the next inevitable step.

That, pundits agree, would mean the collapse of the coalition government, and probably also the final split between the CDU and the CSU. In the ensuing election, the political map would have to be redrawn, because presumably the CDU would then field candidates in Bavaria. This would inevitably mean a drastic weakening of the CSU — and its potential relegation to a regional party, rather than a regional party within federal party, as it is now. This is essentially unthinkable in the context of their historical alliance — but can't be ruled out now.

Another way out of the impasse would be for Merkel to go to the German parliament, thus testing the loyalty of CDU parliamentarians — and indeed the loyalty of center-left Social Democrat (SPD) Bundestag members, who represent the third party in the country's ruling grand coalition. In fact, as it stands, the SPD votes could be the most reliable for Merkel. That of course entails its own risk — if she loses, she would step down and there would be a new election.

The CDU executive committee is solidly behind the chancellor —at least that is what Schleswig-Holstein State Premier Daniel Günther told the daily Neue Osnabrücker Zeitung. And yet, there are vultures circling in the CDU: Jens Spahn, health minister and Merkel's most vocal internal critic, kept his distance at the Bundestag meeting, and was the only member of the party executive committee to vote against Merkel's own compromise suggestion.

Ominously for the chancellor, Spahn has good relations with another CSU bigwig, Alexander Dobrindt, and the head of the Free Democrats (FDP), Christian Lindner — the business-friendly party that sparked last year's political crisis by blocking any coalition with the CDU as long as it had Merkel at the helm. All three want Germany to take a tougher stance on asylum reform. If Merkel's time does draw to a close, this conservative neoliberal triumvirate is most likely to step into the breach. 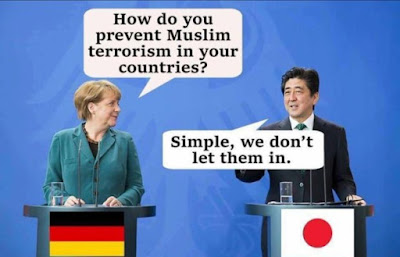