The accusations come as authorities in Hubei, the province at the centre of the outbreak, on Thursday reported a nearly tenfold increase in new cases and a death toll that was more than two times greater than the previous daily count.

The sudden rise, which was attributed to changes in methodology to include “clinically diagnosed” cases, followed eight consecutive days in which China’s health commission had reported declines in new cases. Health experts question the timeliness and accuracy of China’s official data, saying the testing system captured only a fraction of the cases in China’s hospitals, particularly those that are poorly run.


Neil Ferguson, a professor of epidemiology at Imperial College London, said only the most severe infections were being diagnosed and as few as 10 per cent of cases were being properly detected, in a video released by the university. In Wuhan, the official figures for confirmed cases could capture as few as 1 in 19 infections, according to a paper published by Prof Ferguson.

Brendan Murphy, Australia’s chief medical officer, told state broadcaster ABC that China’s prediction the outbreak would be over by April was “far too premature”, adding he expected the number of cases to keep rising.

Addressing reporters from WHO headquarters in Geneva on Wednesday, the organisation’s director-general, Tedros Adhanom Ghebreyesus, struck a more optimistic note, saying the newly confirmed cases of coronavirus in China appeared to have stabilised. “But this must be interpreted with extreme caution. This outbreak could still go in any direction,” he warned.

Getting a proper gauge on infections is seen as critical to ending the outbreak and restarting the world’s second-largest economy. China has been paralysed by the outbreak since the lunar new year holiday last month, when millions of migrant workers travelled home to see their families.

Many are now stranded far from their factories as the country restricts travel. Shops and restaurants remain closed and office workers have been forced to work from home. Multiple patients in the most affected areas, such as Wuhan, told the Financial Times they were waiting for an official diagnosis because of a lack of testing kits. 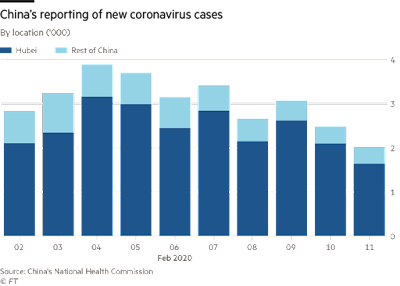 Luo Jun, a 45-year-old woman from Wuhan, said she had been suffering from severe viral pneumonia since Saturday. With private cars banned from the roads, she struggled to walk the 5km to a hospital that would treat her. Once she was there, she underwent a scan that confirmed her symptoms.

Ms Luo was told that she would have to come back at 9am the next day to queue again in order to receive a nucleic acid test, the current standard for confirming coronavirus cases. “I’m too tired. My entire body is drained of energy,” Ms Luo said. Instead of trying to make it back to the hospital, she was waiting at home, assured by the local authorities that she was on a waiting list to receive the test.

Healthcare workers have complained about the laborious and slow bureaucratic testing procedure. A frontline nurse in China, who wished to remain anonymous, said the process took at least two days. Another doctor explained they first had to send a sample to the city-level Centre for Disease Control and then to the provincial-level CDC for retesting. “The testing kits are not very accurate, so we need to do multiple tests,” said a coronavirus researcher who wished to remain anonymous because of the sensitivity of the issue.

The coronavirus tests correctly detected positive results just 20-30 per cent of the time, Tong Chaohui, a medical expert advising the government, told local media. Better hospitals could reach a 50 per cent rate of detection but poor ones might have rates as low as 10 per cent, he added.

Bharat Pankhania, at the University of Exeter’s medical school, said countries with under-developed health systems typically have “minimal facilities for testing and centrally recording data, which could mean a gross underestimate of the number of people infected”.

China’s National Health Commission tells doctors to take two tests one day apart before ruling out an infection. The NHC has since January 29 required doctors to divide patients into “positive test cases” — infected people with no or light symptoms —, “suspected cases” and “confirmed cases”. In a later version of guidance, it allowed doctors to classify light-symptom cases as “confirmed” or “suspected” but not asymptomatic cases.

Nathalie MacDermott, clinical lecturer at King’s College London, said: “To not include asymptomatic or minimally symptomatic cases is flawed thinking in the context of tracking an epidemic.” She added it “not only skews the figures for monitoring of the epidemic but ignores important groups when it comes to understanding the spread of infection”. 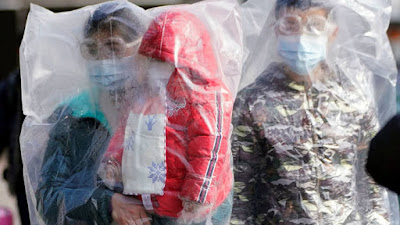