Hymn To A Gothic Beauty: Notre-Dame 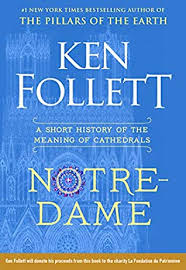 On September 1, 1830, the 28-year-old poet Victor Hugo sat down to write Chapter 1 of a book called Notre-Dame de Paris. His wife recalled: “He bought himself a bottle of ink and a huge gray knitted shawl, which covered him from head to foot; locked away his formal clothes, so that he would not be tempted to go out; and entered his novel as if it were a prison.” (Writers are often swathed in wool, by the way; we sit still all day, so we get cold.)

By the middle of January 1831 the book was, astonishingly, finished. Hugo had written something like 180,000 words in four and a half months. It got poor reviews but the public loved it, and it was quickly translated into other languages. The English edition was called The Hunchback of Notre-Dame, a title at once more vulgar and more alluring. And Hugo became world famous.

The quality of Hugo’s writing is well illustrated by a passage in which he imagines, with spooky prescience, a fire at Notre-Dame:


"All eyes were lifted to the heights of the church. What they saw was extraordinary. At the top of the highest gallery, above the rose window, a tall flame rose between the two bell towers with a tornado of sparks, a tall flame reckless and angry, from time to time shredded into the smoke by the wind.

Below this flame, below the dark balustrade with its glowing leaves, two gutters vomited relentlessly through monster mouths a hard rain that gleamed silver against the dark facade. As they approached the ground, the two jets of liquid lead widened into multiple streamlets, like the spray from the thousand holes of a watering can.

Above the flame the vast towers, each harsh and sharply carved, one all black, the other all red, seemed even bigger because of the immense shadow they cast up to the sky. The innumerable sculptures of devils and dragons took on a dismal look. The restless brightness of the flames made them seem to fidget. There were laughing vipers, yapping gargoyles, salamanders fanning the fire with their breath, and monsters that sneezed in the smoke."

Nearly 200 years later, on April 15, 2019, I was in my kitchen at home when an old friend called. This friend had weathered many crises as a member of the British Parliament and a cabinet minister, but she sounded shocked. “I’m in Paris,” she said. “Turn on your television!”

You know what we saw on the screen: Notre-Dame was on fire. 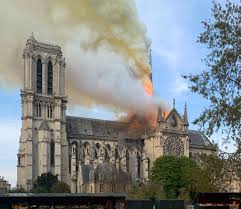 I understood what was burning and how the fire was gathering force, but the journalists commenting did not—and why should they? They had not studied the construction of Gothic cathedrals. I had, in doing research for The Pillars of the Earth, my novel about the building of a fictional medieval cathedral. A key scene in Chapter 4 describes the old cathedral of Kingsbridge burning down, and I had asked myself: Exactly how does a great stone church catch fire?

I had climbed into the dusty spaces under the roofs of cathedrals including Canterbury and Florence. I had stood on the mighty beams that spanned the naves and looked at the rafters that supported the lead roof tiles. I had noticed the dried-up debris that often gathers in such places: old bits of wood and rope, sandwich wrappers left by maintenance workers, the knitted twigs of birds’ nests, and the papery homes of wasps.
On that spring night in 2019, I felt sure that the fire had started somewhere in the roof, probably when a dropped cigarette or a spark from an electrical fault ignited some litter, which in turn had set the timbers ablaze.

Notre-Dame had always seemed eternal, and the medieval builders certainly thought it would last until the Day of Judgment; but suddenly we saw that it could be destroyed. In the life of every boy there is a painful moment when he realizes that his father is not all-powerful and invulnerable. The fall of the spire made me think of that moment.

In 1163, the population of Paris was growing. On the right bank of the river, commerce was surging to levels unknown in the rest of medieval Europe; and on the left bank the university was attracting students from many countries. Between the two, on an island in the river, stood a Romanesque basilica, and Bishop Maurice de Sully felt it should be bigger.

And there was something else. There was an exciting new architectural movement that used pointed arches, letting more light into the building—a look now called Gothic. No doubt it made the older basilica with its round arches seem old-fashioned. So Sully ordered his church to be knocked down and replaced by a Gothic cathedral.

Let me pause. All the above sounds straightforward, but in fact it is astonishing. The Cathedral of Notre-Dame de Paris was erected in the Middle Ages, a time marked by violence, famine and plague. The construction was a huge enterprise, lasting decades. It required hundreds of workers, and it cost a fortune.

That huge building was erected by people who lived in wooden huts with straw roofs. The towers are 226 feet high, yet the builders did not have the mathematics to calculate the stresses in such structures. They proceeded by trial and error, and sometimes their work collapsed. We take for granted our ability to go to a hardware store to buy a perfectly balanced hammer with a steel head for a few dollars, but the tools of the cathedral builders were crude, and steel was so expensive that it was used very sparingly, often for only the tip of a blade. 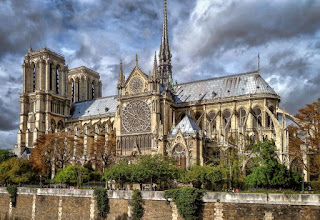 How did such majestic beauty arise out of the violence and filth of the Middle Ages? The first part of the answer is something almost always left out of any history of cathedrals: the weather. The years 950 to 1250 are known to climatologists as the Medieval Climatic Anomaly.

For 300 years the weather in the North Atlantic region was better than usual. The evidence comes from tree rings, ice cores and ocean sediments, all of which tell us about long-term weather changes in the past. There were still occasional years of bad harvests and famine, but on average the temperature was higher. Warm weather meant more crops and wealthier people.

And so Bishop Sully had money to begin his project. He hired at least two master builders, who produced a design. But this was not drawn on paper. The art of making paper was new to Europe and the product was an expensive luxury. Masons drew their designs on a tracing floor: Mortar was spread on the ground and allowed to harden, then the plans were drawn with a sharp-pointed iron instrument such as a nail.

Suddenly Paris needed more craftsmen and laborers, especially masons, carpenters and mortar makers. As word got around, they began to come in from the provinces and beyond, from Italy and the Netherlands and England.

There were women as well as men. The idea that women were too weak for this kind of work is nonsense, but women were plasterers and mortar makers more often than hammer-and-chisel masons. They frequently worked as part of a family team, husband and wife and older children, and it is easy to imagine the man cutting stone, the woman making mortar, and the teenagers fetching and carrying sand, lime and water.

The twin towers were in place by the 1240s. The rose windows, perhaps the best-loved features of Notre-Dame, were a late addition, begun in the 1250s. Probably the last phase was the casting of the bells. The cathedral was more or less built by 1260. But Bishop Sully had died in 1196. He never saw his great cathedral finished.

We often catch our first glimpse of a cathedral from a distance. Our next reaction, as we come closer, is often confusion. It’s a bit like the first time you hear a Beethoven symphony. There are so many melodies, rhythms, instruments and harmonies that at first you can’t grasp how they are linked and interrelated. 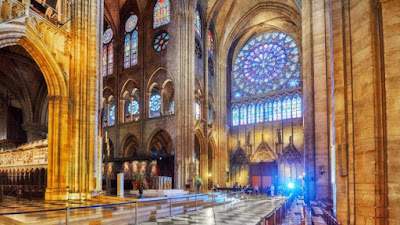 A cathedral, like a symphony, has a coherent plan; its windows and arches form rhythms, its decorations have themes and tell stories, but the whole thing is so rich that at first it overwhelms us. When we step inside, this changes. Most people experience a sense of tranquility. The cool air, the ancient stones, the regular repetitions of the architecture, and the way the entire building seems to reach toward heaven, all work together to soothe the human soul.

When Notre-Dame was built, it drew support from every sector of medieval society—not just the clergy but also aristocrats, businesspeople, city dwellers and rural agriculturalists. Everyone benefited. Jobs were created, commerce was strengthened, markets grew up, migration was stimulated, and new technology was invented.

And yet when you add up all the pragmatic reasons, they’re not quite enough to explain why we did it. There is another element, which is the spiritual, the human being’s need to aspire to something above the material life.

A journalist once asked me: “Don’t you hate all the tourists in their shorts with their cameras?” No. Cathedrals have always been full of tourists. In the Middle Ages they were not called tourists, they were pilgrims. But they traveled for many of the same reasons: to see the world and its marvels, to broaden their minds, to educate themselves, and perhaps to come in touch with something miraculous.

Our encounters with cathedrals are emotional. When we see them we are awestruck. When we walk around we are enraptured by their grace and light. When we sit quietly we are possessed by a sense of peace. And when one burns, we weep.

When Notre-Dame’s spire fell earlier this year, the French President Emmanuel Macron said Notre-Dame would be rebuilt in five years. One of the French newspapers responded with a headline that translates: “Macron Believes in Miracles.” But French attachment to Notre-Dame is profound. Every road sign that tells you how far you are from Paris measures the distance to kilometer zero, a bronze star embedded in the pavement in front of Notre-Dame.

Besides, it is always unwise to underestimate the French. If anyone can do it, they can. 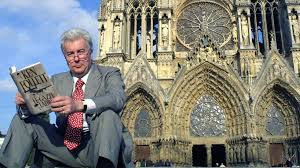