(Ronald Brownstein's article from the CNN OPINION on 23 February 2020.) 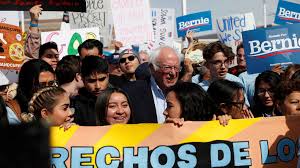 (CNN)Vermont Sen. Bernie Sanders' big win among Latinos in Saturday's Nevada caucuses underscores the potential for the nation's largest minority group to reshape the next stage of the Democratic presidential race.

Almost all of the states with a large Latino population will vote in just the next four weeks: Nevada led the way Saturday, followed by Texas, California and Colorado on March 3, or Super Tuesday, and Arizona, Florida and Illinois on March 17. Cumulatively, the seven states with large Latino populations looming on the calendar will elect nearly half the Democratic delegates at stake in February and March.

This clustering will provide Latinos their best opportunity to influence the choice of the 2020 Democratic nominee. And it represents a key opportunity for Sanders, who has devoted enormous effort to organizing among Latinos after most of them backed Hillary Clinton during their 2016 contest for the nomination.


That effort paid off in Nevada where entrance polls showed Sanders winning a stunning 53% of Latino voters, three times as much as the next closest competitor (former Vice President Joe Biden at 17%).

That marked a significant expansion of Sanders' coalition beyond the universe of younger and very liberal voters who powered his bid in 2016 and provided the core of his support in the Iowa and New Hampshire races that kicked off the 2020 race.

Sanders' team now expects he will benefit not only from improved performance among Latinos, but greater participation in the primaries from them too, as they turn out to express their opposition to President Donald Trump. 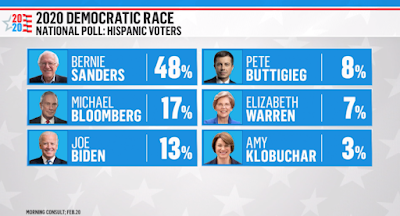 Sanders is breaking barriers with young Latinos. Now he just needs them to vote. "You are going to see much more intensity in the Latino community and I think that's going to have a big benefit for him in a whole host of states," says Jeff Weaver, a senior adviser to Sanders.

Both in 2008 and 2016, Latinos came together to provide a critical mass of support for Clinton. In each of her two presidential races, she carried almost exactly three-fifths of all Latino voters, according to cumulative analyses of all the exit polls conducted in each contest. Although Sanders won the youngest Latino voters, the analysis found, his support declined steadily among older generations.

Until Nevada, no candidate this time appeared to consolidate nearly as much support among Latinos. "I think it's a much tighter contest this year than in 2016," said Matt Barreto, managing partner and co-founder of Latino Decisions, a Democratic polling firm that focuses on Latino voters, a few days before the Nevada results.

Biden has been attracting the second most support among Latinos, though former New York City Mayor Michael Bloomberg, fueled by a barrage of Spanish-language television advertising, is quickly establishing a beachhead too, Barreto says. Bloomberg did not compete in the Nevada contest.

So far, the campaigns and media alike have focused more attention on the group of Southeast states with large African American populations that will also be voting over the same period. That list starts on South Carolina on February 29 and runs into mid-March through states including Alabama, Arkansas, Georgia, Mississippi and North Carolina. Biden, in particular, is relying on those states to recover from his extremely weak showings in the first two contests.

The potential impact of Latinos, mostly in Southwest states, that will be voting at the same time has generated much less discussion. "I really do think there is almost a total denial of the emerging Latino vote in the United States," said former Illinois Democratic Rep. Luis Gutierrez, who played a leading role on immigration issues until retiring from the House in 2018. "People say statistically they say we will outnumber any minority group, but when I read my favorite newspapers, watch my favorite newscasts, we're absent." 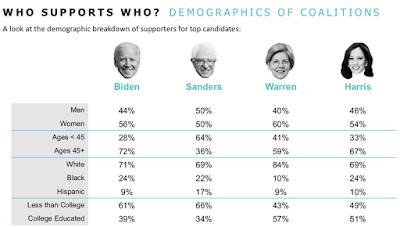 From Nevada through March 17, the Democratic primary calendar will run through seven of the 12 states where Latinos constitute at least 10% of the total eligible voting population, according to recent figures from the Pew Research Center.

New Mexico, the state where Latinos comprise the largest share of eligible voters (at almost 43%), doesn't vote until June. But all of the states that rank next on the list for Latino presence are voting in this upcoming rush. That includes California (30.5% of eligible voters), Texas (30.4%), Arizona (23.6%), Florida (20.5%), Nevada (19.7%) and Colorado (15.9%). Latinos represent almost 12% of eligible voters in Illinois, the other state voting soon with a large concentration of that population.

In a Democratic primary, the Latino share of the vote in most of those states will likely be larger than their share of the overall eligible population. Barreto said all indications in polling points to high Latino turnout in the upcoming primaries. "There is a very high level of interest," he said. "When you get to the Super Tuesday states we are expecting extremely high turnout in California and Texas." 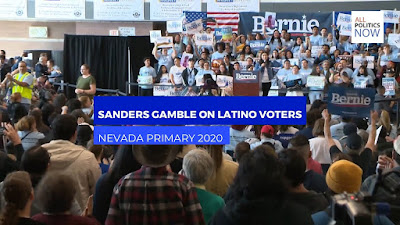 (Keep on reading at the CNN Opinion)